Warrengate -The Whitewashing of Case 12-533

UPDATE: The lead investigator heading this case has left. Lawrence Scott is no longer with the DOE. No word on replacement yet.

What secrets lay within the $7 Million budget of 101 Warren Street, Berta Dreyfus IS 49 How much is it costing the taxpayer and the students How many of the other 1,800 schools are in the same situation 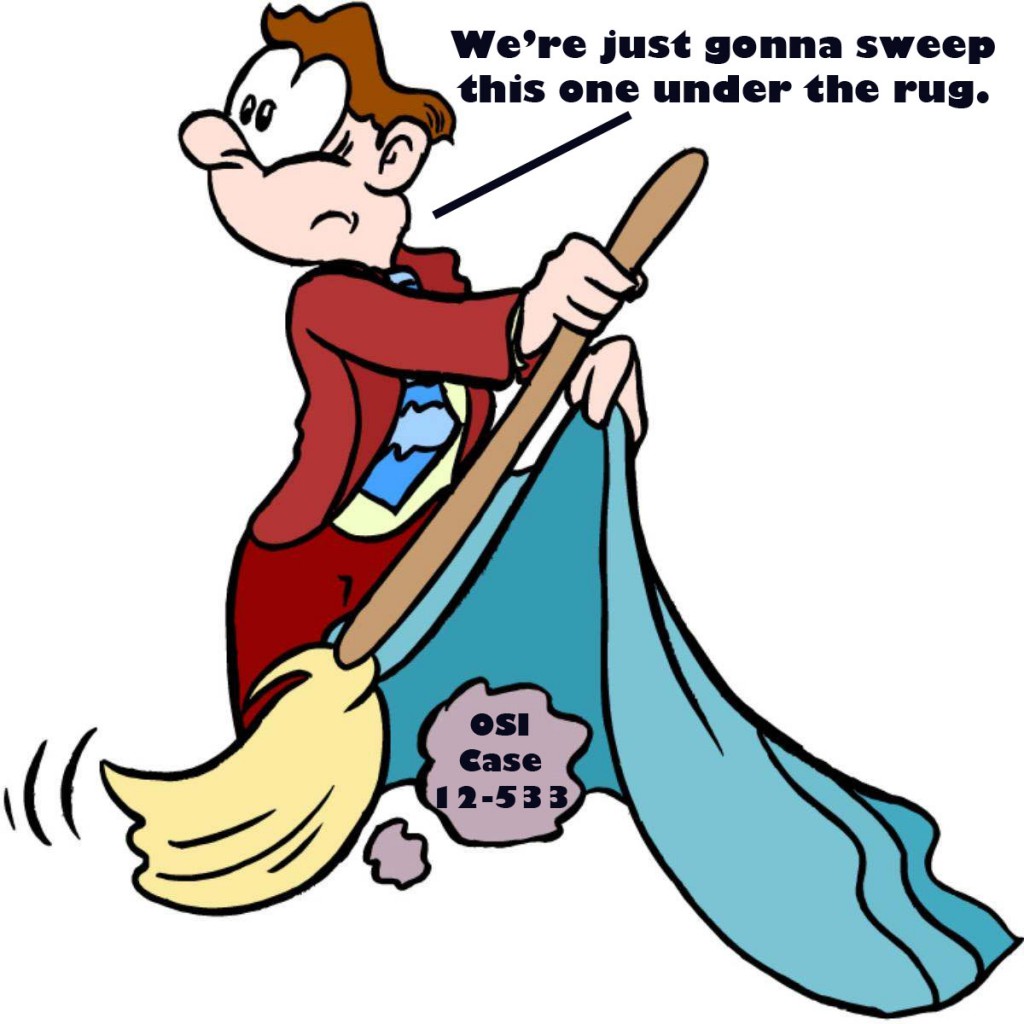 Everyone who pays taxes and cares about students should keep a close eye on this case. If we don’t, it may continue to be whitewashed.

Whitewash: ” To whitewash is a metaphor meaning to gloss over or cover up vices, crimes or scandals or to exonerate by means of a perfunctory investigation or through biased presentation of data.[1] It is especially used in the context of corporations, governments or other organizations.” Thanks Wikipedia.

I have over 32 cases/investigations started on me. They are consecutively numbered and the first is coded 12-537. In other words the 537th intake complaint of year 2012 by the Special Commissioner of Investigation. It was initiated by Principal Linda V. Hill and former UFT Chapter Leader Richard Candia on January 30, 2012 at around 1:45PM.

I feel as though Case 12-533 is the equivalent of the missing audio tapes from the Watergate scandal. It’s a mystery and the attempt to cover it up is deeply rooted from the brick and mortar of Berta Dreyfus IS 49, through the district and political offices of Staten Island, 65 Court Street, the Special Commissioner of Investigation and all the way to the Tweed Courthouse.

During the 2011 school year, former UFT Chapter Leader Richard Candia would tell us that Principal Linda Hill was working the School Leadership Team (SLT) and the Dreyfus Achieve Now Academy (DANA) at the same time. He once told me “Frankie, I got stuff on her that would get her arrested, not fired. I’m going to superintendent with it.”

“Why didn’t we report this” you ask Quite frankly the Chapter Leader told us he had met with Superintendent Erminia Claudio and actually met with her for hours. Turns out that after one of his meetings with the Superintendent and Principal Linda Hill, he received a Counseling Memo in his file. Sound familiar I met with them on February 14, 2012 and received a disciplinary letter for staying 27 minutes too late. You speak up, you get disciplined. He then shut his mouth like an obedient puppy. I on the other hand did not.

In January 2012 I attended one of our SLT meetings. I waited in the main office with the other teachers and parents. Sure enough Principal Hill, while working on the clock for the Achieve Now Academy, opens her office door and says “Come in.” She doesn’t walk to the digital time clock to clock out and is allegedly now also getting paid to sit on the SLT.

“That’s interesting” I thought. Rich seems to be right, but I wondered what the status of this investigation was.

It turns out there didn’t seem to be an open investigation. See text from Richard Candia (in gray bubbles) to me soon after the meeting and right before he turned on me and other members: 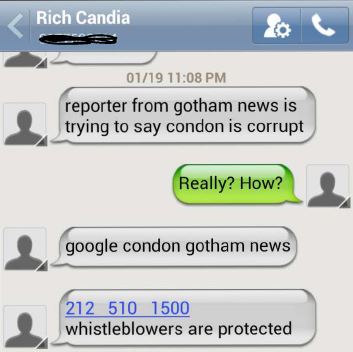 The attacks on me continued, after I questioned the budget in December 2011, I thought “If I am being called a ‘hindrance to the community’, then there must be something going on with the finances of the school. This should be investigated.”

On January 26, 2012 I sent an email to the Special Commissioner of Investigation,Richard J. Condon. I not only stated that we believe the principal is engaged indouble dipping, but I also handed over three years worth of SLT minutes showing Principal Hill in attendance. What I didn’t have, but SCI was easily able to obtain, was the Achieve Now Academy payroll information. It would take anyone about a half hour to compare the times once they had the information. That was over 617 days ago and it is still an open case.

In return I received an email stating that SCI will not investigate this and are referring it to the DOE’s Office of Special Investigation. Me being extremely naive, thought “OK, so the DOE, who claims ‘CHILDREN FIRST. ALWAYS.’ as their motto would take care of this.” Again that was over 617 days ago and it’s still open.

For the month of February I basically played possum, dead, flew under the radar. What was happening behind the scenes was a strategic build up of fabricated evidence against me. People involved included DOE lawyers Marisol Vazquez esq. , Robin Merril and Robin Singer esq., Principal Linda Hill, SLT Chairperson Susanne Abramowitz, UFT Chapter Leader Richard Candia, Superintendent Erminia Claudio and many others. Read my post 3,000 pages of secret emails to see who else from top brass was involved.

Now it’s March and April 2012. The attacks continue and I get my first gotcha observation and my computer equipment is confiscated while I’m teaching. I call OSI to follow up. I speak to the investigator who was assigned and is still assigned case 12-533. His name is Lawrence Scott. During the conversation he says “I don’t know who you are. Are you the blogger” I assumed he meant this blog and I said “yes”. I was not anonymous and two weeks later I was removed from school. There are a few things that were stated during the conversation that made me question where this investigation was going to go. Investigator Scott asked me “Well how do I know you aren’t double dipping or engaged in theft of service” What They were trying to turn the tables Then he mentioned that he wasn’t given all three years of SLT minutes. “How could that be It was one file with three years worth of minutes.” I thought. “Did SCI refer the case and not the evidence”

I decided to do my own investigation. The missing link was the time cards and respective payments to the Principal for that Achieve Now program. I FOILed her time cards. Some trickled in in June and after a year I finally got all of them. The evidence was damning. It was actually worst that we thought.

See an example here. The SLT met at a restaurant for the June 1, 2010 meeting. Principal Hill apparently never made it back to school to clock out of the other program she was also getting paid for and just hand wrote the time. Again, the time for a program she wasn’t working.

From: SLT Member
Date: May 14, 2010 1:53 PM
Subject: June 1st Meeting
To:
Cc:
Hello All
As per the SLT Meeting on May 4th – a reservation was made at Es-Ca in the Dongan Hills area.
Below is the contact information
Esca Restaurant
Italian
1559 Richmond Rd
Phone: (718) 980-5006
The Reservation is under ” ” table for 13.
Also I will have the time sheets for your signature.
Any questions please let me know

She was allegedly paid for both that SLT meeting and paid about $142 for Achieve Now Academy. See spreadsheet at the bottom of this post. 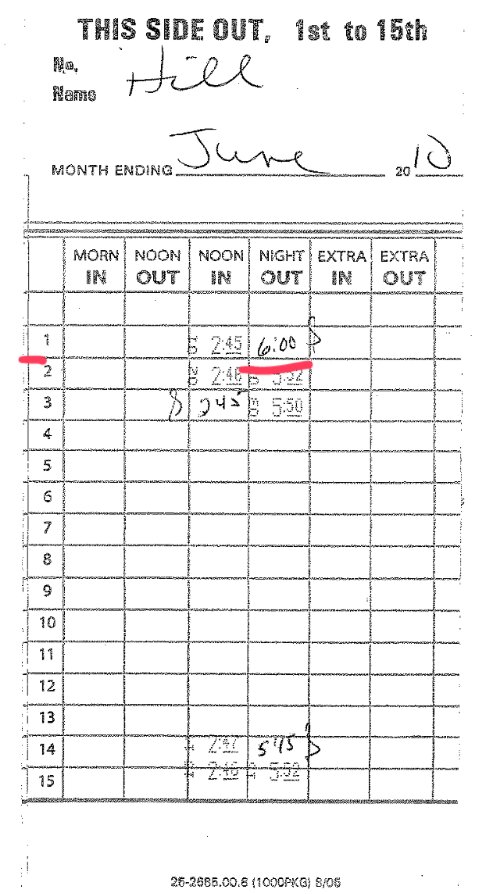 LIS Ed Seto signed per session, but Erminia Claudio did not

It’s interesting to point out that the Achieve Now Academy program is run through the Office of Safety and Youth Development (OSYD). When I spoke to Harmon Unger, Deputy CEO, he told me it was being investigated, BUT they wound up allowing the principal to not only access the funds, but increased her budget to $100,000. Also, OSYD has been involved in my case and even sent extra security to public meetings they knew I was going to attend. When video surveillance of administrator misconduct with a child was reported, OSYD personnel stated “the video archive could not be found.” (Frank Jordan District 31 Safety Director).

“But Mr. Portelos, couldn’t you have reached out to other agencies”

Excellent question. I actually did.

“Who you gonna call”

Taxpayers…make the call. Don’t just read this and think it will be resolved. This case has been open for over 617 days. Why It’s because the guy blogging from the Rubber Room can’t be right. The Bloomberg administration could not have let this happen here and countless other schools right under their nose.

Lawrence Scott’s bosses are Deputy Director Christopher Dalton and Director Candace McLaren. Candace McLaren’s boss is Courtenaye Jackson-Chase, the DOE’s top attorney. Who is she She is actually the one involved in removing me from school along with former HR Executive Director Andrew Gordon.

“Wait Mr. Portelos. Are you telling me the people investigating your principal are the same who were involved in keeping you out of the school for over 527 days”

I would call and email the following people and ask them to wrap up Case 12-533.

or email them all by copying and pasting this:

Spreadsheet of Principal Breakdown below. 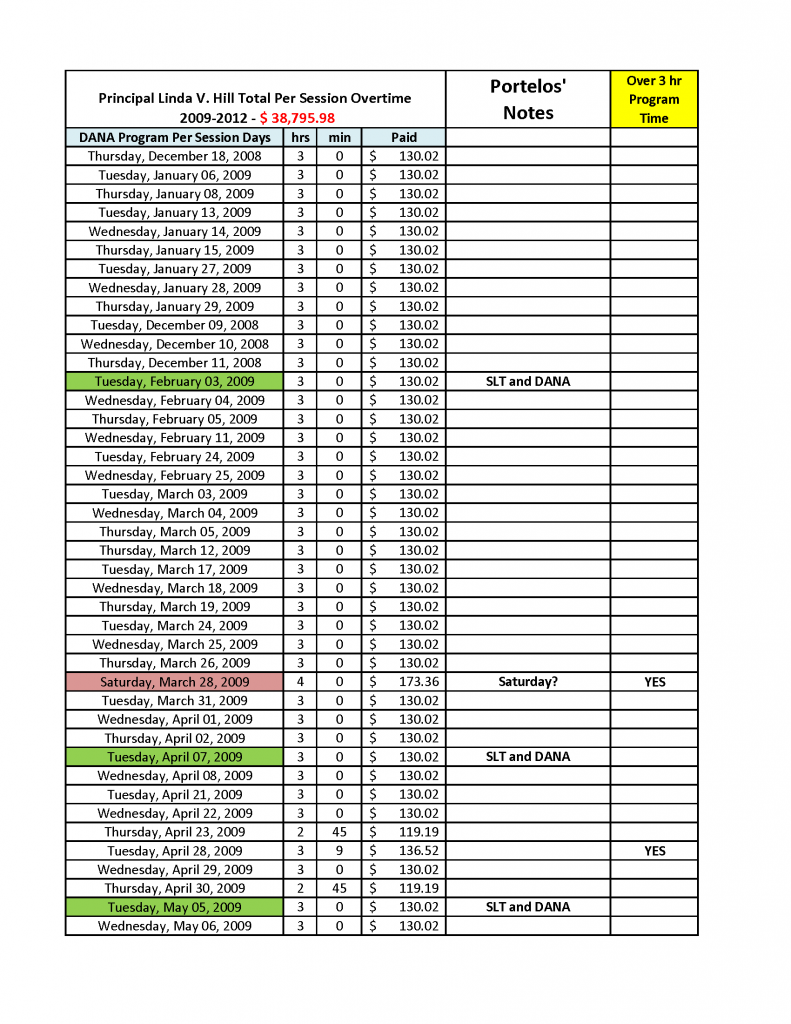 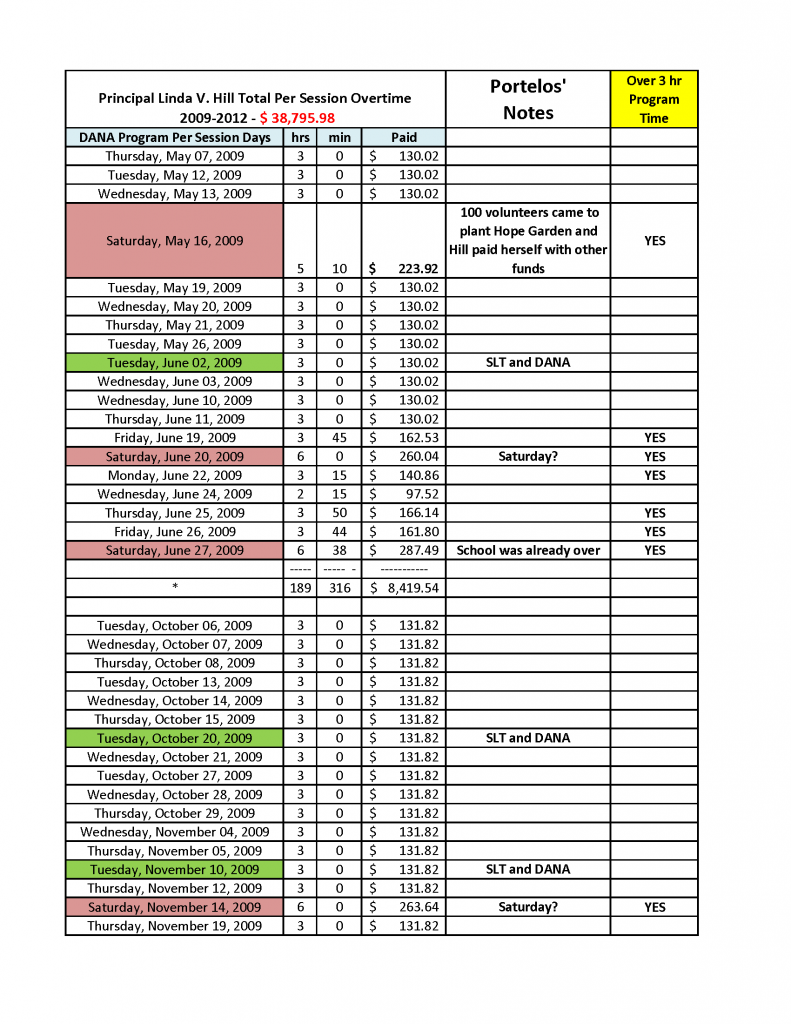 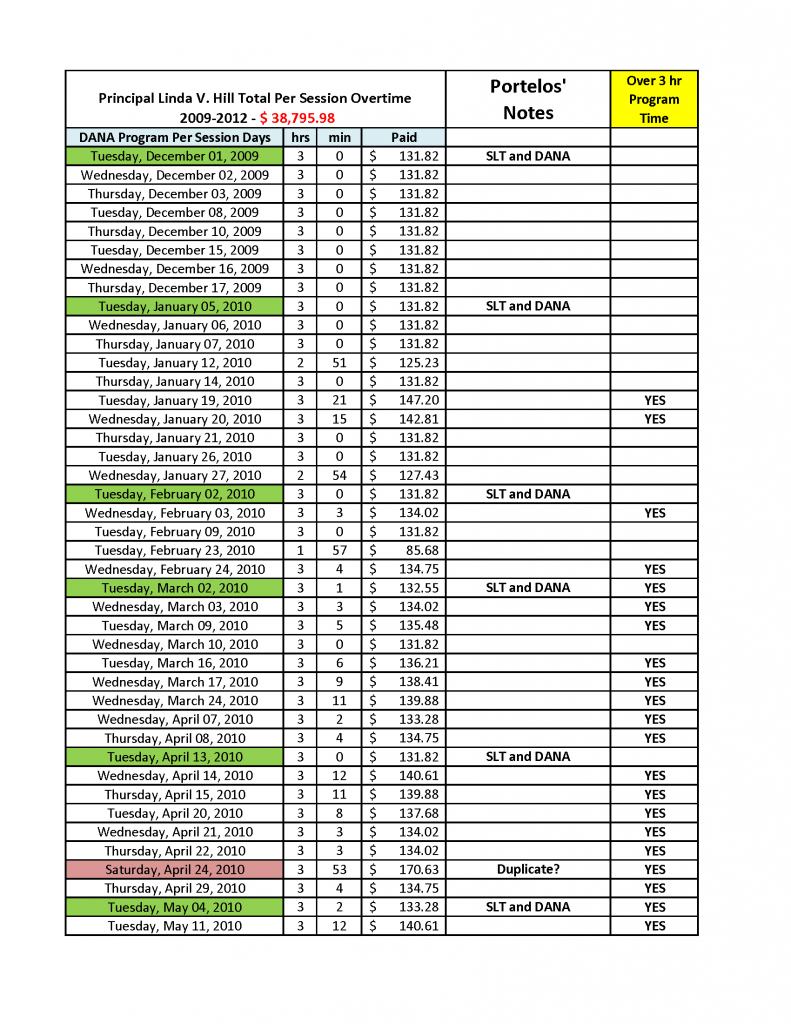 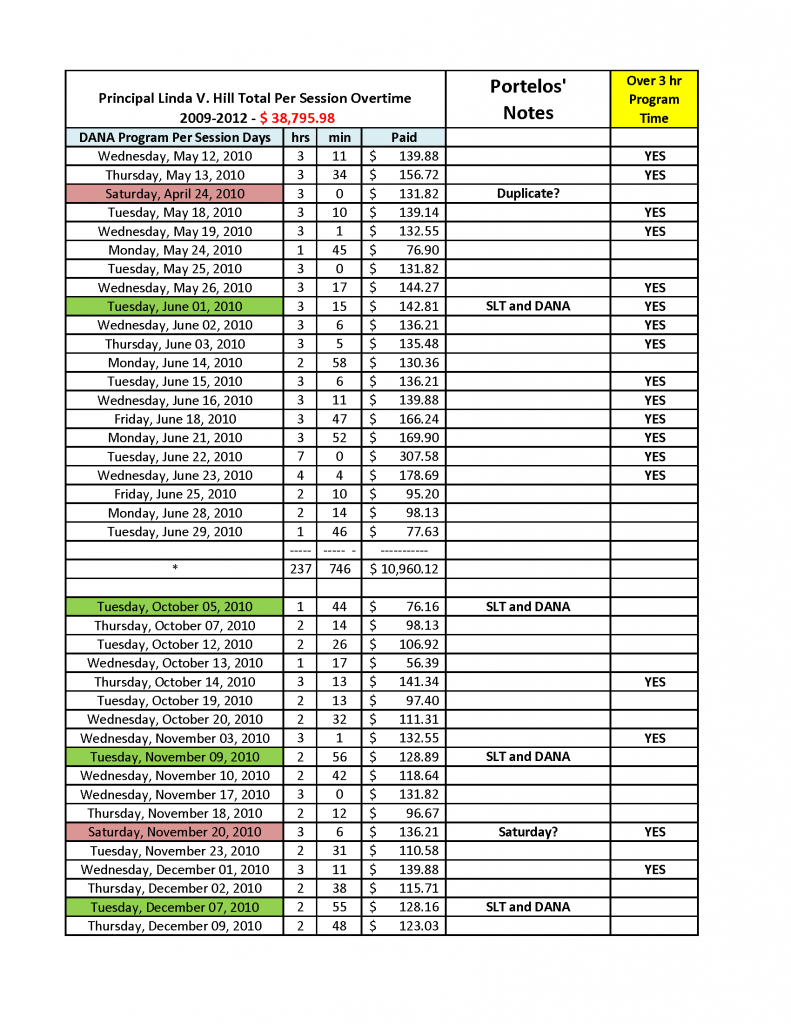 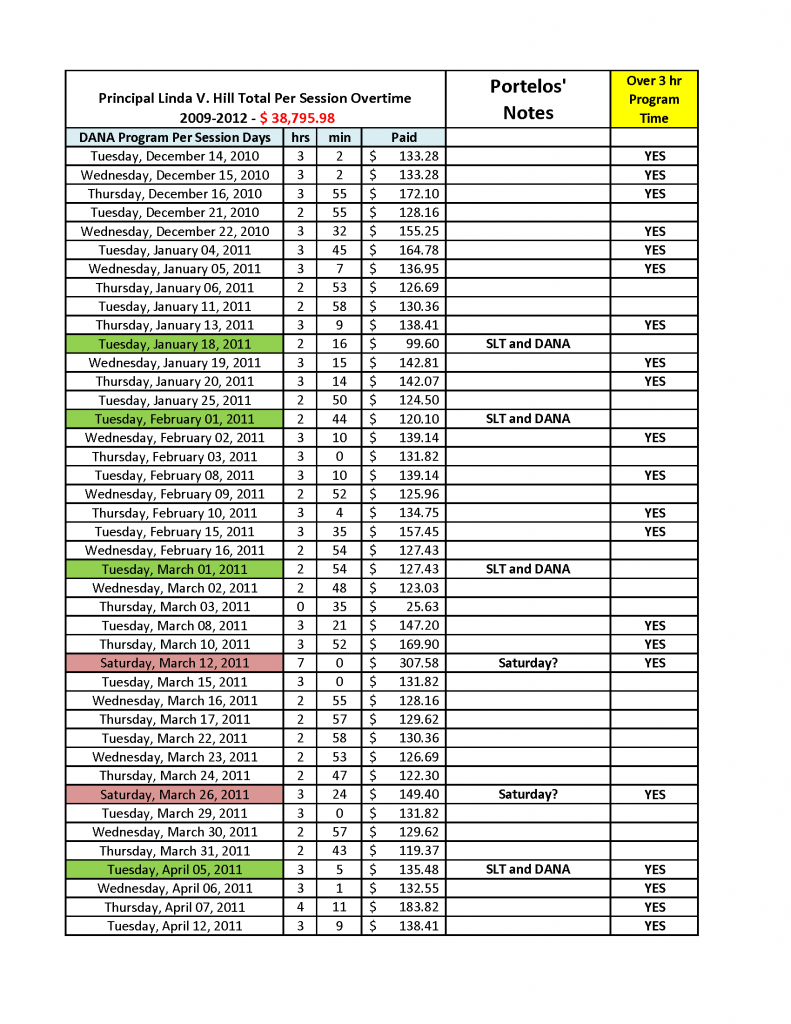 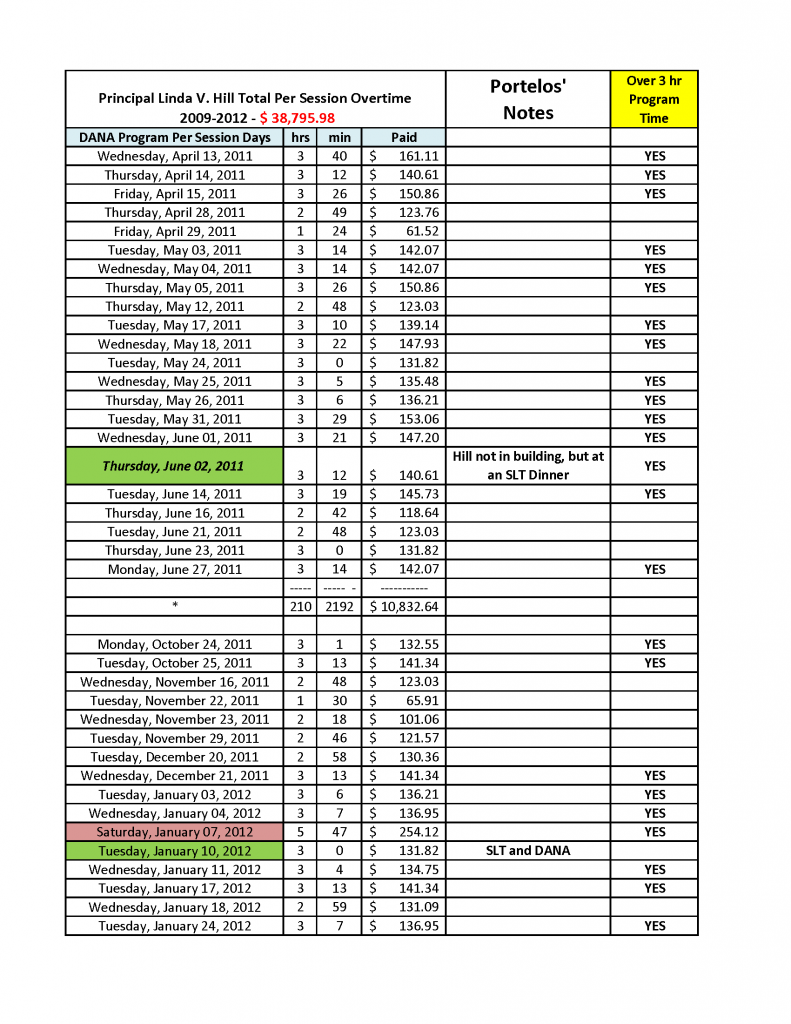 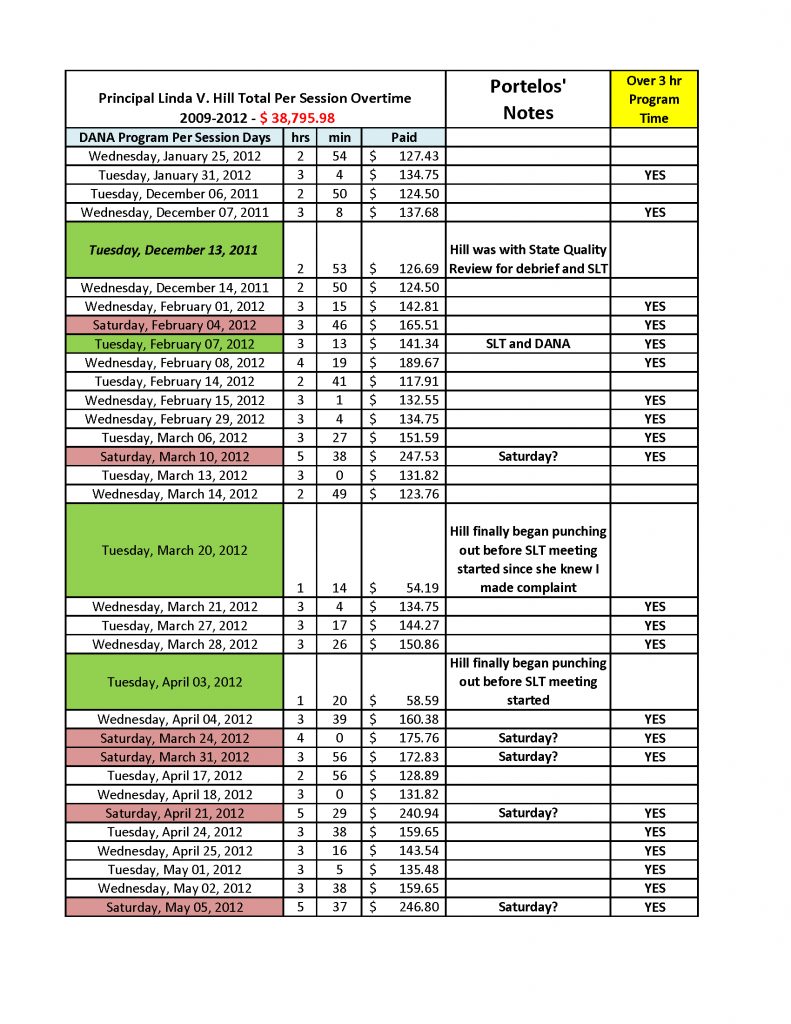 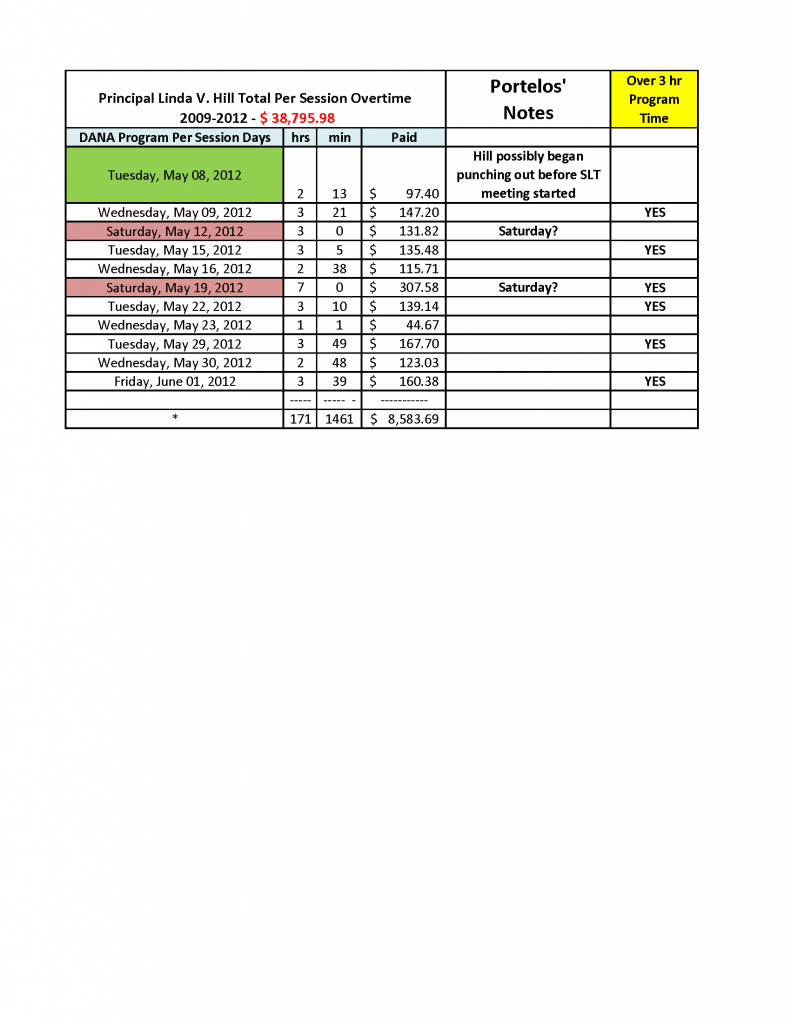 “Yeah, why do you think she [Principal Hill] is not retiring She is making a killing beefing up her pension with DANA”

-unnamed IS 49 teacher in the library one day.