I’ve been blogging about the injustices that have transpired since March 2012. A month after started publishing news of the attacks against me, I was removed from my state of the art STEM Lab and exiled to a dirty, damp basement storage room/cafeteria (see below). Did that stop me from reporting the injustices No. Like I said way back on my first post …”You can’t break Portelos.” 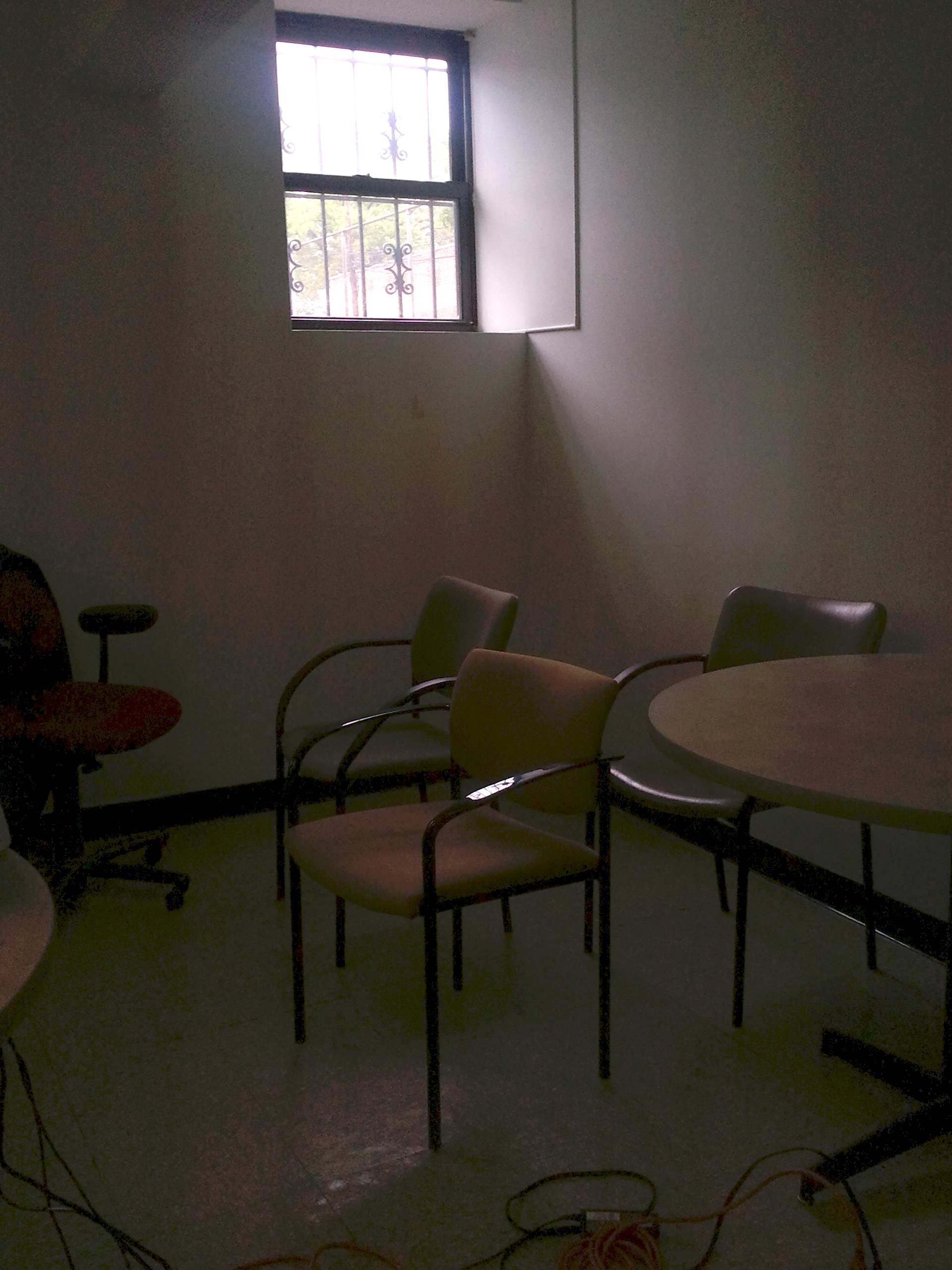 I decided posting an new article chronicling my day to day plight would be too much for viewers to follow. I instead created a page on this blog called “Rubber Room Journal” and was writing my “Dear Diary” there. There came a time however when I felt words were not enough. The taxpayers had to see with their own eyes. A year ago today, October 4, 2012, I did something interesting and unexpected. I walked into my solitary confinement, in room 307 of 8201 Rockaway Blvd., Queens, NY and thought “Let me try something different. I’m a tech savvy guy.”

I aimed the tablet camera at my usual sitting area, clicked on the Ustream.tv app and then business as usual…nothing. I then thought “Let me just click it on and send the stream to a few friends on Facebook, who have been supporting me from day one.” A little later I thought “Let me click the Twitter share button”. What happened next was unexpected. The Associated Press grabbed on to the story and Tweeted it. I started getting calls and emails from Yoav Gonen of the Post, Daily News and by 8PM that night NY1 was in my living room.

I couldn’t believe what was happening. I have been blogging about this for months and the press knew that the UFT and DOE lied to the public about closing the Rubber Rooms in 2010. That next morning I forgot about it until our house phone rang while we were still sleeping. It was Steve Cohen from Fox 5’s Good Day NY. He said they were watching the recorded stream from the night before in the studioand he made a reference like “You got some pair of …..” He wanted me to call in the show.

On the way to “work” I called in (Video Below)and started receiving more calls from other news stations. I thought I will be frisked and tackled when I get into the building. I kept looking around the corner waiting to be ambushed since Rosanna Scotto stated “Mr. Portelos, the DOE told us you are under strict supervision…”

Then I walked in to Room 307 and again…nothing.So I set up my devices and did it again. This time it got even crazier. The viewership was out of control. During lunch I did interviews with Channel 2, 4, 7 and 11. On the phone I was on 1010 WINS and even Univision (via translator). It became a media frenzy that I didn’t anticipate, but did not regret… The Rubber Room is Retaliation and the public needed to know.

After that day I was contacted by Huffington Post, Inside Edition sent a car for me and Fuji TV (Japan) wanted me on their morning show. Yahoo News called me and said “You are trending!” I replied “Really, cuz my wife says I dress like an old man.”

Friends around the country were telling me they saw me on TV and I was in articles in the UK and Australia. Did I personally want the media attention No, but did I want the people to know how we exile educators who speak up Yes.

I was called into an office when I came back the next Tuesday, October 9, 2012. Children First Network Leader Jean McKeon and Coach Sharon Mahabir told me “Mr. Portelos, you will be now creating lesson plans for your substitute.” They were bluffing and DOE Legal messed up again with their bad advice. I wrote lesson plans for nothing and they were never given to the countless subs covering my class.

Well, a year later I am now in a records room in Bay Ridge filing student folders. Can I Live Stream that Sure, but I don’t think it’s necessary as you can just picture me in a shirt and tie putting folders into filing cabinets. I have a Bachelors degree in Civil/Environmental Engineering from NYU Poly. I have a Masters in Science Education. I have two teaching licences for grades 5-12. I have a US Patent pending approval for faceshop.me. My teaching methods were published. Again….I’m paid $75,000 to file folders and there has been no criticism for my pedagogy.

You can peruse through my blog to see what has happened since, but take a look at the short video news clips from last year. Money well spent

There was a two year gap of articles from 2010 to 2012 where the words Rubber Room were not really mentioned in the press. Now you see that this video below was a farce.