Happy Friday Everyone! Wrapping up DOE Administrator’s “Not So Confidential” Emails Week, we end with this one, for now. In case you stumbled upon this post first, I suggest you first read the first 3 to get a feel of where these emails are coming from.

By the way these emails are publicly accessible via the Freedom of Information Law (F.O.I.L.) as well. Be prepared though as Joseph Baranello, the DOE Records Officer, and his office will delay, delay, delay so it’s easier for some people to deny, deny, deny.

*Note: The payroll secretary above does not have access to the principal’s per session.

“Ok Mr. Portelos. What’s the big deal Can’t a principal be sick and not come to work”

Of course they can. We all have immune systems that sometimes temporarily lose the fight, but the problem lies in these payroll entries below. It appears as though, she was paid a sick day and either came in to work after school, OR was clocked in by someone else. (See Regulation C-175) I FOILed her time cards a month before I was removed from school. A week or so later a man in a suit came and collected the time cards and I received the complete set over a year later. See November 2011 below for The Office of Safety and Youth Development (OSYD)’s Achieve Now Academyprogram(<–Click Here to See it’s a $2.5 Million a year program). 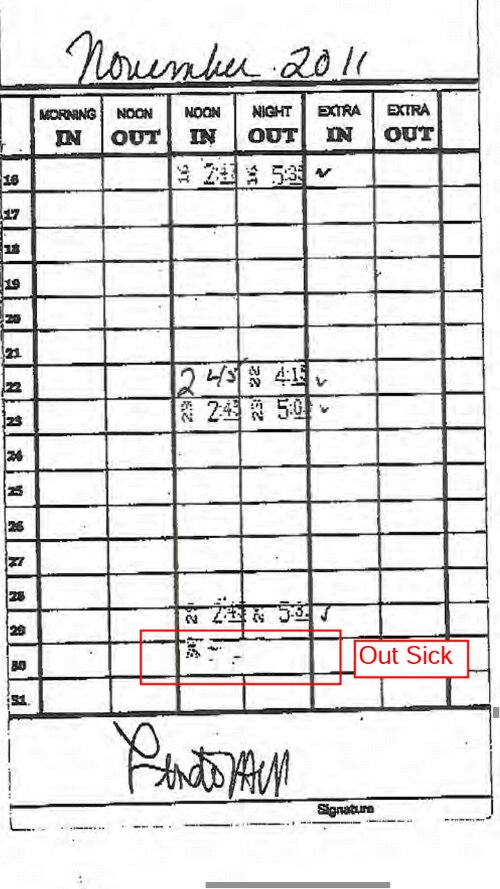 Can you find the issues with this Time Card above besides being clocked in the 29th of November It seems that she was also clocked in on November 30th and then white-out was used. Typically you initial next to a white-out mark. Also there was a hand written entry on the 22nd and typically your supervisor initials those as well.

“Mr. Portelos, perhaps it was a mistake and just whited-out. Do you know if she get paid for the 29th of November” Actually I think I do as I also FOILed her per session payroll spreadsheet (Click here for the entire file). See snapshot below. 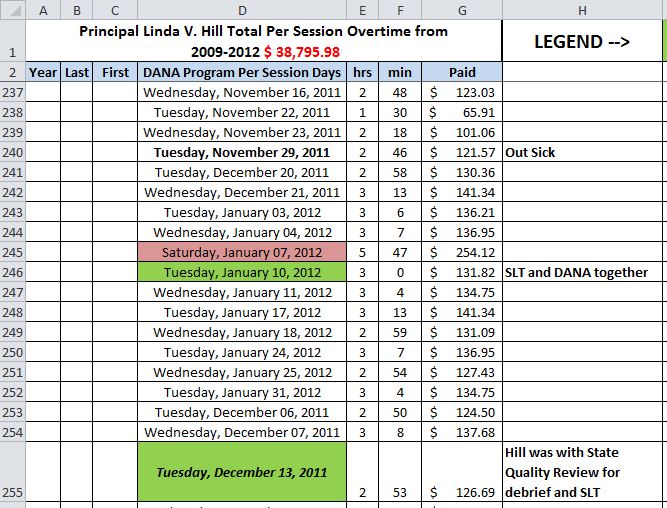 Principal Linda Hill out sick and making per session

Don’t worry tax payer. The investigative bodies were aware of this for some time. In fact I gave SCI information in the email below sent just two business days before my 25+ investigations started. Commissioner Richard Condon decided not to take this case and instead give it to the DOE to investigate. The DOE’s Office of Special Investigation (OSI) has been supposedly investigating this case (Case 12-533) since February 2012. “Did OSI ask you for more information or interview you Mr. Portelos” They sure did. I was called in as a subject to a new investigation and then asked me for more information on this case on…ready…. April 2013. Yes over 14 months later.

To:“rcondon@nycsci.org” <rcondon@nycsci.org> SCI
Subject:Principal Possible Double Dipping
Mr. Condon,
It appears that Principal Linda Hill of IS 49 in Staten Island has found the Goose that lays the Golden Egg. She acquired the DANA program for the school a couple of years ago. It is basically a program for students who were left back and given a chance to catch up by attending after school classes until 5pm. I really do not know the details, but apparently there are a lot of hours punched in and no one to oversee this.Personnel have been observed to carry several punch in cards and punch them all in for members not present including the Principal. They have noticed that she has been out stick, but suddenly appears at the building for this program.
This might be hard to prove, but what may be easier is the fact that as a member of the SLT, which already gets a stipend, she also punches in (or is punched in and out) for DANA with per session. She already gets paid to sit in on one meeting yet is punched in for DANA
To see some evidence one would have to simply cross reference the minutes of the SLT with her per session card . See attached.
———————————-
From:Joseph Catapano <jcatapano@nycsci.org>
Sent:Tuesday, February 7, 2012 8:49 AM
Subject:2012-0597 R-OSI IS049

Please be advised that the information you reported has been reviewed by the Office of the Special Commissioner (SCI) and the decision has been made to refer the matter to the Chancellors Office of Special Investigations (OSI) for appropriate action. You can contact OSI at718-935-3800or atOSI-INQUIRIES@Schools.nyc.govfor further information.
Thank you,
SCI
———————————-
The DOE investigating the DOE is like Michelle Rhee investigating test tampering in DC.
“What happened to that Achieve Now program Mr. Portelos” Oh actually it’s going very well. After I submitted complaints about possible fraud, they not only kept Principal Linda Hill in the building with access to it, but also increased her budget from $75,000 to $100,000 this year. This is an issue I raised with Harmon Unger of OSYD a couple of months ago. It’s like putting a drug addict to work at a medical marijuana facility. Or a tech savvy parent/teacher to work at a Children First Network facility.
It should be noted that Double Dipping seemed to have ceased after March 2012
Enjoy your weekend.
and yes this has been submitted to USDOE, NYSED, NYS Comptroller and NYC Comptroller. Actually I believe the NYS comptroller’s office is overseeing the OSI investigation and NYC Comptroller John Liu’s office told me they called OSI office22 times to follow up since November 2012.

Here is where I gave Mayor Bloomberg and Chancellor Walcott one of many chances to resolve this. Instead they ignored and will be leaving office, in a few months, with a poor education legacy. Don’t take my word for it. Just listen to the mayoral candidates.

Parent and Educator fighting for the student and the teacher.
View all posts by Francesco Portelos →
Tagged  Joseph Baranello esq.
Bookmark the permalink.