I own a domain, dreyfus49.com, that is not the Department of Education’s. Principal Hill of IS 49 used it for her professional correspondence and even forwarded two years worth of private DOE email to it. According to the policy she checked off as agreeing to use the site, she agreed that the domain administrator would have access to her email and her data. That wasn’t my master plan when I created and paid for the site back in 2009. It was to be a great communication hub for the school and that is exactly what it turned out to be (See 2011-2012 Quality Review). Then I raised concerns about school budget and other misconduct and they tried to shut me out of it.

In March 2012 I was told to shut it down, but the data remained. As I was withering away alone with little support from the attacks of my administrators and some peers, I contacted Google Inc., who agreed that I had every right to go into the emails as per their Privacy Policy. I will now start sharing some of them. I’ll start off slow as some of them are very disturbing and of public concern.

On January 29, 2012, Principal Hill sent an email to the entire staff and she spoke negatively about me. She didn’t mention me by name, but admitted this during a federal deposition in April. At the very bottom of this email she added a brain teaser and the first five staff members to respond received Staff Stock, which can be redeemed later for parking passes. Keep in mind that I am Greek.

“Another brain teaser and a last attempt to earn more Staff Stock for this terms parking permits:Do you know your Greek philosophersWhich one said the following(Of course Staff Stock is awarded to the first 5 staff to respond)

Those who have virtue always in their mouths, and neglect it in practice, are like a harp, which emits a sound pleasing to others, while itself is insensible of the music.

I received many emails and calls about this, but nonetheless I replied with Diogenes, the author of the quote.

Look at the responses below I found. Does she have a problem counting or a problem with with me The next day my perfect record was tainted with the first three of over 25 allegations and first two of three disciplinary letters. 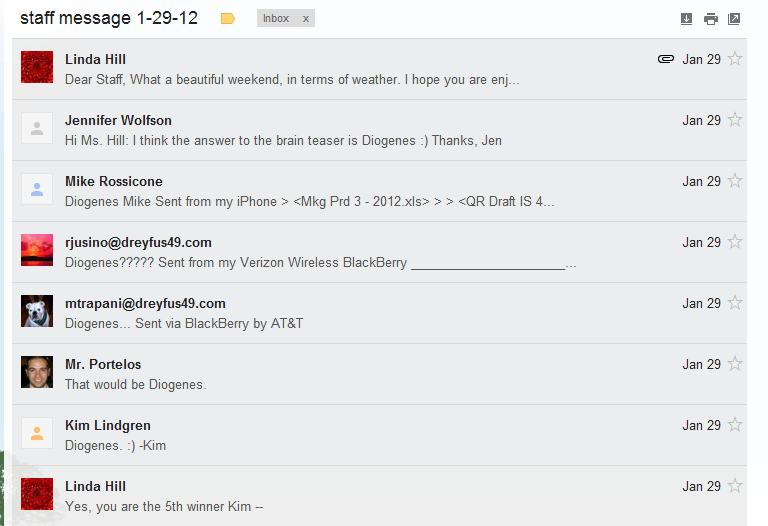 Sorry Kim, but that was my Staff Stock. 😉 (I wound up winning a parking permit anyway the next month)

Nice. That’s what we want in an educational leader…integrity and unbiased decision making.

More emails on the way…

Sneaky on my part As DOE attorney Kerri Crawson stated once: “Information is Portelos’ weapon of choice“. She is right and the information is scary and of public concern and therefore of great concern to the DOE. Hence why I type this from a Rubber Room cubicle 20 miles and 404 days from school.

Speaking of Diogenes, I like this quote from him:

“As a matter of self-preservation, a man needs good friends or ardent enemies, for the former instruct him and the latter take him to task.” True!