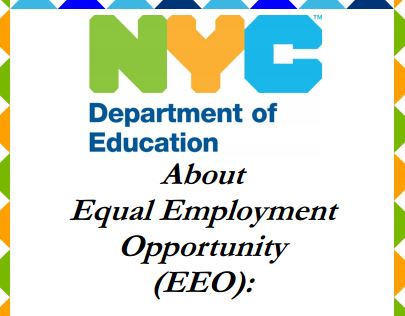 Depends on who is making the decisions

“It is the policy of the Department of Education of the City of New York to provideeducational and employment opportunities without regard to race, color, religion,creed, ethnicity, national origin, alienage, citizenship status, age, marital status,partnership status, disability, sexual orientation, gender (sex), military status,prior record of arrest or conviction, except as permitted by law, predisposinggenetic characteristics, or status as a victim of domestic violence, sexual offensesand stalking, and to maintain an environment free of harassment on any of theabove-noted grounds, including sexual harassment or retaliation. This policy is inaccordance with Title VI and Title VII of the Civil Rights Act of 1964, Title IX of theEducation Amendments of 1972, Age Discrimination in Employment Act of 1967, Section503 and Section 504 of the Rehabilitation Act of 1973, Fair Labor StandardsAmendments of 1974, Immigration Reform and Control Act of 1986, The Americans withDisabilities Act of 1990, Civil Rights Act of 1991, New York State and City Human RightsLaws and Provisions of Non-Discrimination in Collective Bargaining Agreements of theDepartment of Education of the City of New York.”http://schools.nyc.gov/NR/rdonlyres/AB2B879B-D8E6-42BA-8D2B-5412784C44E3/103229/OEOColorKnowYourRightsBookletPublisher41311PDF.pdf

I would like to state that I am all for diversity in the workplace and am very against race or gender being a factor in anything. As you may have heard, I have a real estate license as well. If an owner ever told me that I should shy away from selling/renting to [insert race here], that would be the last I work with that owner.

Having said that, see the below “not so confidential” email from Principal Linda Hill to a college which graduates teachers. I thought the above statement indicated “employment opportunitieswithout regard to race, color, sex“ 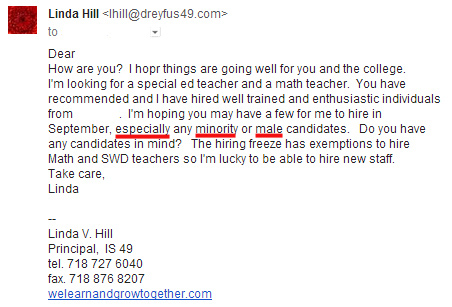 I redacted the recipient’s name and school. Not relevant. What is relevant is if a very qualified non-minority non-male lost out because Principal Hill was preferring the opposite. I also redacted the date, so that staff hired that year won’t feel that they just made it or were hired based on the color of their skin or gender.

“Mr. Portelos, did you contact Mecca Santana and the NYC Office of Equal Opportunity” No. I’m not going to make that mistake again. I went higher. After I filed a complaint with NYC DOE OEO, last year, the assistant principal I complained about gave me my first Unsatisfactory Observation three days later, filed a fake police harassment report, I was removed from school and then, after 280 days, her office unsubstantiated the claims without calling in several key witnesses. I may call them when I am an administrator as then I could obviously do no wrong and will be protected. Isn’t that the MO of the DOE Protect the CEO’s of these small businesses we call public schools.

What was it that Martin Luther King Jr. said in his 1963 speech “I have a dream that my four little children will one day live in a nation where they will not be judged by the color of their skin but by the content of their character.”

Update: The DOE’s Office of Equal Opportunity contacted me about this. Let’s see if this gets whitewashed.

Just received this:
The case was unsubstantiated and the request for specifically minority male teachers was permissible. 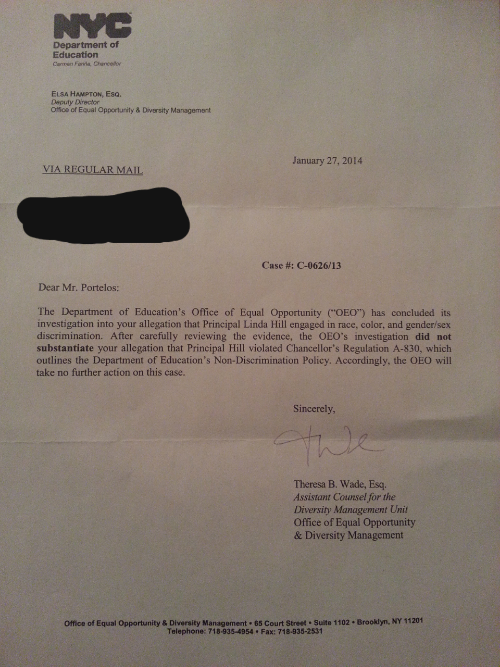