I know this site is called Protect Portelos, but I have to admit that I hate the name. I was naive when I created it and back in March 2012, I thought I was the only one under attack. Almost every night I get calls and emails from educators around the city and country who are under attack. The ones who aren’t have to wake up and realize that they are also targeted. Maybe it’s not in the form of a harassing administrator, but all this extra paperwork, testing, testing and paperwork is nothing more than a strategic obstacle. There is an attack on public education and who best to hit the hardest than the men and women on the front line…educators.

This site should be called www.Protect[Insert Your Name Here].com, but that would be a silly domain name. Instead I bought educatorfightsback.org and had it forward to protectportelos.org. I could fully change it, but that would cause a hole slew of issues with broken site links. I’m in the process of getting terminated so I don’t have that much time. In case you can’t remember thos domain names, you can also use www.RichardCandia.com. That one I bought in honor of my former UFT Chapter Leader Dr. Richard Candia. Not the guy who turned on me and his colleauges, but rather the guy I knew before that.

I rented out a hall and I am having a forum for all those educators who are feeling oppressed and want to defend themselves. I left the environmental field in 2007 thinking I was going into one of the most noble of professions. Education. The thought of having the responsibility of transferring knowledge from my brain to that of a younger generation filled me with fire. It still does. Don’t let anyone take that way from you. Don’t let them tread on you. You are not alone.

The time is now. I’m not waiting for 12.31.13 for when Mayor Bloomberg leaves office. The future is unknown and this issue is national, if not international (See teacher strikes in Greece and Mexico). A new mayor may or may not fix this modern day witch hunt.

This forum is way overdue. Please share and join us. I welcome additional endorsements. There will be no sign in sheet and you can attend anonymously. I will share what I learned from being in the trenches, but the conversation will not be one sided. Bring your cell phone as we will use www.polleverywhere.com for continuous feedback throughout the event. (No your number will not be traced. Relax.)

Facebook Event Page(Currently this Facebook version is by invite only so as not to publicize names of attendees. FB Message me at MrPortelos Portelos) 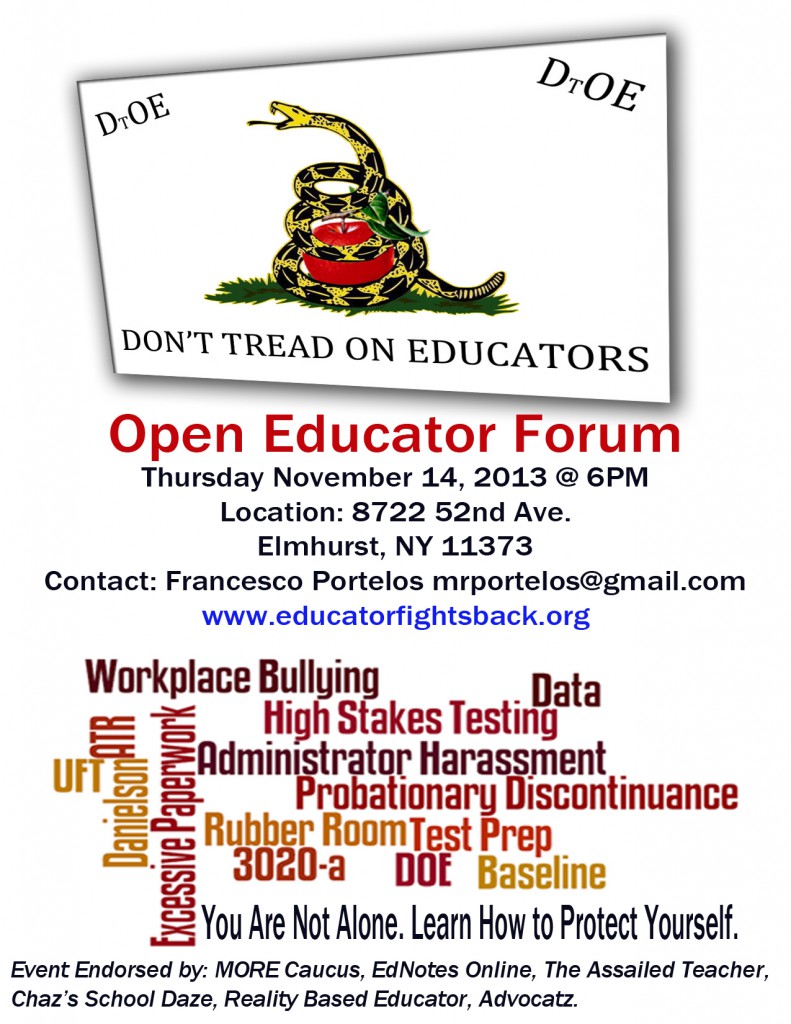 There is also an email support group started on Google Groups. Send a blank email message to Don’T Tread on Educatorsdtoe+subscribe@googlegroups.comto join.

PS: Principal Hill, Superintendent Claudio, lawyers et al, when I said “You Woke a Sleeping Giant” 21 months ago…this is what I meant.