Can You Guess How Many Allegations Were Made Against Portelos

Can you guess how many jelly beans in this jar 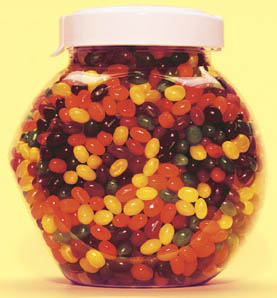 Better yet, could you guess how many different allegations were made about me after I raised concerns at my school (Answer below)

On April 26, 2012 I was removed from my position as an educator. This was after I tried resisting four months of attacks that began when I raised issues at NYC Public School Berta A. Dreyfus I.S. 49. I have not been permitted back to educate the inner city youth there ever since. Why I was informed that I was under investigation. NYC DOE Executive Director of Human Resources, Andrew Gordon, stated he and then Chief Deputy Counsel Courtenaye-Jackson Chase were the ones who decided to remove me based on some “very serious allegations“. I thought to myself “I know I didn’t do anything wrong, so there must be some seriously false allegations made“. I was sent to a basement 20 miles away to do nothing for months and was told nothing. The taxpayer continued to pay my salary and that of thesubstitute. Good thing there is a big surplus in funds for education.

I was not going to sit and rot at a desk (rubber Room) when I should be teaching. I told my union provided attorney that I want to speak to investigators about whatever they have. He was reluctant and advised me against it. “Anything you say can and will be used against you.” he warned. “I don’t care. I want everything on the table. No guessing games.” He was able to set up a meeting with investigators from the Special Commissioner ofInvestigation’soffice. Two professional gentleman met with me on June 14, 2012. We sat for over 2 hours at my attorneys office as they read out to me the long list of allegations. They read the first 3 that included some bogus real estate claims and a fake a text program I never heard of. I thought “No problem. That’s it” Then they proceeded to state there is an additional 15 or so more allegations. I then thought to myself “Oh boy. I know I didn’t do anything wrong, but can I dodge all these bullets”

It turns out I can. As they read through the dates and names of those making the allegations, my nervousness went away. By the time they finished, I thought “That’s it These are the serious allegations This is why the students were educationally neglected

Since that June 14, 2012 day, the allegations continued to mound and mound. It got to the point that investigators would visit me in exile and joke about it. “Surprise!…You’re the subject of a new investigation.” one stated and threw his hands up. “Well Mr. Portelos, this should be of no surprise, but you are the subject of another investigation.” another from OSI would say. It got to the point that I started wearing these frivolous allegations like a badge of honor. How scared were they of what I was uncovering that they were throwing anything and everything

Here are all the allegations against me that started with SCI Case 12-537. Keep in mind that these all started AFTER I had case 12-533 opened (notice the numbers). Case 12-533 was reported January 26, 2012 and isstill open (over 600 days). It alleged that Principal Hill was sitting and getting paid at the School Leadership Team, while also getting paid for OSYD’sAchieve Now Academy at the same time…double dipping

Allegations 1, 2 and 3 were all submitted on January 30, 2012 – Just 3business days after my first allegations of Principal Hill’s financial misconduct were reported (Jan 26) and UFT Chapter Leader, Richard Candia, walked out of a UFT meeting as I spoke and demanded I resign as UFT Delegate (Jan 27).

2. January 30, 2012-Principal Hill received an anonymous call that Mr. Portelos used an iTunes program called Fake a Message to email a student and make it appear that it was sent by the Principal.

4. February 22, 2012– Principal Hill alleges that Mr. Portelos requested that a paraprofessional work with him and other teachers on a Learning Technology Grant (LTG) after school to help his students. Principal Hill declined and Mr. Portelos apparently had him work anyway and submit time sheets.

5. March 2012 -Assistant Principal Joanne Aguirre discovered a website called protectportelos.org and it had student names mentioned. Parents did not complain.

6. March 2012-Principal Hill alleged that the website, protectportelos.org, had pictures of students. Parents did not complain.

7. March 2012-Principal Hill and Richard Candia made allegations that Mr. Portelos sent emails to the staff about his investigation.

8. March 2012-Principal Hill made allegation that there was an agreement to shut down Protectportelos.org and he did not.

9. March 28, 2012 -Rich Candia claimed that Mr. Portelos hacked into the website www.dreyfus49.com and copied personal email between him and Principal Hill and distributed it to the staff.

10. March 28, 2012 -Rich Candia alleges that Mr. Portelos walks back and forth in front of his classroom everyday and intimidates him. He was going to file a police report.

11. March 29, 2012 -Principal Hill alleges that she directed Mr. Portelos to shut down the website he owns and he did not. He also read, printed and distributed private emails from Rich Candia.

12. April 5, 2012 -Assistant Principal Joanne Aguirre alleged that Mr. Portelos asked the Parent Coordinator for pictures of a social gathering to possibly use to Photoshop Aguirre.

13. April 5,2012 – Assistant Principal Joanne Aguirre alleged that three emergency buttons in rooms around the school were blinking and that Mr. Portelos must be responsible.

15. April 2012 -Rich Candia emailed investigators that Mr. Portelos sent a secret code to Rich Candia’s phone and retrieved his text history and distributed it to the staff.

19. April 2012 -Rich Candia alleged that Mr. Portelos sent an email to the staff urging them not to share union matters.

After Mr. Portelos was removed from school:

20. May 2012 -Principal Hill alleges that Mr. Portelos emailed parents telling them that he posted lessons on his private website mrportelos.com

21. May 2012 -An unidentified teacher stated that they saw a message pop up on one of his classroom computers stating “Mr. Portelos’ class is fun“.

23. September 2012- Principal Hill alleged that Mr. Portelos remotely connected to his STEM lab and forced users to connect to his site www.mrportelos.com

24. September 2012– Teacher Jennifer Wolfson, Principal Hill and Richard Candia alleged that Mr. Portelos shared her teacher certification information with a parent in the community and it included her address and social security number.

26. November 29, 2012– Principal Hill asked that Mr. Portelos redirected the site he owns, dreyfus49.com, to another site he owns, protectportelos.org.

28. December 14, 2012– Superintendent Erminia Claudio alleged Mr. Portelos forwarded a video of an AP allegedly frisking a female student to community parents. A parent was going to put it on YouTube.

29. March 2013– Principal Hill alleged that Mr. Portelos informed students how to smuggle weapons into school on his blog.

31. April 2013– Principal Hill alleged that Mr. Portelos uploaded a video of a student on youtube without permission.

32. May2013– Principal Hill, Teacher Susanne Abramowitz and Teacher Richard Candia alleged that Mr. Portelos ordered several magazines to the school in the complainant’s name and then sent them the bill for it.

And there you have it. 32. All of which I believe, and can back up, are….unsubstantiated. SCI published a report about some of these that was extremely vague. So vague that even an AAA arbitrator could not make sense of it.

Here is a graphical representation of the allegations as compared to time I was in school and when I reported my first allegation.

Here is a small excerpt from the Federal Deposition of Principal Hill. My attorney Bryan Glass asked a question and the answer was great.

I copied all 32 allegations and pasted them into Wordle.net to make a Word Cloud. This is what popped out.

Parent and Educator fighting for the student and the teacher.
View all posts by Francesco Portelos →
Tagged  Andrew Gordon, erminia claudio.
Bookmark the permalink.