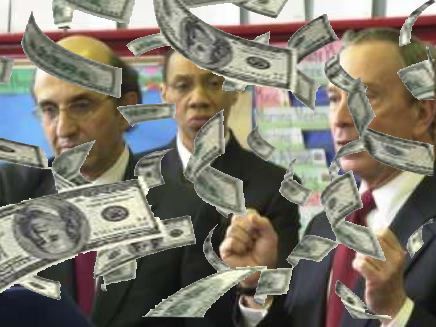 Bloomberg Klein made it rain money for investigations

Previous Parts
Part 1:The Special Commissioner of Investigations Hand is in the Pocket of the Chancellor
Part 2:A Tale of Two Videos
Part 3:Principal, Playboy and NY PostOh My!
Part 4:$ubpoena with a Capital $
Part 5:Faulty Investigations

When it came to investigating educators, the BloomKlein administration spared no expense. They literally made it rain money. Ok, not literally, as the word literally is literally the most misused word. Basically they spent a lot.

The Special Commissioner of Investigation’s Office pulled in over $5 Million dollars in salaries alone. Again, this is just salaries and does not include expenses like subpoenas, tolls, gas, paper etc. 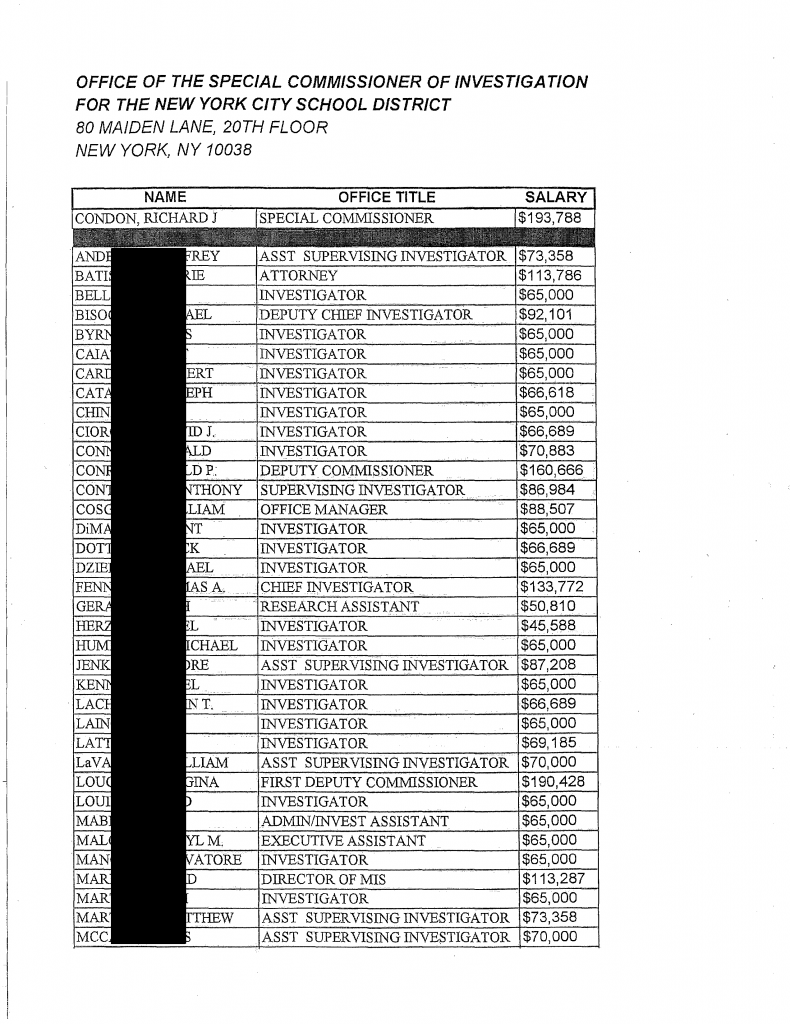 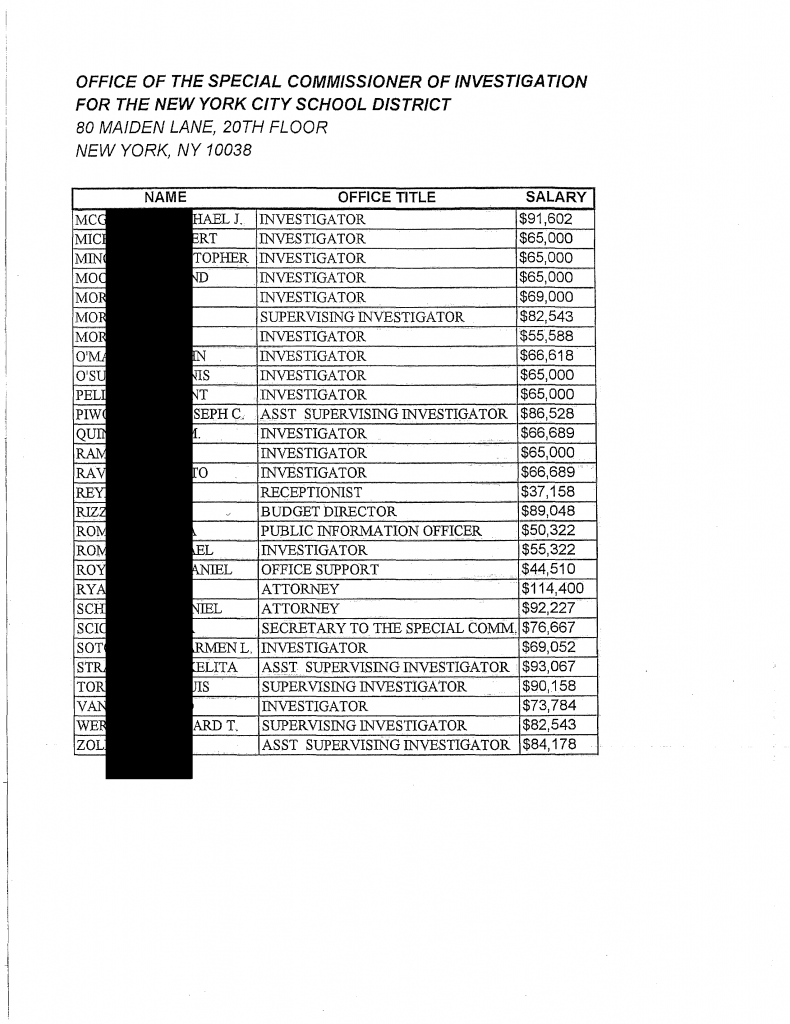 As I stated in Part 1 of this series, the salaries come out of the NYC DOE’s budget. At least we know it’s independent and unbiased investigating that is going on, right They do not owe anything to the DOE…except their salary of course.

My favorite salary in the list above is probably that of Richard Marin aka SCI’s Computer Forensic Specialist that pulls in $113,287 to be the “tech guy.”

On February 28, 2012, two SCI investigators came to my class to confiscate computers and then also came to my house. When I approached my house the investigators were out parked in the front. I waved and attempted to go up my front steps to get the iPad and Macbook they wanted. The passenger side window comes down and one investigatorsays something like “We heard you are tech savvy, so no funny business Portelos. We have tech guys too.” I went in and got the equipment and handed it to them about a minute later.

On June 14, 2012 I was interrogated for two hours by the same investigators. During the questions relating to technology I was again reminded that they “too have tech people.” No worries for me. I really didn’t care if they had Mark Zuckerberg working for them on the side.

On April 25, 2013 a very vague SCI Report on me and Berta Dreyfus IS 49 came out. In the 15 pages of vague findings there was mention of how the forensic investigator allegedlyfound real estate related files on my teacher desktop computer that is used by a dozen teachers. He found files that are not mine, so I became even more interested. I never knew who this tech guy/forensic guy was , so I picked up the phone and called SCI. “Hi. Good afternoon. May I speak with your forensic specialist please” (Like how I am so cordial It’s not an act.) “Yes, I’ll connect you to Richard Marin.” they said. I hung up as that was all I needed for right now. I web searched “SCI Investigator Richard Marin” and you could imagine my surprise when I saw one of the first search results involved a post about SCI allegedly manipulating files.

www.teacherabuse.com was the site and author teacher Boubakar Fofana wrote the following:

“CROSS-EXAMINING RICHARD MARIN, THE THUGGISH DIRECTOR OF INFORMATION SYSTEMS AT THE SCI THE TRUTH CAME OUT :
Here is the proofthat the SCI — DOE’s militia branch along with the OSI– broke into the server hosting this website. More specifically,Richard Marinbroke into a private server and copied an entire directory, MCHS, with subdirectories and files, and presented them as evidence to frame a teacher. As part of the discovery of the administrative trial, their “evidence” came in the form of a CD containing the files AND the picture of the index of the folder MCHS.That’s all I’m needed to expose these bloody liars.”

I do not know the specifics of that case mentioned above, but thought it was interesting that I suspected someone planted files and the first results that come up involve allegations of similar file manipulation.

More on Mr. Marin after my termination hearing is over, as I will not divulge certain information that has arisen during trial. You are not going to believe it. Actually, if you have been following this saga, you will have no problem believing it.

Who knows…maybe one day I will be SCI’s Director of MIS. Nahh…

Back to making it rain for investigations.

Above, I mentioned only SCI as this is SCI’s series, but in lieu of duplicating this post for the DOE’s Office of Special Investigation and Office of Equal Opportunity, let’s go ahead and see how much was also spent on salaries there as well. Remember that when an administrator wants a teacher out the Accuse and Remove method first starts with one or more of three investigative bodies. SCI, OSI and OEO.

SCI Salaries are $5 million (again not including expenses)

According to page 194 of released former Chancellor Cathie Black emails obtained we also find the following information on OSI and OEO,

The Total Spent on Investigating Educators is roughly:

$10 Million a year to investigate educators in NYC alone This does not include the $50 million in salaries to keep them in exile while investigated, nor the hearing process. Can we agree that it might be around $100 million a year in the end

“Mr. Portelos, why do you call it BloomKlein”

Well, we now have Mayor Bill de Blasio and Chancellor Carmen Faria. However, when the initiative to go after tenured teachers first began in 2007/2008, it was Mayor Bloomberg and Chancellor Klein that were in control. I do not know what changes the new administration has planned, but can only hope they make drastic changes that begin with repercussions for false allegations. Less allegations equals less investigations. Easy.

Monitor cases involve misconduct allegations made against DOE employees,
which originally were referred to another agency, such as the New York City Police
Department.

Sexual misconduct allegations include criminal acts, inappropriate relationships
with students who have reached the age of consent, physical and verbal harassment of a
sexual nature, and Social Media contact.

My take on the information above is the following:

Now I may not have all the information, or I may be missing something, but how did they open 791 investigations and actually completed 837 I mean how do you complete more than you open Unless they count the carry over from the year before (like mine).

If they get paid $5 million in salaries alone and we divide that by the number of investigations opened, doesn’t that give us about $6,321 per investigation on average. If that is true, again minus expenses, then the 30 investigations opened on me look like they cost about $190,000. Please comment on my math or your thoughts below. I may have forgotten to factor something in.

So this means that if I am out to at least April 26, 2014 (two years), the cost for my retaliation for blowing the whistle would be roughly:

Rough, rough, rough estimate is that my case may actually cost the taxpayer over $476,000.

Wow….and the irony is I am in this position because I questioned misappropriation of taxpayer funds on December 13, 2011.Friday the 13th Exactly Two Years Since I First Raised Issues at SLT