It was December 13, 2011. A group of adults had pushed several student’s desks together and sat around them in room 129 of Berta Dreyfus Intermediate School 49. The group was comprised of teachers and parents and they were there for only two reasons – 1) To set the goals of the school by writing the Comprehensive Education Plan (CEP) 2) To align the goals with the school’s budget. According to Chancellor’s Regs A-655, that was it. They were paid to meet after school, on a monthly basis, and do that job.

The problem was…they weren’t. It was December and since September, there were no discussions or review of the CEP or $7.7 million budget. So at one point, after SLT Chairperson Susanne Abramowitz finished her agenda items, I interject and raise my right hand, like a student, while my left was still on the iPad where I was typing the minutes below. “Hey, are we going to go over the CEP or the budget at all” I asked. What happened next was a bit unexpected to me, the newcomer on the team. The parents, UFT Chapter Leader Richard Candia and parent coordinator, all people who have been on the team for awhile, started voicing their opinions as well. It was almost as if there was a balloon that was inflating and inflating for some time, and I just popped it. “Yeah, why aren’t we looking at that Shouldn’t it be out on the table at every meeting” A parent to my left asked. A teacher on the team started discussing the budget and saying I think it’s online. I searched and found it and placed it in the meeting minutes below.

Members feel that we not only need to but have to take a more active role in the budget as well.

You can kind of see where I was hearing about Toy Drives, Senior Pictures, Senior Rings and then had enough and raised this concern. It’s basically stated right there in the minutes in order.

There was one person that was a unusually quiet. That was SLT Chairperson Susanne Abramowitz. She was hearing what was going on and knew this was on her. She is the chairperson after all and has the job of writing the agenda and running the meetings. “Well, we can ask Ms. Hill about it.” she throws in to the discussion.

Principal Hill was across the hall in her office. She was with the State Quality Review person that just evaluated the school earlier that day. Almost on Que, Principal Hill walks in a few minutes later. It was our holiday meeting and some of us had gotten up to grab some empanadas a parent brought in.

I remember I was by the window eating and facing the tables. Principal Hill was looking down at her food, eating, when Susanne Abramowitz nervously stated “We were discussing the CEP and budget and–” “CEP” Principal Hill interjected, still chewing, and not looking up. She waves one hand and says “That was due December 1st. I already submitted it.”

Well at that point you could cut the tension with a knife in there. I remember scanning the room and seeing the popped balloon, now deflated. I remember parent Jensen rolling her eyes. PTA President Peterkin also gave a look of disappointment. There was a general feeling of “We were close. We were close in doing the right thing.” The final kick came from SLT Chairperson Abramowitz who quickly, and with a sigh of relief, said “Oh ok…we’ll just work on next year’s now.”

I don’t think so. I had a 6 month old son, zoned for IS 49, living 1.5 miles away. I didn’t join the SLT and recently become UFT Delegate just for the title. I set out to make my community better for the students and my own son. I too shook my head and went to sit down and continued typing minutes. However, I open up the iPad’s browser and started searching for SLT and CEP. I came across James Calantjis’ website sltsupport.blogspot.com.

So I don’t repeat two years worth of unbelievable saga and retaliation, you can read what happened next here:http://educatorfightsback.org/the-story/

However, you should be interested to hear this that I have not share yet. As I continued to question the issue of the CEP and the violation to not only the chancellor’s regs, but NYS Ed Law 2590-h as well, the principal, SLT chairperson, and even former Superintendent Erminia Claudio stated “Oh …that CEP submitted on December 1st was just a draft. The SLT continued to work on it for the next few months. They signed and submitted it in April 2012.” That was the story they tried to play out to cover themselves. They continue with that false narrative to this very day.

It’s partially true. We did continue to work on it. If you read January, February and March’s SLT meeting minutes, there is discussion about editing and adding goals. However, that was just a waste of the parent’s time and to appease any one who questioned it. Susanne Abramowitz and Principal Hill literally had us sit for hours discussing items that were never, ever, going to be added. The reason they weren’t going to be added The final copy, written by Principal Hill and the Children First Network was submitted on December 1, 2011.

Don’t take my word for it. See here:

1. Go to the official NYC DOE website for IS 49.http://schools.nyc.gov/SchoolPortals/31/R049/Default.htm

2. Click on Statistics and Budget on the left side bar

5. Open it. Search for the key terms we allegedly wanted added during the February 7, 2012 meeting

CEP Review– We will add to the CEP the new programs at Dreyfus. They include:
49 Strong, Kids Connect, Love the Skin U R In (St. Johns students), Transitional
Coaches, Childrens Aid Society, and the Jewish Board (a bilingual program).

I’ll save you some time. Those programs are not in there. Why Maybe because the final version was submitted on…December 1, 2011.

Wait… there is more!

Since you have the file open. Click File and then Properties. Look at the date this official document was created and last modified. I’ll save you some time… 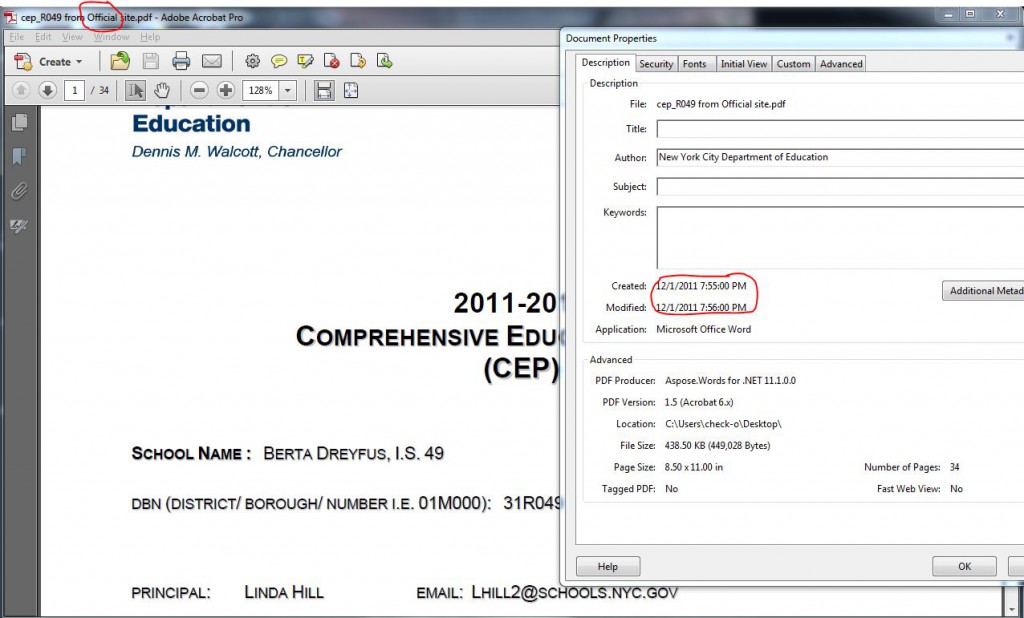 Pretty interesting, right For months we were given the impression that we were working on something and it was nothing, but a waste of time and cover up. Dirty and corrupt cover up.

Perhaps that is the reason they kept trying to shut me up when I wanted to add a fourth goal to the CEP. Can’t add anything. It’s already been submitted. They didn’t say that though. Instead Principal Hill barked at me “WHAT’S YOUR POINT MR. PORTELOS”

It actually gets worse…if you can believe that. Each CEP has a signature page and every member from the SLT has to sign to show they were involved. State Law. Sometime in late December 2011 or early January of 2012, I was on line to sign out and leave school at dismissal. I was next to another teacher and SLT member. Principal Hill stops us and asks “Can you two please sign this” It looked like the signature page (page 2 of CEP). “What is it” I asked skeptically. I noticed UFT Chapter Leader Richard Candia and Susanne Abramowitz already signed it. “It’s just a form to say we discussed something about a computer program.” she responded. Back then I trusted the two and we both signed as well and that was that.

But where is the official signature page I never signed one. I even FOILed it and simply requested just that page that is supposed to be readily available at the principal’s office. The response from the principal’s attorney, Marisol Vazquez esq., was “A diligent search has been conducted for the records youseek. I have been informed that no records have been located. As such, our response to yourFOIL request is concluded.”

I appealed that FOIL response to DOE’s General Counsel Courtenaye Jackson-Chase and her response was basically “We can’t provide what can’t be found.”

“But Mr. Portelos, did you reach out to the CEC, FACE or NYS to get assistance” Yes. It’s exactly two years later. Nothing from CEC President Sam Pirozollo. Nothing from our SLT liason Mike Riley. Nothing from FACE Director Jesse Mojica. Nothing from FACE’s Cluster 2 liaison Pedro Rivera. Who I would like to add sent this email out after I asked for help again.

Is this issue duplicated countless times across the DOE’s 1,800 schools Yes. Just ask any SLT member.I’ll leave you with that to think about.

I actually have to get ready for my termination hearing now. Today, Friday the 13th is my 13th day of hearings before an arbitrator. She will decide my fate, to an extent, in the upcoming months. My first three witnesses are set to come in today, with several more in the upcoming weeks. It’s open and public. Stop by if you can to see this saga unfold. My hearings alone have cost the taxpayer over $30,000 and that is just since September.

“Mr. Portelos, knowing what you know now, would you still ask that same question if you could go back in time”

Time since I last stepped foot in my classroom