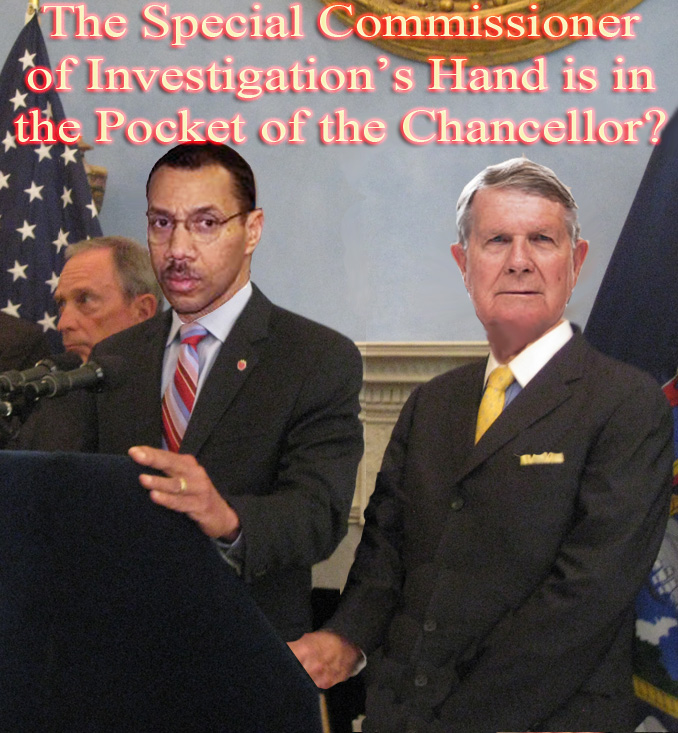 Part 1 of the EducatorFightsBack.org’s SCI Series

Relax…it’s a question, not a statement. Notice the “question mark” at the end Just a quick thank you to my public school teachers for teaching me proper punctuation and grammar. Any mistakes you see with commas and wrong use of capitals are mostly my lack of proofreading. Sorry, but I’m fighting for my career and trying to be a father and husband, so these posts are often written and posted quickly. Never written without thought though.

In any case, back to the question above.The Special Commissioner of Investigation’s Hand is in the Pocket of the ChancellorI’m simply asking who pays Special Commissioner of Investigation Richard Condon and the rest of the investigators and lawyers of SCI. Not a valid question I mean two of them, Mr. Martucci and Mr. Romano, paid a visit to my father-in-law this past summer at his job, while my family and I were in Greece. That is three months after the 14 month investigation on me was over (See report here).

More recently, the day before my 3020-a termination hearing was to start, the two investigators came back and visited my mother-in-law at her apartment where she watches my two boys. That was just two weeks ago today. To make it even more interesting, she told me they were playing with my son. Hmm….I mean I know I have been a big job security for the over 13 investigators, but I don’t think we are at the level where they can come “gaga googoo” with my kids. Apparently there are even more investigations on me and that brings the number up to a whopping 38 . Yes, 38 investigations on me that all started after I questioned the budget and put in my own complaint about my principal’s alleged financial misconduct. By the way, SCI did not take that case and referred it to the DOE’s Office of Special Investigation (OSI). Yes for over 600 days the DOE has been investigating the DOE.

This brings us to the meat and question of this post. Who investigates what and who is paying for it. You would agree that following the paper trail is important as “Cash is King”, correct

The DOE has two investigative bodies that are under the jurisdiction of Chancellor Dennis Walcott. That is OSI and OEO (Office of Equal Opportunity. Now OSI typically takes cases of corporal punishment of students and OEO handles discrimination and harassment. I italicized the word typically for a reason. SCI, who works under the NYC Department of Investigation (DOI), takes on “more serious” cases and can defer cases to OEO and OSI, so some cases not involving corporal punishment, harassment and discrimination can be investigated by OSI and OEO if referred.

Are you still following Maybe this will help:

Now seeing this and watching the news when Richard Condon is talking about some higher profile investigation, you would think that SCI is unbiased, a body wayabove the DOE and therefore impartial, right They owe no allegiance to the DOE, so why would any SCI investigation and finding be flawed or biased. A United Federation of Teachers (UFT) lawyer once told me “The DOE is scared of SCI and hates them, because SCI investigates them.” <cough>bullsh*t<cough>.

You see, while I was in educator exile I did a little investigating of my own and this is what I found:

By using the website www.seethroughny.net, you are able to put in any city employee and see their salary for the last few years. You can also see their overtime and per-session. What interested me the most is that you can actually also see where the money comes from. Let’s take a look and compare, shall we

Notice the Agency that pays him is the Department of Education

Next we enter an arbitrary DOE lawyer like David Brodsky

Now let’s pop in the Commissioner of the NYC Department of Investigation, which is above SCI and separate from DOE.

Ok, that makes sense. She is paid from the budget of the Department of Investigation.

Now Let’s just plug in Richard Condon in the search. Should be DOI as well, right

There must be some mistake. Let’s enter another SCI employee like Chief Investigator Thomas Fennell. By the way, I know way too many names of investigators for being a mild-mannered tech teacher. Mr. Fennell assigns cases and I believe also refers or even decides not to investigate them.

What Paid from the DOE as wellI did this for all the investigators I know and all the same. Even the lawyers who were involved in denying my whistleblower complaint.

Ok, well look what else I found when I looked at my own school’s budget and expenditures from 2010-2011. Looks like we paid about $6,637 to the Special Commissioner of Investigation. Unless I’m reading it wrong. Click Here for School budget link

I have been asked to respond to the e-mail request for information you made on May 15, 2013 at 12:58 p.m. to, it appears,www.nyc.gov.That inquiry was ultimately forwarded to me.You asked:

The answers to these questions can be found in the Executive Order which established SCI.This document can be found on SCIs website.

Section 5 requires that [t]he salary and expenses of the Deputy Commissioner and his or her staff shall be borne by the Board of Education, within a budget allocation mutually agreed upon by the Board of Education and the City, provided however, that such budgetary allocation will be sufficient to ensure the effective and independent performance of the duties and responsibilities of the Deputy Commissioner.

(Subsequently, Executive Order No. 34 of 1992 changed the title Deputy Commissioner to the Special Commissioner of Investigation.)

And there you have it.

Let’s just look at this analogy here. One SCI investigator once said to me “You are always using analogies. It’s probably because you are a teacher.”

Imagine you owned a house and you needed an inspector to check on some violations. You call Jim Bob Inspection and pay Jim Bob to come and investigate for any violations or issues. He investigates and you cut him a check. Once he leaves he sends you a report with his findings and on top of that calls the Department of Buildings who then fines you. Yes, you paid Jim Bob and yes he investigated, but in the end he found that you had violations. Not a likely story

Did you follow that analogy How impartial is impartial So is the commissioner’s hand in the pocket of the chancellor Not physically, but it appears Chief Financial Officer Michael Tragale cuts them a check.

Comments are welcomes below and please join us for more of the upcoming EducatorFightsBack.org’s SCI Series.

Stay tuned for the SCI Quiz…