SCI Part 4- $ubpoena with a Capital $ 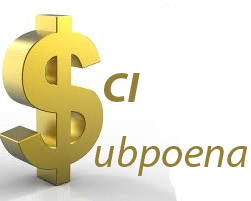 A subpoena duces tecum (or subpoena for production of evidence) is a court summons ordering the recipient to appear before the court and produce documents or other tangible evidence for use at a hearing or trial.

This is part four of an ongoing series I started on my own findings of the work of the Office of the Special Commissioner of Investigation SCI. Or as we’d like to refer to them as “The DOE’s Big Brother“. Remember back in school when sometimes a bully got some push back and then made the statement “I’m going to get my big brother after you” Here the bully is calling on SCI who appears to tweak their investigations to support “their little brother.” I and others have supported that allegation and we’ll continue to do so.

I know those who follow my story might have missed this part back in April 2013 when the report came out, but…

Let’s talk about it because it costs the taxpayer money, uses up manpower and it therefore affects the students too. Oh and perhaps it’s an invasion of privacy…perhaps.

Here is an excerpt from the SCI report from April 25, 2012. Pay attention to the highlighted area below.

So let me get this straight…a teacher, who had previously made mention that the staff lounge was being bugged by administration, was jokingly told by me that the room was under surveillance and that joke allowed SCI to $ubpoena my cell phone records Am I understanding that right They were able to see who called me and who I called and for how long we spoke Grandma and Uncle Vasili too My wife and sister Countless private calls Even my late night calls to the Chinese Food place down the block

$ubpoenas cost money, time and manpower to request and review. Someone, that you the taxpayer paid for, sat and sifted through a large number of my private calls only to find that I did not call at that time. The truth is I did call and I did joke and I did ask about UFT materials posted. Now I’m slated for termination for that. I’m not worried about that, but this abuse of $ubpoena does bother me. It should bother you too.

That wasn’t the only $ubpoena the Special Commissioner of Investigation’s office served though.

and who knows how much more…

“Google reported that United States law enforcement agencies requested data for 16,281 accounts from January to June of this year, and it complied in 90 percent of cases.“

I guess this ridiculous allegation didn’t fall under that 10%. I’ll chat with Google about that another time.You get the gist. When the directive to big brother came down “Get us Portelos!“, SCI spares no expense.

It didn’t end there with those $ubpoenas. As I was being interviewed by SCI Investigators Michael Romano and Richard Werdann for two new cases on October 22, 2013, I saw an interesting piece of paper in their thick folder on me.

It was upside down since I was sitting across from the investigator. This is what it looked like:

I thought that was interesting. Especially since it was American Airlines that my family and I took to go to Greece this summer. They $ubpoenaed my vacation itinerary Yes, it appears so and youpaid for that too. Perhaps we can ask SCI’s Budget Director Phillip Rizzo how much has been spent on my case or just on subpoenas.

Where is Edward Snowden when I need him There is much more as far as surveillance is concerned, but just sharing this for now.

Parent and Educator fighting for the student and the teacher.
View all posts by Francesco Portelos →
Tagged  Richard Condon, sci, special commissioner of investigation.
Bookmark the permalink.