I’m proud and happy to share a post sent to me by a great friend and teacher advocate…DOEnuts:

remember you can join our DTOE mail support group by emailing a blank email to dtoe+subscribe@googlegroups.com

Without further a due…..

A friend at a party during the Bloomberg years:

Friend Hey Chuck, its nice to meet you

Stranger: Thanks. Sooooooo, youre a teacher

Friend: Yeah, man. Its a great job. Been at it for ten years now. What do you do

Stranger: Im a lawyer with DOE legal. I fire teachers for a living

Friend: <after a brief pause> Sh** man. Thats what you do for a living How do you like it

Some people dont care about these exchanges. Others will pretend to care about them only when it serves their purpose. As a teacher -one who has lived through the Bloomberg days and has been a direct victim of his attacks from his minions- I care about them. Thats why Im proud to be able to say that I will be joining with Francesco Portelos Dont Tread on Education effort. One of the things Francesco is seeking to do is to defend teachers who have been attacked by ruthless administrators by educating them about the tactics that are being used to destroy teachers careers. This is an altogether worthy endeavor and I look forward to putting my best effort into it.

Its also a very noble effort! It is a very noble thing to devote large chunks of your personal life so that others may benefit. This is especially true if youre like Francesco and have experienced the true attacks the department can launch on your livelihood. Answering those attacks in such a way that the next guy doesnt have to experience them is probably the most high minded thing that a person can do and Francesco is a hero to me (and many of us) for leading the way.

My own resume toward stopping the attacks on good teachers isnt entirely empty. I have, in the past, written in defense of Francesco as well as another dear friend whos life was turned upside down by the vicious attacks of Bloombergs employees. I have found proof that perhaps as many as 12,000 teachers have faced this process since just 2008 alone and I once spent months researching the use of state funds and uncovered as much as $37 million being spent just on the salaries of arbitrators who hear and decide the cases the DOE make as it asks to fire teachers. Ive written and researched court cases, went and watched oral arguments and have pleaded with colleagues (some at MORE) to reassess their opinions of teachers who had been accused -all in the hopes of supporting teachers who were attacked. I dont think Ive done nearly enough toward this effort. Certainly not as much as true, dedicated heroes like Norm Scott, Betsy Combier (oh and here), James Eterno as well as heros who blog under monikers like, NYCEducator Assailedteacher, Perdido Street School , AccountableTalk, Raginghorse, Chaz School Daze, SouthBronxSchool and Francesco Portelos have done. Theyve done more and in a more thorough and thoughtful way- for a longer period time than an ant like me ever could. Im a spec on the battlefield of defending teachers. But Im an honest, forthright spec who knows he can no longer be sit back and watch a department try to fire teachers for things like:

Posting one thoughtless comment on Facebook after work (from a lady who is a wonderful teacher and whom Im proud to call my friend today).

Bluffing: making students feel that their antics in the boys room was being filmed in an effort to get them to stop putting toilet paper in the bathroom

Calling himself an asshole in public

Telling a student he was so proud of her test score he could kiss her (in a public class, with clear intent of showing pride for the good work she had done).

These arent made up stories, folks! These are true stories from the Bloomberg years. Career teachers beloved by the colleagues and their students- have faced firings for these precise actions. If there is a practice in the Department of Education that must end, the enfettered harassment of teachers by cold and callous lawyer-driven system is one of them and I am very blessed to have been asked to be a part of it.

My intent is to devote every non-working, non-parenting, waking hour to Francescos effort to educate teachers and help them defend themselves. I will be skipping my second Masters Degree program for this effort (I cant study for my 30 above and spend real efforts defending teachers and if I have to choose one I choose to help protect teachers), but Im cool with it.

Just one thing: If Im going to dedicate a large part of my adult life to this effort, I want to make sure that the teachers who I work to defend are really decent people and real teachers. We have a hard truth to face before we get started and its one that Ive never publicly faced before: There are bad teachers in this system. There are, sad to say, some teachers I wont be able to bring myself to defend. I wont, for instance, defend the teacher who snuck Heroin into a courthouse. I know he got his job back and I hope he does well in the classroom. But Im old fashioned and I dont think drug users who carry their drugs into public buildings, are good role models. And then there is the obvious stuff like inappropriateness with staff or students, stealing, threatening or hurting anyone. I cant defend that. But there are also a few things I wont stand to defend either. Therefore, I would like to submit the following list of standards that teachers need to reach in order to earn my defense of them. I can -and will- work to defend you, as long as you dont do any of the following things:

or any host of other things I didnt think so. Earn your check, man!

Finally, I cant help you out if youre a bully. I hate bullies. Hey man, everyone wants that special parking spot or that premo classroom. Bullying your way into getting it isnt going to help me to help you. DOENuts doesnt help bullies who have been bullied.

So, in short, if youre there for kids and there for your colleagues, and a half way ok human being, I will not rest until you have been defended by the new group I work for.

But if you are one of these people who could care less about anyone in the world but yourself;. If you use people. If you lie to people. And if you hurt the ones around you, I wont stand by you. I may even put the blade in your chest myself.

I digress!! I have a message for the folks who wake up early every day, work hard on behalf of students and have been marked for an Accuse and Remove by the department, Its a message that speaks loud and clear and does not mince words: You are not alone! Francesco Portelos is one his way (and hes got a blogger from the Apocalypse riding shotgun!) 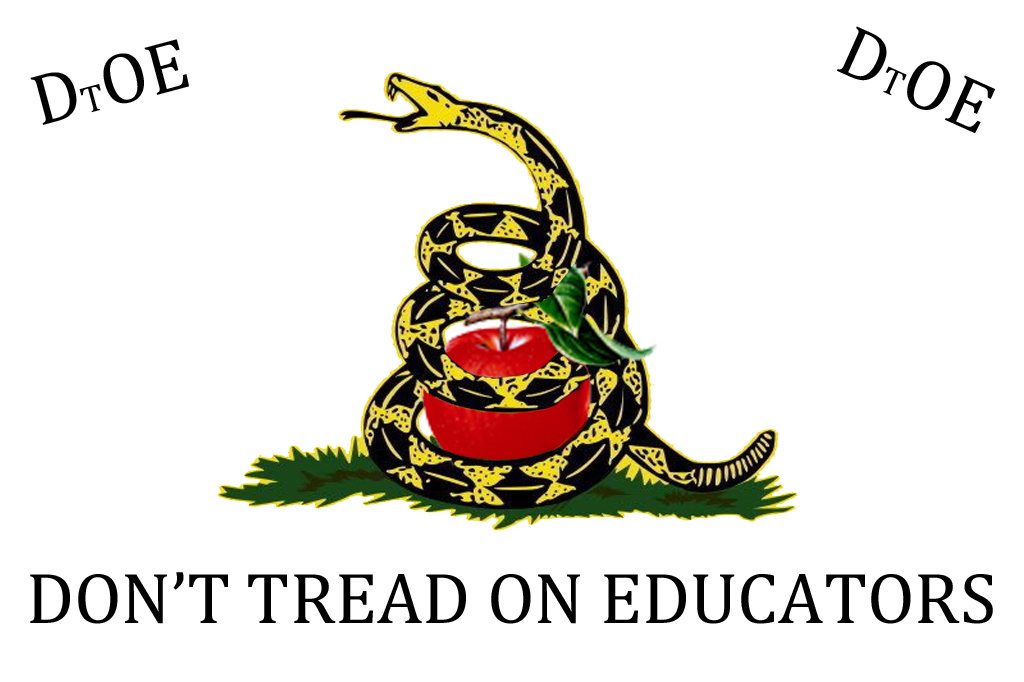