WWYD – What Would YOU Do

Wrapping up What Would — Do Week with what would you do

What Would Dennis Walcott Do

What Would David Weiner Do

What Would Michael Mulgrew Do

What Would Karen Lewis Do 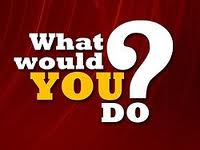 What would you do I know you have seen things that are not right. I know it’s easier to look away and not say something. Trust me, I too was guilty of looking the other way and not always raising concerns earlier. I would toss and turn in bed at night hating myself for not doing more. Why does the late bell ring and the students are still walking the halls Oh of course it is our fault for two reasons; 1. Our lessons are not engaging enough and 2. We are not monitoring the hallways. I didn’t know we were supposed to clone ourselves and be in the class teaching and at the door convincing students to get to class. I brought this up to my principal and attempted to defend my colleagues before I was union chapter leader. The administration continued to undermine us and send those students onto fun bowling and roller skating trips and even change their grades. Our power and control had slipped through our fingers andno one was saying anything. What would you doif a student said he had a gun, then ran out of class, then broke a window and he was sent on a roller skating trip the next dayWhat would you do if the principal defended the decision and stated “The student earned it”

What would you do if you heard that the principal was sitting in on one meeting, getting paid a stipend and then was alsosimultaneouslypaid for another program Would you keep quiet What would you doif you were sitting on a School Leadership Team that was supposed to create goals and align it with the $7 million budget and nothing was done

What would you do if an assistant principal clocked in to a program at the end of the day and then you saw her leave the building and find her time card clocked out two hours later Good for her She just allegedly made $80 for not servicing the ELL students after school Would you call it inWhat would you do if you saw the same assistant principal be tooaggressivewith the students and and pull them into her chest and grab them by the throat and feed them lunch with her fork and frisk them publicly in the hallway Would you just look the other way What if you had enough and you video recorded an incident since your colleagues stated calls about this behavior have been made before andnothing happens Who would you send it to SCI OSI FBI OEO USDOE NYSED UFT CFN How many acronyms can possibly ignore the students The answer…one too many. What if you if you sent the video to local parents and they couldn’t believe it and uploaded it on youtube Would that be wrongWhat would you doif a dozen staff members were ready to talk only after the threat of retaliation was liftedWould you share the video and ask “Why are veteran teachers with stellar records terminated forhere-say allegations, but an administrator who breaks chancellors regs on frisking is not removed for even one day”

What would you do if your union, who is supposed to protect you, has been bought and is working against you and your tens of thousands ofcolleagues Would you just stop Would you take over that union What would you doif same union leadership agreed to evaluations that would negatively effect countless present and future educators Would you vote that leadership in again for another three years

If the answer is nothing, the next question is “For how long” Indefinitely What would be thestraw that breaks the camels back

I love teaching… I hate corruption. Can you see the dilemma I have working in this system

If you are reading this site, then you know what I would do. What will you do…tomorrow, next week, next month