WWMMD What Would Michael Mulgrew Do

Continuing with “What would — Do Week, we bring up UFT President and former chapter Leader of Grady HS, Michael Mulgrew. What if in a parallel universe he was sent to the Rubber Room while a Chapter Leader at Grady HS See below how is current bio might be different. Would he be upset with Randi Weingarten if she left him to languish there 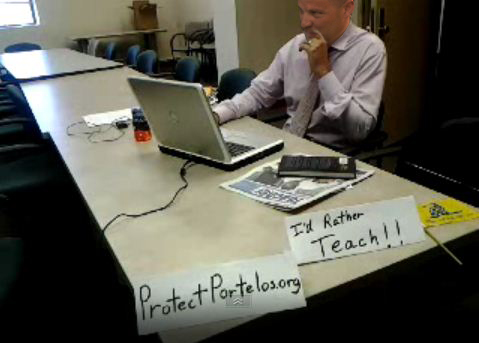 If Michael was sent to the Rubber Room

Read bio below. I added my own alternate universe scenario in red

Michael Mulgrewbecame the fifth president of the United Federation of Teachers (UFT) in August 2009 and was elected to a full term by the UFT membership in April 2010.

As UFT president, Michael has advanced the unions commitment to transforming education in New York City and to elevating the role of parents and the community in governing our schools. Building strong alliances and creating opportunities for collaboration with parent, civic and community groups, has become a hallmark of Michaels presidency. A staunch advocate for equality in education and fairness for all working families, Michael led advocacy campaigns for educational equity, for transparency and oversight in school governance as well as for jobs and city services. He was instrumental in organizing the Keep the Promises, One New York: Fighting for Fairness and A Strong Economy for All coalitions between 2008 and 2011 that led to the restoration of hundreds of millions of classroom dollars and city services. His persuasive negotiation skills have helped avert teacher layoffs and bolster resources targeted to struggling schools.

In 2010, Michael reached a landmark agreement with the Department of Education to close the Teacher Reassignment Centers (rubber rooms) (WHICH IS WHERE I AM WRITING THIS POST FROM IN 2013. 329 DAYS OUT OF SCHOOL AND NO CHARGES)and led lawsuits with parents and community education advocates against the DOE for failing to reduce class size and for wrongfully closing 19 schools.

Affirming that educators need to find new ways to validate what they know to be true about the complexities of teaching and learning and to bring their voice to the reform debate, Michael negotiated a new teacher evaluation agreement with the New York State Education Department and the New York State United Teachers (NYSUT) that includes multiple evaluation measures and provides teachers with opportunities and supports to improve their skills. Michael was a chief proponent of combining the skills and resources of the UFT with the Teachers Center to proactively train hundreds of teachers in the Common Core State Standards well in advance of the DOEs system-wide introduction.

In addition to his UFT responsibilities, Michael is a vice president of the American Federation of Teachers (AFT) and an executive board member of the New York State United Teachers (NYSUT). Michael also sits on the boards of the Council for Unity, CUNYs Joseph S. Murphy Center for Labor, Community, & Policy Studies, and New Visions for Public Schools. He has received numerous labor, education and public service honors including the 2011 NAACP Benjamin L. Hooks Keeper of the Flame award.

Before being elected President of the UFT, he served as vice president for Career & Technical Education (CTE) high schools and later chief operating officer of the union, which represents 200,000 teachers, guidance counselors, paraprofessionals and other personnel in New York Citys public schools, along with nurses and home day care providers.

Mulgrew began his teaching career working as asubstitute teacherat South Richmond High School IS/PS 25 on Staten Island, a District 75 school. He became a full-time teacher at William E. Grady Career and Technical Education High School, avocational schoolinBrooklyn, New Yorkin 1993. He held his first UFT office, aschapter leaderat the high school in 1999, and his hard work helped win the Grady High School UFT chapter a Trachtenberg Award for its strength and unity in 2002. Unfortunately, his hard work also led him to question Grady’s administration’s misuse of funds and lack of discipline. He was attacked by the administration and was banished to the notorious NYC Rubber Rooms he would later close down in 2010. There he sat for over a year. Feeling forsaken by the UFT and wondering why the union wasn’t strong enough to help him, especially since he was never charged with misconduct and a chapter leader.

A Staten Island native, Michael attended CUNYs College of Staten Island and has degrees in English literature and special education.