Who is Leaving @NYCSchools Next TAG You’re It.

She is my principal’s attorney and has been advising her from day one. Great job Marisol!

He is the Director of Labor Relations and he too has done a poor job of making decisions in my case from grievance decisions to preventing me from representing my members as a chapter leader.

Tagging in blog posts is a great thing and it’s something I didn’t start doing until recently. Now I have gone back to tag people in old posts. That way one can click the Word Cloud to the right of my posts and see all posts that relate to that person.

If you told me in early March of 2012, that I would still be adding content to www.protectportelos.org, I would respond “You’re crazy! This is just to show my recent letters of discipline to compare to years of praise and thanks. Little did any of us know it would get to this. By “any of us” I mean from my friends, family, colleagues, administration, the lawyers that were advising them wrong and many others. Who would have thought

Here we are in November of 2013 and the small little site that just had my letters of recommendation to compare to disciplinary letters, along with a brief story has expanded. It wasn’t even a blog at first. It was one long page that I kept adding to. One friend Facebook messaged me a month later stating “Your blog looks like crap! Fix it.” So I did.

On the administrator side of my site, I can take a look at what keywords people search to get to my site. I can see IP addresses and sometime the institution that visits. The US Department of Defense was recently visiting my site. Not sure who or why. The NY State Senate and NYC Council as well. Fans or foes

For example I saw that the NYS Education Department was visiting the same post about Case 12-533 that was open for over 600 days. They visited many times in the last three weeks. Now that case is closed and we await the results. Coincidence

I also saw many searches on “Andrew Gordon” the former Executive Director of Human Resources of the DOE in December 2012 and January 2013. Some searches were from New York University. Next thing I heard was that he left to be the VP of HR at NYU. See here:http://www.nyu.edu/about/leadership-university-administration/office-of-the-president/office-of-the-executivevicepresident/office-of-operations/human-resources.html

This brings us to a possible pattern that the more an employee is searched, the more of a chance that future potential employers are researching them. Isn’t what we tell students “Watch what you put on the internet, as your future bosses will see it.” Unfortunately for them, their future colleagues, employees or employers see these posts.

“Mr. Portelos, now as the de Blasio administration starts to move in, have you seen some recent activity”

Well I am glad you asked. Here is who has been popping up a lot and I believe will be leaving soon or is at least applying.

“Courtenaye Jackson-Chase“- She is the top attorney at the DOE and is thought of by many as telling the chancellor what to do. There have been at least 20 attempts to search her that landed web surfers to this site.

This one is from today: 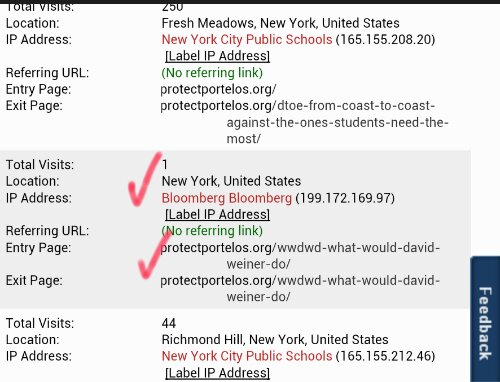 “Deputy Chancellor Kathleen Grimm” came into play in my blog only recently. Her involvement in my case spans a year though. In any case she is mentioned in my blog in regards to an asbestos issue and people out there have really been searching her name recently. I wonder where she will go. Hopefully not School Construction Authority as she is not good at assessing asbestos hazard situations.

“OSI Investigator Lawrence Scott” was also recently trending and he too just left the DOE. He was lead investigator in the 600+ day investigation into my principal. That case again is closed. Maybe he didn’t want to be around when case was published.

It’s interesting that not only are these people searched and lead to this blog, but I am usually in the top three hits.

Some other search terms that land visitors to this small insignificant site are:

How to Write a Teacher Rebuttal Letter

How To Fight Anonymous Charges Against an Innocent Teacher

I am outnumbered, out-lawyered and out-budgeted, but TAG you are it. Actually, is this a game of tag or manhunt