This morning I attempted to have another United Federation of Teachers meeting with the members that weathered the traffic conditions and made it in early at my school. Remember that for the entire time I have been UFT Chapter Leader, I have been in exile and therefore not allowed to enter the building. No one…not one DOE employee has been able to give a viable excuse or reason for this. Instead they coward behind Blackberrys and reference false policy. See “Who is Donald Conyers”

Neither the April 15, 2010 UFT/DOE agreement or the newly acquired HR Supplemental Reassignment Policy reference prevention of returning to building for non-teaching duties.

The staff at IS 49 has faced its share of abuse of rights. When we have obstacles, we try and work around them until we hit another obstacle. In the fall of 2012, my first semester as chapter leader, I had some meetings out on the curb with coffee and donuts out of my trunk. Then it became colder and we attempted to have Skype video calls where the staff of 30-60 could be in one room and I would be up front via a projector and webcam broadcasting from exile. At first Principal Hill told the UFT delegate that she was not to use any DOE equipment or the wireless to have me connected. Union Busting <cough>

No problem…we roll with the punches and I instead had a member call me and put me on speakerphone. We had a bunch of meetings via speakerphone. After all, it was not as important that the staff sees me as it was to hear me and ask me questions. On one occasion, as we were conversing via speakerphone, Principal Hill decided to make an announcement to English Teachers. The issue was that school had not even officially started yet. We meet on Friday mornings before the students come in. I guess that announcement via the PA system was very important. <cough> Union Busting <cough>

After time we started setting up the projector and I was up on the screen in front of the members holding meetings. In addition, I email the staff frequently and set up the chapter website www.is49uft.orgIt wasn’t the ideal situation for a staff demoralized, but we did the best we could.

In the last month I filed four chapter initiated grievances with Principal Hill. She answered none of them. We took that as a denial and we wait for the UFT to take them to Step 2. Some were safety and others contractual violations. Keep in mind we have been on the NY State Persistently Dangerous List two years in a row now.

Going back to today’s meeting, my consultation committee set up the webcam again and as we waited for speakers, Principal Hill walks in. Now remember that the administration are members of another union; the Council of School Supervisors & Administrators (CSA). She apparently came in and said she needs the room, that we always use, to set up for her own meeting. My meeting was going to end around 8:15am and her meeting was to start at 8:15am…all in the same room and the same people.<cough>Union Busting<cough>

The reason we were to meet was to discuss safety concerns and this new DOORS program I had developed. That’s of course in addition to other issues the staff had. The reason Principal Hill didn’t let that meeting take places was…. 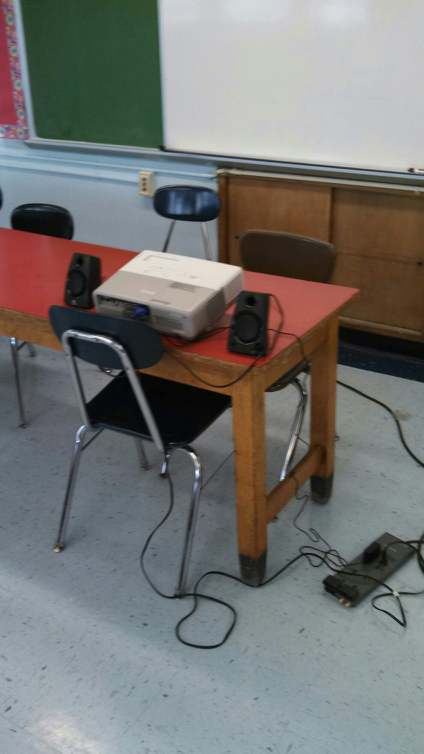 Safety is and always has been a big concern of mine. I just found out that I am invited for a meeting at NYC DOE Headquarters (Tweed) to discuss safety in March. Hopefully we can accomplish something and ensure IS 49 is a safe place to learn.

This email below came after the veryVague SCI Report is Finally Out on Portelos and IS 49came outand I was mentioned in the media on April 25, 2013. 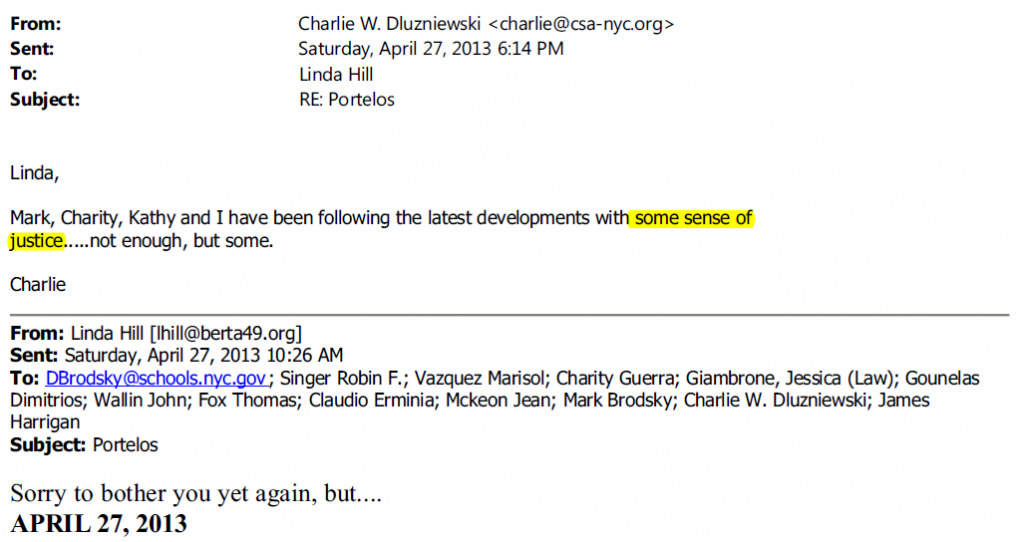 Some sense of justice Charlie Oh, butnot enough justice I hope for two things Charlie… 1) That you, Kathleen Murphy, Mark Brodsky and Charity Guerra continue to follow the developments and 2) that all of you and I can laugh about this when I am Principal Portelos (principalportelos.org) and part of the CSA one day.