Continued from Admin’s “Not so Confidential” Emailssegment.

On or about January 30, 2012 the call was made to start a paper trail on me and have me terminated. My spotless record was tainted with the first three of almost thirty investigations started on me and the first two of three disciplinary letters on January 30, 2012. I searched my name in more of Principal Hill’s emails and found this one. Now I am also sharing her emails with her city attorney as part of the Federal lawsuit discovery. I don’t think they can really pick up on things like this below. Here is how I found that my principal was psychic and writing up disciplinary notices for before I allegedly committed the act. Pay close attention as this is a little tricky.

After my first two bogus disciplinary letters, they needed more. I’m going to follow the timeline.

On Thursday February 9, 2012, just over a week after the attacks heated up, I stayed after school for the Beacon program. It ends at 5PM. My lessons for my STEM class were 100% online (www.mrportelos.com) so the students can listen and learn at their own pace. I was originally praised for this method and more recently attacked for it. I needed peace and quiet to create these screen recordings and no interruptions. Something that was just not really possible during the day. Like I did 99% of the other days of the school year I stayed late to create a new Video Editing lesson. Even though they are 8-15 minutes long I often need 30 minutes to an hour to record, edit and upload each.

It was about 5:30 when I thought to create a second one and get ahead as things were getting crazy at school and I didn’t know what each day will bring. I knew I didn’t want my classes to be affected by the attacks I was facing.

I finished up and thought I will run home to my wife and son and upload the finished video first thing in the morning. As I left around 5:50PM I stopped to check my mailbox and saw the principal’s office light was on. I literally dropped everything and thought “Let me go in there, speak to her alone and have a heart to heart from professional to professional.” Umm…it didn’t quite happen like that.

I walked to the closed door and tapped on the window. Her desk faces the door. She took her eyes off the computer, looked at me and yelled “NOO!!” and pointed her finger out for me to go away. I didn’t say a word and left like lightning. As I exited the building, I remember flipping through the good times in my head. Like when I video conferenced my friend, a US Marine stationed in Afghanistan, onto a projector in front of my class of over aged 8th graders. A teacher told me later that Principal Hill came into his class and said “Go see what Mr. Portelos is doing. It’s amazing. He has an actual marinespeakinglive from Afghanistan to class 832!“. Those days were over…

Little did I know that me staying late was going to turn into my 3rd disciplinary letter in ten days and 18 months later would be used in a termination attempt by the DOE.

Again that was February 9, 2012. About a half hour later I sent this email to my UFT Borough Rep.

The next day, the payroll secretary hands me an envelope with a signed version of this letter in it. 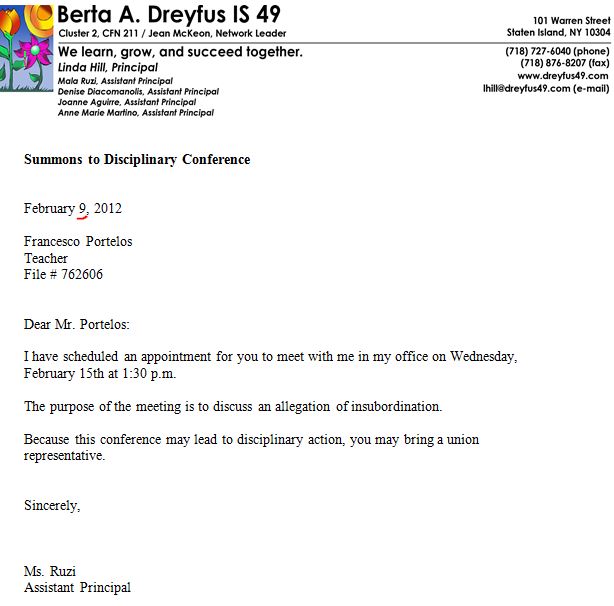 “Who is Ms. Ruzi” you ask. She is the assistant principal who Principal Hill picked to investigate this egregious case of “insubordination”. I know, you have barely seen her name on my blog.

However Assistant Principal Mala Ruzi did not write this letter. Principal Hill did and sent it to her as the one who charges the disciplinary action should not also investigate. She had to pass it over. For other teachers keep in mind that one administrator should not be Judge, Jury and Executioner. 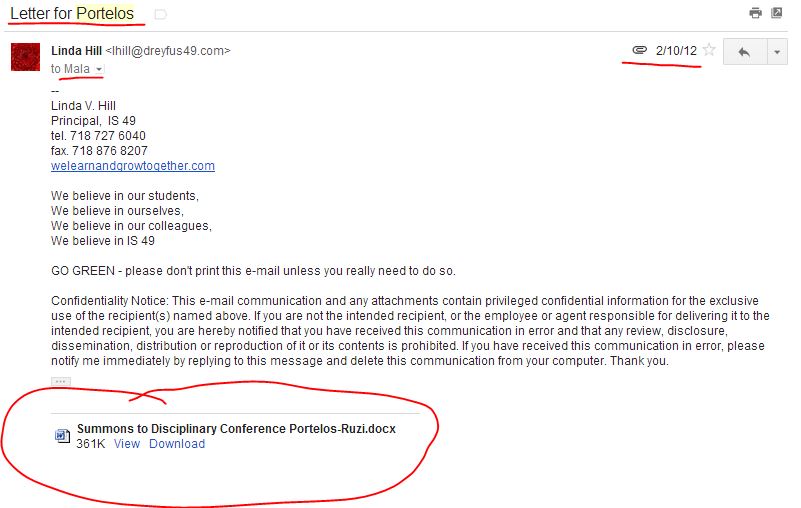 Now keep in mind that I did not know what this was about until I met with Superintendent Erminia Claudio and Principal Linda Hill on February 14, 2013 (Valentines Day). Notice the date on the letter was February 9, 2012…the day I left late. So did I leave the school that night and Principal Hill got right to getting this letter written Remember she had no idea why I was there or what I wanted. It could have been an emergency. I wish I had the transcript of the federal deposition where she was questioned about this.

My lawyer, Bryan Glass, esq., asked her something like “You wrote him up with a disciplinary letter without even knowing or asking why he was there”

Hill: “Yes. He defied my directive of notifying me if he was going to stay after 5:30”

Bryan Glass: “What about just a counseling memo Why a more severe disciplinary letter”

Hill: “No he had to be disciplined. He defied my directives.”

FUN FACT: Another employee was found to have called in sick and gone to the Giant’s Superbowl Ticker-tape Parade around the same time. No letter in their file.” I stayed late to work on a lesson and am now being terminated. LOL.

“WAIT…MR. PORTELOS…YOUR TITLE TO THIS POST STATES “PSYCHIC“. WHAT’S THAT ABOUT”

I downloaded the file, circled in red above, that was written on the 9th by Principal Hill and sent to Ms. Ruzi on the 10th.

I saved it on to my computer and clicked on the detailed properties of the file to see if there was any interesting info about the author or something. I know…I’m sly like that.

Well look at what date and time that summons for insubordination was written and by who: 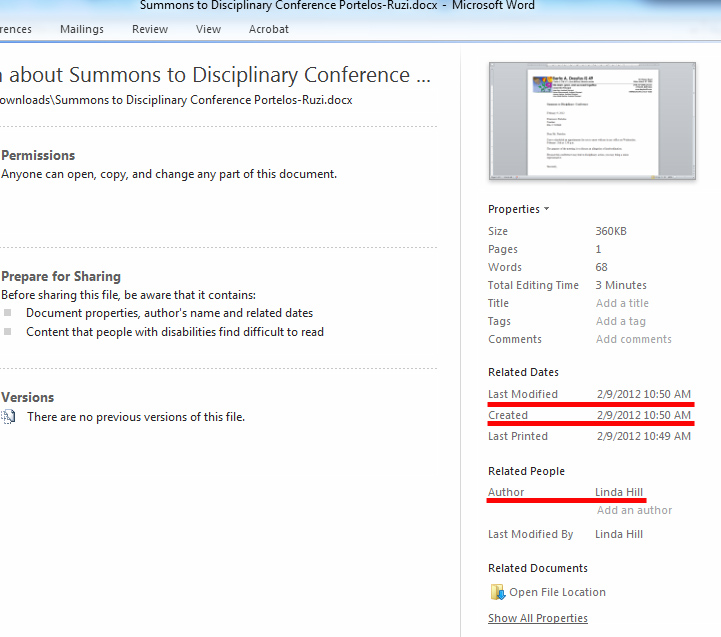 It would appear that this document was created around 10:50AM with my name on it and it was to discuss an act of insubordination that I had yet to allegedly commit at 5:57PM later that day. What

Principal Hill’s Psychic Eye or was this letter originally written for something else less egregious Or maybe she knew I was going to stay late as I have done for the last four years. So late that she commended me for it just three months before in a Letter of Recommendation. In any case it establishes some bizarre behavior and should be of public concern as this is the education leader of a school of about 870 students.

“Mr. Portelos, did you think the time stamp on the file was off due to Daylight Savings or something”

Perhaps, but times on computers these days are usually linked to synchronized sites and time zones. Besides DST would only throw it off for about an hour. I could tell you more, but I’d rather they come up with things on their end.

What else that I find interesting is the follow up email that talk about a lawyer. 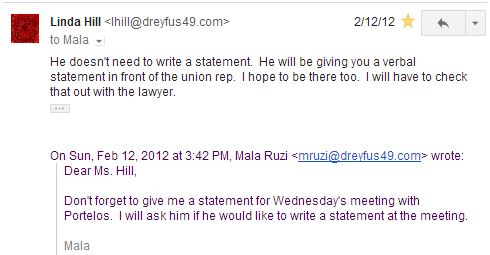 Lawyer So early in the stage Which lawyer was directing her and what kind of direction was she pointing Principal Linda Hill in Obviously we know that it was the wrong direction. More about that lawyer coming up in the next emails. We can assume it was a lawyer from my post Teachers Meet DOE Legal.

“But Mr. Portelos. The SCI report stated that you might have stayed late and ran a real estate business. How do we know you didn’t stay late, violating her directive, for personal gain”

Excellent question. Like I said above, I worked on creating a video for my class and then uploaded it the next day to my vimeo.com account. See screenshot below of video of How to Create a Movie About You. That’s my son Alexander by the way shown below. Placing the mouse over the 1 Year Ago mark tells you when it was uploaded. It finished processing at 8:30 AM. 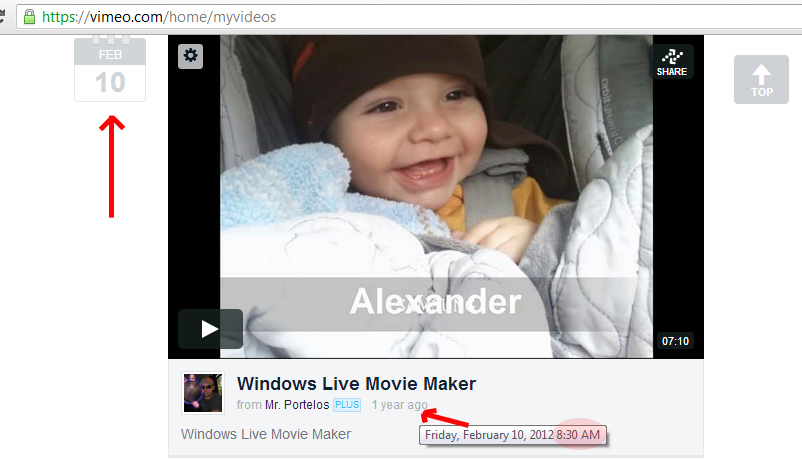 “What a tangled web we weave, once we first practice to deceive”

Sneak Peaks of upcoming “not so confidential” emails.

Set ups and lack of support of other teachers.