On my 390th day of Educator Exile, Friday May 17, 2013, I was handed a packet of papers. These papers indicated that the NYC Department of Education was going to start the new chapter of this saga and attempt to terminate me using NYS Ed Law 3020-a. Now I know and they know that isn’t really what is happening. You do not need a law degree to read through the 38 charges below and ask “Wait, this warrants termination” “This guy who took a $20,000+ cut in salary and left the environmental field to teach inner city children and should be fired” This is a delay game. This is a “Keep Francesco Portelos out of IS 49 and District 31 as long as possible, because he is good at finding out information.” tactic. For how long Who knows Maybe until Principal Hill’s investigation is complete. Maybe until she retires or maybe until this whole group is replaced by a new mayor.

In any case , it is important that those reading the charges should know 10 key points first.

1) I sent files that show potential large scale financial misconduct to investigators as early as January 26, 2012. During a federal deposition (12CV 3141) last month, Principal Linda Hill testified that I had no negative items in my file prior to that timeperiod. (Transcript coming soon). No investigations, no disciplinary letters and no unsatisfactory observations.

2) After several days of being the subject of extreme attacks, I sent the following email to District 31 Superintendent Erminia Claudio on Sunday January 29, 2012: 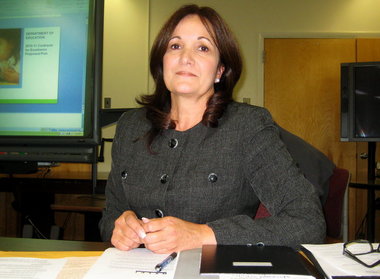 From:Francesco Portelos<fportelos@gmail.com>
Date: Sun, Jan 29, 2012 at 11:28 AM
Subject: Issues at Berta Dreyfus IS 49
To: eclaudi@schools.nyc.gov

I hope this email finds you well. We have met before when PrincipalLinda Hill has brought you to my classroom during a site visit. I am an Environmental Engineer who 5+ years ago decided to take a $20,000 cut in salary to create more engineers. I have created and run the IS 49 S.T.E.M. Lab for 5 years now. The success ofthelab with my different way of teaching has been unimaginable. I’d like to tell you more in person.The reason I write to you is because in the last few weeks my teaching and my efforts at the school have come under attack by the administration. It all aligns with the time period when I started asking tough questions at the SLT and Union meetings that the administration didn’t want to address. All I wanted to do is write a goal for the CEP that addressed the 75% of the student population that was missed by the first 3 goals.
I am
Please allow me to meet with you at your office and keep any meeting between us. I do not have all the details of what is happening. All I know is that for years I was praised and called “an amazing asset to the school” as well as “a great find” by Linda Hill. I have received nothing butSratings on observations including one thatIrequestedto be done on me in December. I have great letters of recommendation from two Assistant Principals and Ms. Hill as well as by after school employers.
I wait to hear from you as I approach what may be a very tough week for me. In the mean time you can see these articles I am mentioned in as well as my very popular site that educates my students, their parents and siblings.

———————————
I was originally happy that she responded right away and even called me that very same Sunday night. Knowing everything I know now, that appeared to be the start of the end for me. The next day all my negative documents started with three investigations and two disciplinary letters all in one day. I had no idea that Principal Linda Hill was selected and recommended in 2005 by none other than currentFranklin Township Superintendent Edward Seto, Erminia Claudio’s boyfriend. He is actually also a superintendent and also being sued for retaliation in NJ. Maybe their private relationship is irrelevant or maybe it is veryrelevant. If Linda Hill is found to have engaged in financial misconduct that I reported, who would also look bad One would probably be the one who recommended her. Two would be the one who rates her “ExceedingExpectation” (see below) and oversees her per session overtime. (Or doesn’t supervise her per session).

Superintendent Erminia Claudio Rating of Principal Linda Hill
According to the financial files I acquired below, it appears that Principal Hill made almost $40,000 in unsupervised per session overtime. There are about 119 handwritten entries in lieu of a digital clock and Superintendent Erminia Claudio’s signature is missing from every time card and per session document Was someone looking the other way I can’t find another principal who has made that much per session. Oh except for Principal Liza Cruz Diazhttp://nycsci.org/reports/01-12%20Cruz%20Diaz%20Report.pdf

You won’t find an SCI publishing a report like this as they referred the case to the DOE’s Office of Special Investigation (Case 12-533). Yes, basically the DOE is investigating itself for over a year.
Here is the response from Superintendent Erminia Claudio:
—————–
From:Claudio Erminia<eclaudi@schools.nyc.gov>
Date: Sun, Jan 29, 2012 at 2:40 PM
Subject: RE: Issues at Berta Dreyfus IS 49
To: Francesco Portelos <fportelos@gmail.com>Dear Francesco,Thank you for reaching out to me. I would like to speak with you, but will not be in all next week. Please email me a number you can be reached at. I will call you this evening.E. Claudio
Erminia Claudio
Superintendent
Community School District 31
715 Ocean Terrace
Staten Island, New York 10301
718-420-5667
Fax:718 420-5665
eclaudi@schools.nyc.gov
————————
She did call me that night of January 29, 2012. We spoke for about 30 minutes.

Although I do not remember all the details I remember how it ended. Paraphrasing -“Mr. Portelos, you speak to your union representative, Sean Rotkowitz, and I will speak with Ms. Hill so we can sort this out.” I thought “Great. We might have nipped this in the bud.“, but I was terribly mistaken as within 24 hrs later, Principal Hill drafted my very first two disciplinary letters and called inthreeseparate SCI investigations.
3) Perhaps they knew that I was a tech savvy parent in the community, and not just a curious teacher. Perhaps they were afraid that I would continue to obtain information. Perhaps this is happening in many of the 1800 schools and this is why I have been targeted by not only local district officials, but also the top officials at Tweed. “If this guy keeps unearthing misconduct at IS 49, where else will he find corruption and who else will follow suit” Former Chapter Leader Richard Candia had sent me the text below that kind of spells it out. He also met with Superintendent Claudio for hours and told herabouttheper session issue and other potential misconduct. Allegedly she stated “I’m not taking her [Hill] out.” 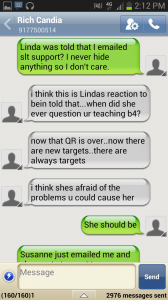 Sent to me after Rich was called in to admin office 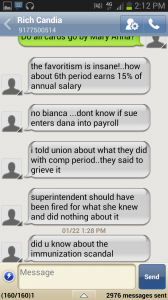 4) See here just some of the financial issues I have come across. As far as I know there is an investigation, but it is only by the DOE. Again, DOE investigating DOE is not something that should sit well with us. The zipped file here includes school credit card information allegedly showing broken down payments to vendors like PINMAN and uses for personal items at Waldbaums. See also the NYC DOE Audit and plethora of time cards for the Office of Safety and Youth Development’s Achieve Now Academy or DANA. Achieve Now has been budgeted at over $2 million a year. CLICK HERE FOR FINANCIALS
5) My UFT Chapter Leader Richard Candia and former School Leadership Team Chair Susanne Abramowitz were involved in some of these claims. I currently have a Supreme Court Defamation case (Richmond County 100309/13)
6) The NY State Division of Human Rights is currently investigating Assistant Principal Joanne Venier Aguirre for sexual harassment (Case 10160037). Yes, I know this story is crazy, but I have not found one person that can point out a false claim I have made on my site, nor have I been sued for defamation.
7) I have a Federal Lawsuit that claims First Amendment Right violations. Filed with the Eastern District (12 CV 3141). As a public citizen I raised issues of public concern and have been retaliated against. This didn’t happen, but is happening live now. In addition, we are attempting to amend the complaint as I continue to raise public concerns such as the teacher exile process where we are treated as guilty until proven innocent.
8) An SCI report came out and although it was very vague and confuses the public and attorneys, it concluded with this:

9) Most importantly, this case has negatively affected countless students. Not only have my 300+ students had 13+ substitutes the last year, but while in school I implemented many measures that helped the entire community. The DOE should give every student on my roster a partial scholarship to college. See some of their testimonies here
10) Last but not least, this case has cost and will costthe taxpayer upwards of $300,000 in just my salary, salary of substitutes, countless employee hours dedicated to this, more than 11 investigators, countless DOE attorneys, court subpoenas etc. Not to mention the 3020-a arbitrator that is paid $1200/day PLUS expenses. My hearing is estimated to take months.
Having said all that I present you 38 frivolous charges that were drawn up in attempt to silence me and teacher futurewhistle blowersa lesson. Let the publicized workplace bullying continue.

The hearing will be public.

Journal Entry 5/22/13– I have filed a request for a hearing, but there is a major problem already. As per the NYS 3020-a law, and this document below, there should have been an executive session meeting where my charges were reviewed and probable cause was found to move forward. As you can see the date is missing and no one has been able to give me details of this executive session. Also see Betsy Combier’s site where she documents this violationas well as a plethora of other items. 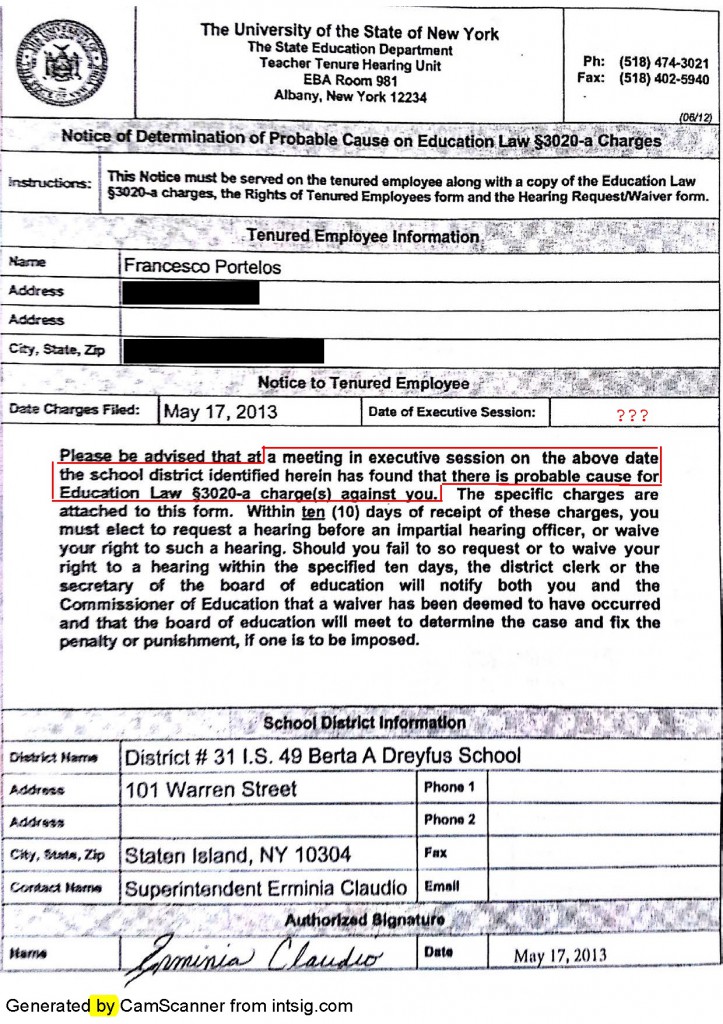 UPDATE 5/25/13– Probable Cause Letter Received from Laura Brantley. Guess who found probable cause to bring these frivolous charges against me. That’s right….Superintendent Erminia Claudio.

See letter here. Notice the date of the letter and the date of Betsy Combier’s FOIL request here. I received my charges on May 17, 2013: 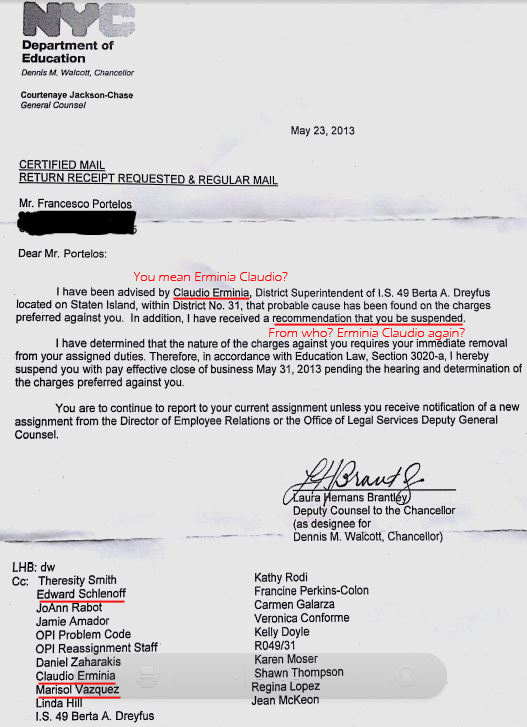