Today’s DNAInfo.com article titled Eva Moskowitz’s Success Academy Got Preferential DOE Treatment, Emails Show, discusses how DOE leaders bent over backwards to accommodate schools for Success Academy Charters. One of those that laid down the red carpet was Deputy Chancellor of Operations Kathleen Grimm. She made sure rooms were empty and swept clean before the arrival of Success Academy. The article also shows that Kathleen Grimm was pretty quick with responses.

That is strange, because I wrote an email to Kathleen Grimm about how her information was wrong and asbestos was disturbed at a school and there was no containment in place. For those of you who don’t know, asbestos fibers inhaled can cause cancer of the lungs. The thing with asbestos is that it also can take years before you see symptoms and it depends on exposure.

Principal Hill hired a non-SCA approved contractor to do a non-SCA job. They came in and demolished a wall. no containment. No asbestos inspection. No clean up as per the Standard Operating Procedures (SOP). Who cares It’s just IS 49, a school nestled between two housing projects. Not even the Community Education Council of Staten Island did anything about it.

Here is an email from former Superintendent Erminia Claudio to her supervisor Donald Conyers the morning she got wind that I was going to publicly discuss the issue: 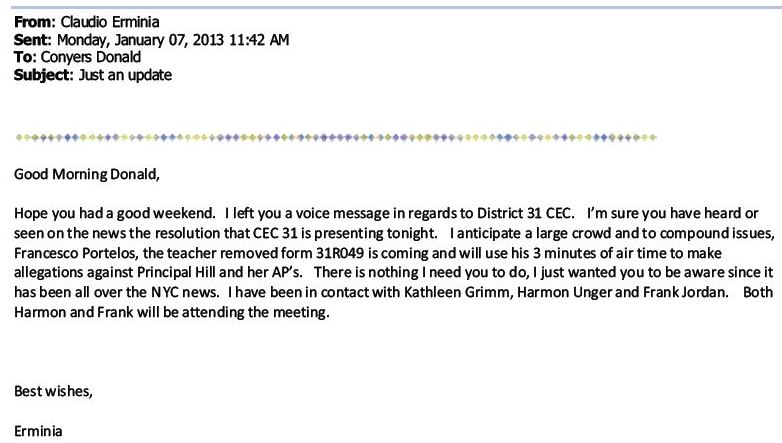 It doesn’t stop there. Deputy Chancellor was quick to do her own research and then give false information to hide the fact that dangerous asbestos went airborne in a school of 1,000 students and staff. 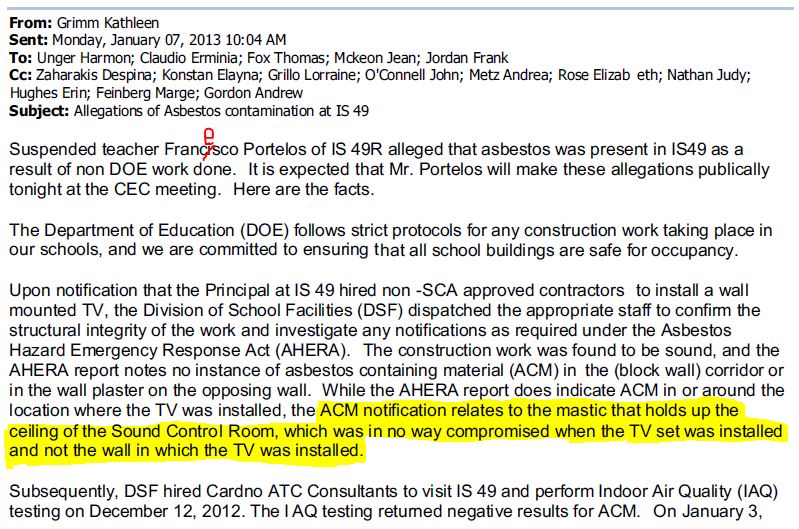 I wonder if Kathleen Grimm, who is the Deputy Chancellor of Operations looked at the school’s AHERA report herself, or just had an intern skim through it.

I looked at it myself and found that her information was unfortunately incorrect. Keep in mind that a bulletin board was taken down and the mastic that held it up was pulverized into a dust. 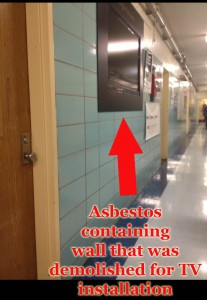 Here is the AHERA report for IS 49: 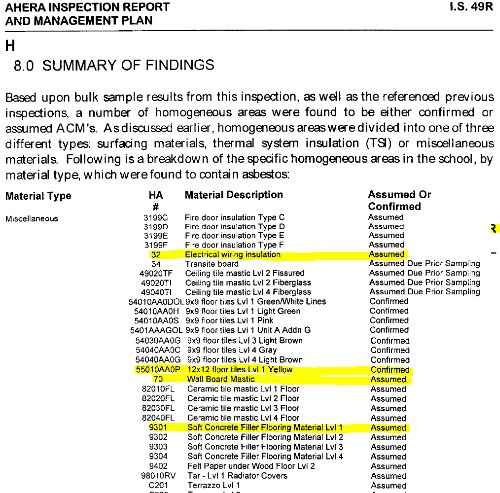 Even if you knew nothing about asbestos inspection, could you see that according to the report above, Wall Board Mastic (glue) is assumed It should be treated as positive for asbestos.

Where are we now The answer is nowhere. The CEC turned it’s back. I spoke to SCA who wanted nothing to with it as they said “This wasn’t our job. We weren’t included.” The Division of School Facilities agreed with my report, but asked… “What can we do..what is done, is done.”

How about a registry and we included all students, staff members and visitors in the building around that time This way, ten years down the line, IF something were to start happening to that school year’s population, it is documented

Here is my email to Kathleen Grimm that could not be graced with a response:

From:Francesco Portelos<fportelos@gmail.com>
Date: Tue, Sep 17, 2013 at 12:31 PM
Subject: You asbestos disturbance at R049 information is unfortunately incorrect
To: kgrimm@schools.nyc.gov
Cc: Conyers Donald <dconyer@schools.nyc.gov>, Unger Harmon <hunger2@schools.nyc.gov>, Jordan Frank <fjordan3@schools.nyc.gov>, “jmckeon3@schools.nyc.gov” <jmckeon3@schools.nyc.gov>, Zaharakis Despina <dzahara@schools.nyc.gov>, EKonsta@schools.nyc.gov, LGRILLO@nycsca.org, jO’connelljr@nycsca.org, AMetz@schools.nyc.gov, ERose2@schools.nyc.gov, JNathan@schools.nyc.gov, EHughes@schools.nyc.gov, MFeinbe@schools.nyc.gov, “Rodi Katherine G.” <krodi@schools.nyc.gov>, Vazquez Marisol <mvazquez16@schools.nyc.gov>, RSinger4 <rsinger4@schools.nyc.gov>, Courtenaye Jackson-Chase <cjackson-chase@schools.nyc.gov>, “CEC31@schools.nyc.gov” <cec31@schools.nyc.gov>, Sam Pirozzolo <spirozzolo@gmail.com>, cecmike@verizon.net, “mmulgrew@uft.org” <mmulgrew@uft.org>, “epietromonaco@uft.org” <epietromonaco@uft.org>, Sean Rotkowitz <srotkowitz@uft.org>, Debra Penny <dpenny@uft.org>, Chris Proctor <cproctor@uft.org>
Good morning Ms. Grimm,
I’m a parent and educator from Staten Island’s North Shore. According to a review of 3,000+ pages worth of the emails, I received for my Federal case, you seem to be very aware of who I am. Therefore, I will skip formal introductions.
These emails were to be used to help my case, and they do, but I can’t help but act on this one attached. It’s an email you sent to most of the employees copied on this very email the day of a public D31 CEC meeting in Staten Island. Your email describes a non-SCA approved job that took place at R049. There was no environmental assessment. There were no asbestos containments. There were no HEPA filters or vacuums. The workers were not even wearing the correct respirators (and yes I spoke to them). Worst of all the clean up was only via a wet mop and rags. There are concerned members at the school and yet not one notice went out to explain.
I’m sorry actually the worst part was that, contrary to your email, therewasassumedasbestos materialthat wasdisturbed. In your January 7th email you failed to mention that the glue (Wall Board Mastic) that held the bulletin board up wasassumed Asbestos Containing Material. This was pulverized to a dust to install a flat screen TV. The SCA and DSF personnel copied here will tell you that everything was wrong about this unapproved job. My seven years of environmental inspection experience tell me this was wrong even if no asbestos was found. The entire SOP was ignored. We have 1,000 students and adults that walked those halls during and after. They sat on dusty chairs and at dusty desks. For months teachers were opening and closing closets that still had dust on them, in them and every crevice. Also, running air samples a year and a half later does not mean the air was clean when the job was done.
Please see attached excerpt from the R049 AHERA report. If I am wrong about this, please let me know what part was incorrect. As Deputy Chancellor of Operations, this falls on you to properly investigate.
Sincerely,

“As a matter of self-preservation, a man needs good friends or ardent enemies, for the former instruct him and the latter take him to task” -Greek Philospher Diogenes
———————
No accountability. None.
Ms. Grimm,Before you leave the DOE, the least you can do is set up a registry like they did for 9/11. Perhaps we can have a thorough cleaning now as Eagle Academy was approved for co-location and may be disturbing the dust that has settled behind and under file cabinets. Think about it before you exit.

Oh you might be asking how my speech went. Not horrible, but not great. According to Superintendent Claudio, I was not on my “game”. I guess that means I have game sometimes.

No need to reach out to Chris but just be aware of this situation. I can fill you in on it in morning.

Agreenot sure that reaching out to UFT Health and Safety is immed or necessary. If these
allegations are true and UFT H&S knows, they usually reach out to us right away.

Thanks.I’m worried about no response on this translating incorrectly to “DOE doesn’t care about public
health in our schools”.

Elizabeth, can you follow up with UFT env safety (Ed) to see if they have anything, in addition to
SCA and DSF
Thanks
————————–
Sent from my BlackBerry Wireless Handheld

Andy and Elizabeth, can you review the blog posting and advise Allegations of principal hiring private
contractor for the work and exposing school to asbestos (do we report), mention of DSF work, etc.

So was there a cover up at IS 49 The AHERA report indicates asbestos was disturbed as board mastic was pulverized with no containment.