I Drank the Kool-Aid and it was Delicious!

I’m trying to write about this based on a blurred memory of the events that I think transpired this week. Monday March 11, 2013, I attended the Panel for Educational Policy meeting at Brooklyn Tech High School. There were many upset educators, students and parents present and I sat with my fellow MORE group. I was chanting not to close more schools in between my Tweets (@MrPortelos). 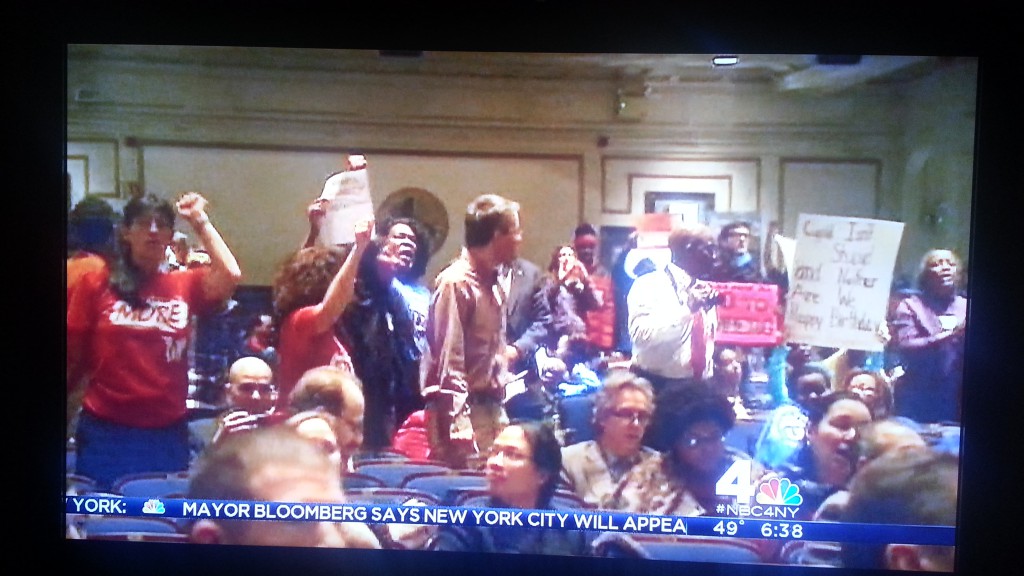 I’m the bald guy on the left who should have been standing and chanting, but was Tweeting instead. 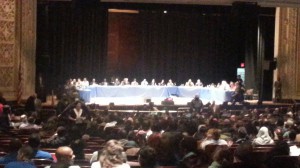 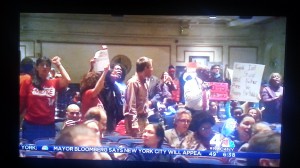 I got up to speak about school closures, but when I reached the mic I couldn’t help butnotice that I now had the undivided attention of some DOE top brass who dodge my calls and emails during the day. Chancellor Walcott was there. So was Deputy Chancellor of Labor Relations David Weiner, who keeps saying “I’m sorry but I don’t know who you are”.Chief Financial officer Michael Tragale and head DOE attorney Courtenay Jackson-Chase were also there. Rumor has it she runs the DOE and Dennis Walcott answers to her. 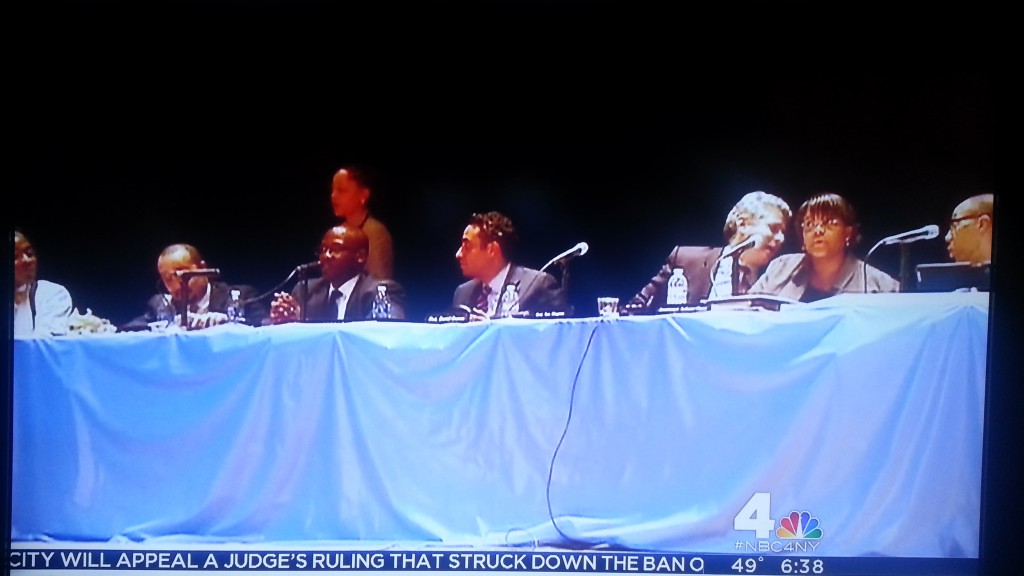 You can watch my two-minutespeech here. My apologies to PEP members Patrick Sullivan andDmytroFedkowskyj who had a resolution for a Moratorium on School Closings on the table. My school however is probably in a “pre-closing, let it fail” stage (www.occupywarrenstreet.org).

After I spoke Iwalked up the aisle to leave and was greeted by a principal, parents and teachers holding their hand out for pounds, thumbs upand high fives.

I had to leave after that as I was already late in picking up my lovely wife and kids. I headed home and here is where it gets weird and blurry.

After I pulled up to my drivewaywe brought the boys and diaper bags up to the house. Irealized I forgot my laptop and wentback to get to the car to get it. As I shut my trunk I turned and saw two gentlemen standing behind me. They were wearing suits, raincoat, fedoras and sunglasses even though it was about 10PM. One washolding a large paper bag. 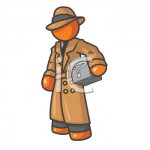 “Mr. Portelos, we need to speak to you a moment.” the shorter one said.

“What’s this about” I asked, skeptically. (I was hoping we were still in the line of sight of my security camera just in case things went down.)

They both move past me and lay the large wrinkledpaper bag on the trunk of my car. As the taller one unraveled the top of the wrinkled bag and opened it, I remember seeing a glowing lightcome out of it. Kind of like when John Travolta opened the briefcase in movie Pulp Fiction.

The taller man reaches in and pulls out a cup and a glass pitcher full of water. How he had not spilled it was beyond me. Next he pulls out a small Fruit Punch Kool-Aidpacket with the label “For Emergencies Only” written on it. He actually proceeded in mixing Kool-Aid on the trunk of my car.

He poured the contents of the mixture from pitcher to cup and hands it to me…. “They want you to drink the Kool-Aid.” he stated calmly.

“We think you know who wants you to drink the Kool-AidMr. Portelos” they both said in unison.

I’m a curiosityfellow and I feltI had no choice. Plus I was very parched from my two-minute speech earlier. I took the cup and drank it.

I felt as if a cloud had been lifted from around my brain. I had never felt such a sense of clarity ever in my life. It was very exhilarating. I felt that I had the answers to everything and all my neuron receptors were in 100% sync with each other.

“How was that Mr. Portelos” The shorter fellow asked.

“It was delicious! Thank you for providing it to quench my thirst for knowledge.” I answered, surprised at my response.

The taller one took off his sunglasses, leaned in, tookout a pad and penand began asking me a series of questions. Again, like I said before, this is my blurry recollection of what happened.

Man in Suit: Mr. Portelos, what do you think about high stakes testing

Portelos: I believehigh stakesstandardized tests arethe only true way to properly and accurately gauge how well a teacher taught and a student learned. Outside factors have no relevance in the test outcomes.

Man in Suit: Good. Mr. Portelos, do you care how taxpayer money is being spent in your school or any other school even if children are not receiving the services they deserve

Portelos: No. Of course not. It’s none of my business how $7.5 million is spent at my school. As long as the right people are lining their pockets all is good.

Man in Suit: That’s our boy! Mr. Portelos, do you believe in closing schools, getting rid of the staff and pumping money to our friendly contractors to fix the schools.

Portelos: Of course I believe in closing schools. If the staff did a better job of teaching, then the school would not fail. The blame lies entirely on the staff. We need younger and cheaper staff with more energy. The money we could have spent when it needed support can just go in after we close.

Man in Suit: Excellent. Mr. Portelos, what do you think of co-locating a charter school into another public school building

Portelos: It’s a great idea. First, the private companies that run the charter schoolsare spending public money and don’t even have to pay rent. It’s very cost-effective. It also helps suffocate the public school in the building, cause it to fail even more and allows us to point even more blame on public education, teachers and their superannoying unions.

Man in Suit: This is better than we thought. We knew you had it in you. You just needed a little Kool-Aid. Let’s continue with a few more. What do you think about releasing students’ private information, like names and test scoresto private companies

Portelos: Data data data. How else can these companies work on segregating education, creating more tests and increasing the achievment gap Data is king!

I couldn’t believe how clear my thoughts were and how easy the answers were.

Man in Suit: OK perfect. Next, let’s say you were responsible for the DOE’s budget and you need to make cuts. What would you do

Portelos: Go after the most expensive veteran teachers of course. Why pay them $100,000 when we can bully them out and replace them with $50,000 teachers. Simple math.

Man in Suit: Amazing. What do you think the UFT Leadership helping their members

Portelos: They are doing an upstanding job. Teachers do not need a raise and do not need a contract. They need longer hours and more paperwork to distract them from actually teaching. They need more evaluation that is subjective and fewer resources to engage the students. Michael Mulgrew is an excellent Trojan Horse that is helping union bust from the inside and his lip service has fooled many of the members.

Man in Suit. Excellent! Excellent! We will be in touch Mr. Portelos. Try and stay out of trouble and don’t ask any questions.

They packed up and disappeared around the corner. I slept like a baby that night with a huge weight lifted off my chest. What was I thinking Blogging and documenting corruption Speaking up for rights of students and teachers I must have been nuts.

Luckily the Kool-Aid wore off right as I was about todelete this blog and my digital arsenal. My thirst for knowledge however continues…

Parent and Educator fighting for the student and the teacher.
View all posts by Francesco Portelos →
Tagged  Courtenaye Jackson-Chase, Deputy Chancellor David Weiner.
Bookmark the permalink.