DOE: “We have nothing on you Mr. Portelos”

Today is 253 days since I was wrongfully removed from Berta Dreyfus IS 49. Today is also 339 days since an investigation was started on me.

Please keep these two numbers, 253 days and 339 days, in your head as you watch a few seconds of this clip.

I filed a grievance with the DOE and had my Step 1 hearing on November 16, 2012. Besides not hearing anything from the DOE that warrants my continuous exile, they only had 5 days to come up with a decision. The contract says 5 days and the DOE, because they have noting on me, responded with the following 27 days later. Rules What Rules 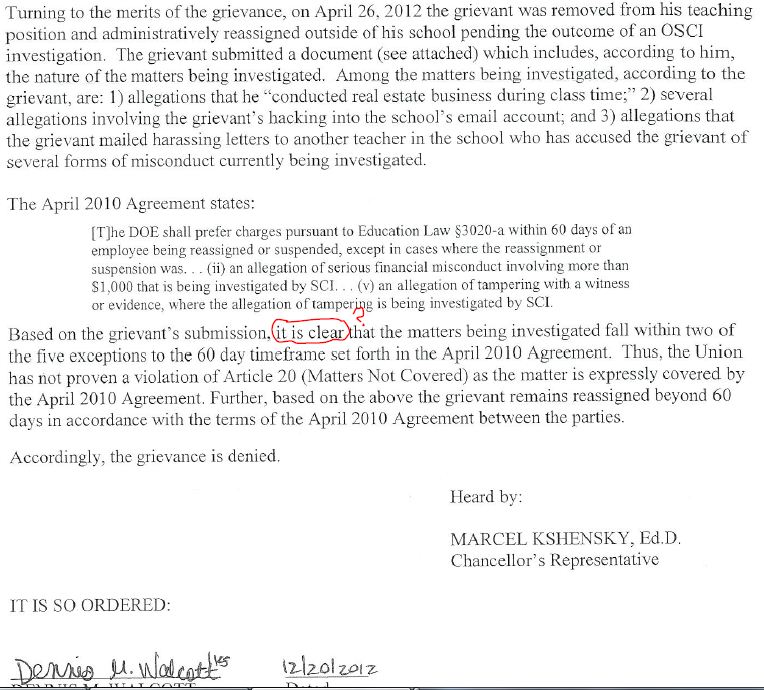 For some reason, my union waited a month to file a Step 2, which I had on December 21, 2012. This time they brought in Allison Biller, an attorney, to hear the case. I am waiting for that decision. She seems fair, but we will have to see. I did ask “How can I tamper if I didn’t know I was being investigated ” I heard about the investigations 50 days after I was removed.

So there you have it…

Over 450 students have been affected by this and for what Because former UFT Chapter Leader, Richard Candia, and Principal Hill felt I was a threat and made false allegations They made SCI investigators chase their tails and waste their time. Wasted countless tax dollars The cuffs need to come out…it’s overdue.

In other news, the asbestos issue is growing.