On October 14, 2009 Johnathan Halabi, of New Action caucus, made a motion to endorse Bill Thompson for NYC Mayor. As you can see in the article below, UFT Leadership stepped in and the delegates voted not to endorse him. Bill Thompson wound up losing by only a small margin. I’m surprised they published a picture of these members. I wonder if they think they made the right choice.

What if we went back in time Would we have made a difference with 200,000 members andfamilies voting for Thompson Would we still have all these school closings Some education reformers may think not. They say this attack on education is national and global and it doesn’t matter who the mayor is. See Episode 1, 6 and 7 of DTOE Talk and see how similar other parts of the country are.

Somewhere out there in a parallel universe, Leroy Barr may not have stood up against endorsing and Johnathan Halabi’smotion might have carried. Hmm…. I guess we will never know. Where is my DeLorean 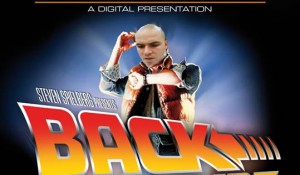 The delegate body votes to postpone any endorsement.

Paul Egan, director of legislation and political action, advises the delegates to weight all the options before endorsing a candidate in the mayoral race.

After a spirited debate, the UFT delegate body voted overwhelmingly on Oct. 14 to postpone a resolution to endorse William Thompson and to remain neutral for the time being at least in the upcoming mayoral election.

Arguing for postponing any endorsement, UFT Staff Director LeRoy Barr said, Three weeks is a long time in politics. Right now, we are players. Im asking that we remain players in this race.

He reminded delegates that whatever their personal politics, their responsibility as delegates was to vote for whats best for the unions 200,000 members.

Alluding to the complicated politics involved in making a decision that will directly affect the union for years to come, Barr said, I strongly suggest that what is best for the members is to postpone this debate.

If the political scene changes, Barr added, the UFT can always call a special Delegate Assembly to vote on an endorsement.

The debate was prompted by a motion from the floor by Jonathan Halabi, chapter leader at the HS of American Studies at Lehman College, to endorse Thompson.

Paul Egan, the UFTs legislative and political action director, talked to delegates about the need to weigh all the options and consider how the race is shaping up. He described a David and Goliath battle in terms of campaign spending, the lack of consensus between labor unions and several polls that had Bloomberg far ahead of Thompson. We have to ask ourselves, What would we gain by getting in What would we lose

Taneeka Jones, the chapter leader at PS/MS 42 in Queens, agreed that the union should remain neutral. She said that Thompson has not laid out a plan for education. 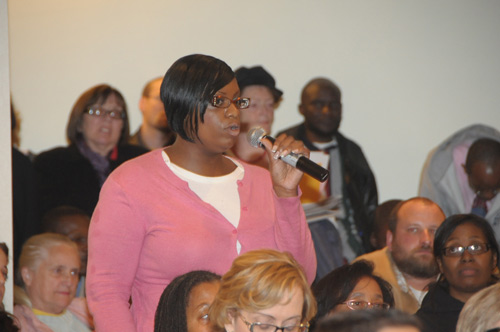 Taneeka Jones, chapter leader at PS/MS 42 in Queens, says that the union should remain neutral.

Edward Hernandez, a delegate from IS 136, said he was in favor of supporting Thompson because he was tired of [Bloombergs] taking credit for the work I do every day. He added, I dont say we should throw ourselves on our swords, but we shouldnt run away from a fight either.

The delegates then voted to postpone any endorsement.

A week after the Delegate Assembly, Thompson told the Daily News editorial board that teachers shouldnt get the 4 percent raise that other municipal workers have won over the last year because the city cant afford it. He also said that he supports creating a new pension tier for new city employees, but that it should be devised collaboratively with unions at the table.