Dear Records Access Officer:Under the provisions of the New York Freedom of Information Law, Article 6 of the Public Officers Law, I hereby request a copy of the records, or portions thereof, pertaining to the following:

The total number of 3020-a hearings requested by the New York City Department of Education pursuant to Section 3020-a(2)(d) of the Education Law for each of the following years:

The total number of 3020-a hearings requested by all school districts within New York Statepursuant to Section 3020-a(2)(d) of the Education Law for each of the following years:

Notes: Do NOT aggregate data for the school years.

I understand there is a fee of $.25 per page for duplication of the records requested.

As you know, the Freedom of Information Law requires that an agency responds to a request within five business days of receipt of a request. Therefore, I would appreciate a response as soon as possible and look forward to hearing from you shortly.

If for any reason any portion of my request is denied, please inform me of the reasons for the denial in writing and provide the name and address of the person or body to whom an appeal should be directed. 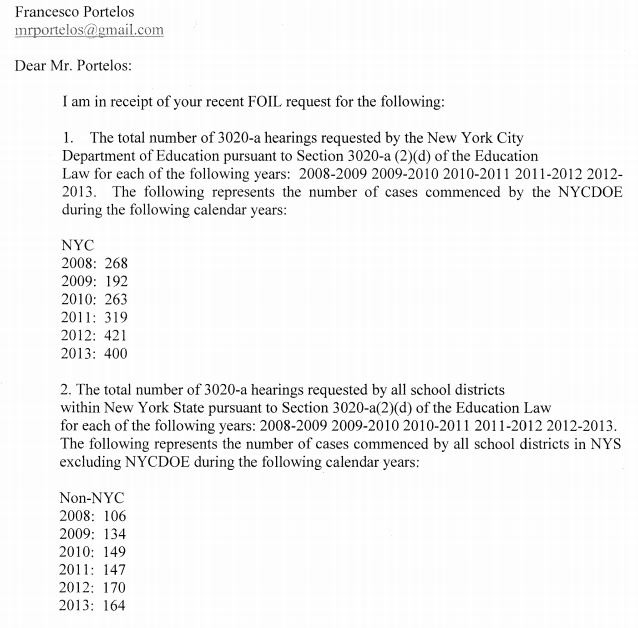 Now we took these numbers, starting from 2008, and combined them with numbers targeted educator Michael Thomas FOILed from 1999 to 2008 and we get… 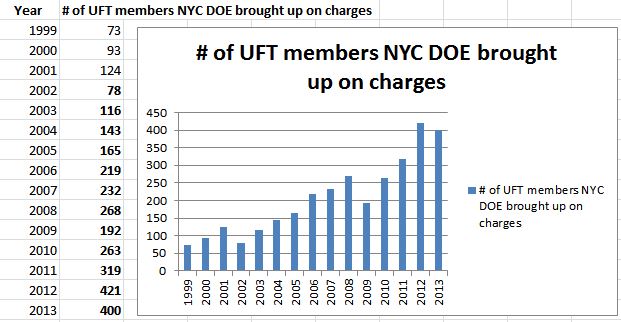 See that steady incline in requests for termination (Scientists hypothesize that there was some bacteria in the NYC drinking water that caused this.) Perhaps there was an agenda such as attack stronger and experienced veteran teachers and replace them with younger, cheaper and docile ones. There is a steady incline since Mayor Bloomberg took over the school system, except for a dip in 2009. Me, as an engineer, would call that an anomaly, however, I believe Mayor Bloomberg’s campaign in 2009 may have played a role. “Ease up and maybe they will vote for me.”

Not really. Today, an estimated 500+ UFT members reported to reassignment centers in district offices and their own schools instead of for real duty.

Shhhh… no one is supposed to know that since Mike Mulgrew and former Mayor Mike Bloomberg closed them in 2010.

In any case, I decided to share what I learned from my friends here in NYC, about FOILing, and share with our union brethren in Los Angeles who had contacted me.

NYC TEACHER – CRUSADER Francesco Portelos : How to Use FOIL in LAUSD

Also, check out the new UFT caucus I was involved in spearheading. www.solidaritycaucus.org

Parent and Educator fighting for the student and the teacher.
View all posts by Francesco Portelos →
Tagged  3020-a, foil, tenure.
Bookmark the permalink.