Dissecting the Pirozzolo vs State of NY Teacher Tenure Lawsuit

The fight for a proper public education in this country is multifaceted. If you want to get involved, you have to pick a front and get ready for battle. Myissueis that I get involved on many fronts, shooting arrows acrossthespectrum hoping to make a positive difference somewhere.Why are we even fighting over educating our children Why are we disagreeing Well, it’s because of money, not because of students.

When I first heard about theVergara vs Californiateacher tenure lawsuit I thought “What problem does the beautiful and ever so talented actress Sofia Vergara have against teachers” Then I did a little more research and found it isn’t Sofia, but student Beatriz Vergara and several other students that brought this lawsuit. For a nanosecond I was proud of these students. Just a nanosecond though. Even though I disagree with the lawsuit, I always like to see the youth taking a stand. Then I did a little more research and found these students are being used as pawns by a group called Students Matter and are backed by billionaire David Welch and Ms Campbell Iwannastayrelevant Brown.

The decision came in and the California judge deemed teacher tenure protections as unconstitutional.

Without skipping a beat others jumped in across thecountry. [Enter Mona Davids and Sam Pirozzolo stage right]

I didn’t know who Mona Davids was until about a month ago. Apparently from her tweets, she knew who I was as she tweeted this to me:

Wait a minute… Mona Davids, self appointed president of the NYC Parents Union has read about the corruption and attacks on our children, written by a fellow parent on my blog and never stepped in to aid

As far as Sam Pirozzolo, VP of the NYC Parents Union and President of theStaten Island Community Education Council 31, I believe we have had an up and down relationship.

I have sent him and theCEC over 50 emails in the last two years. Yes 50 emails discussing everything from financial misconduct to safety issues at IS 49 Berta Dreyfus. Did he and the CEC step in and do something No. What about the hundreds of children hurt both physically and educationally at just this one school Where is that listed in the lawsuit

Let’s say Sam had a good reason to email the CEC “It is my extreme advice that no ones respond to any of Mr. Portelos’s emails.” on May 8, 2013. Maybe it was a legal issue. Who knows, but does that prevent them from making recommendations to fix the issues

Instead, former Superintendent Ermina Claudio jumps in with:

This email was sent after she called him “a fool” to Deputy Chancellor Kathleen Grimm behind his back. SeeSI Supt to Kathleen Grimm: Sam (Pirozzolo) is a Fool

Who knows Maybe she called him a fool because he was asking the right questions about IS 49. Maybe he will tell us one day.

In any case, I happened to run into a copy of the actual lawsuit and started reading the names of the studentplaintiffs (the children of theNYC Parents Union members).

There is no doubt that Staten Island parent Angela Peralta is a great mother to her three daughters. A quick Google search will show you that. What I don’t get is why she listed her daughters as plaintiffs in a suit against teacher protections when just two years ago she wrote this comment on Diane Ravitch’s blog. 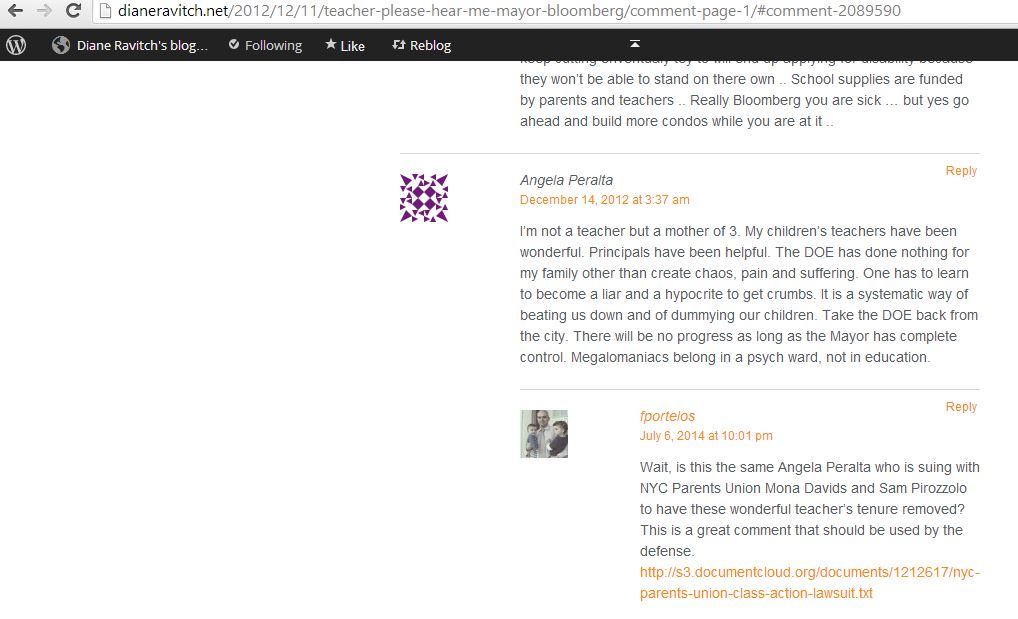 Then I googledother plaintiff’s and found this great article about Sam Pirozzolo’s child’s teachers at PS 69.

Was Ms. Silva an incompetent teacher that should be fired

Then I did a search for one more plaintiff and went to bed.

“Izaiyah, Ms. Oke said, has been acting out in school, throwing tantrums and harming himself and other students. He was recently given a diagnosis of a mood disorder.”

Really unfortunate story, but child is now a plaintiff in the teacher tenure lawsuit. Teacher’s fault

Mother Escapes Abuse, Only to End Up in Shelters With Her Weary Sonhttp://ow.ly/yQeCM

These are the same lawyers that Sam Pirozzolo attacked in his 2011 post:

“Mayor Bloomberg would be able to save hundreds of millions if not more than a billion dollars with a few sound cuts. He could easily reduce the numbers of lawyers on the DoE payroll. Lawyers do not educate children. He could save tons of money if he would fire some of the countless consultants. Maybe he could eliminate some of the no bid and exploding contracts that plague our system and steal money from our classrooms. Yes the mayor has plenty of places he could save money yet he chooses to attack and intimidate the citizens of NYC…” -Sam Pirozzolo

I miss this Sam above and we, the parents and teachers of NYC need to get him and others away from Mona Davids.

Actually I miss the old Mona Davids too. You know the one who actually posted “We Love Our Teachers!” on her NYC Parents Union blog in 2011. 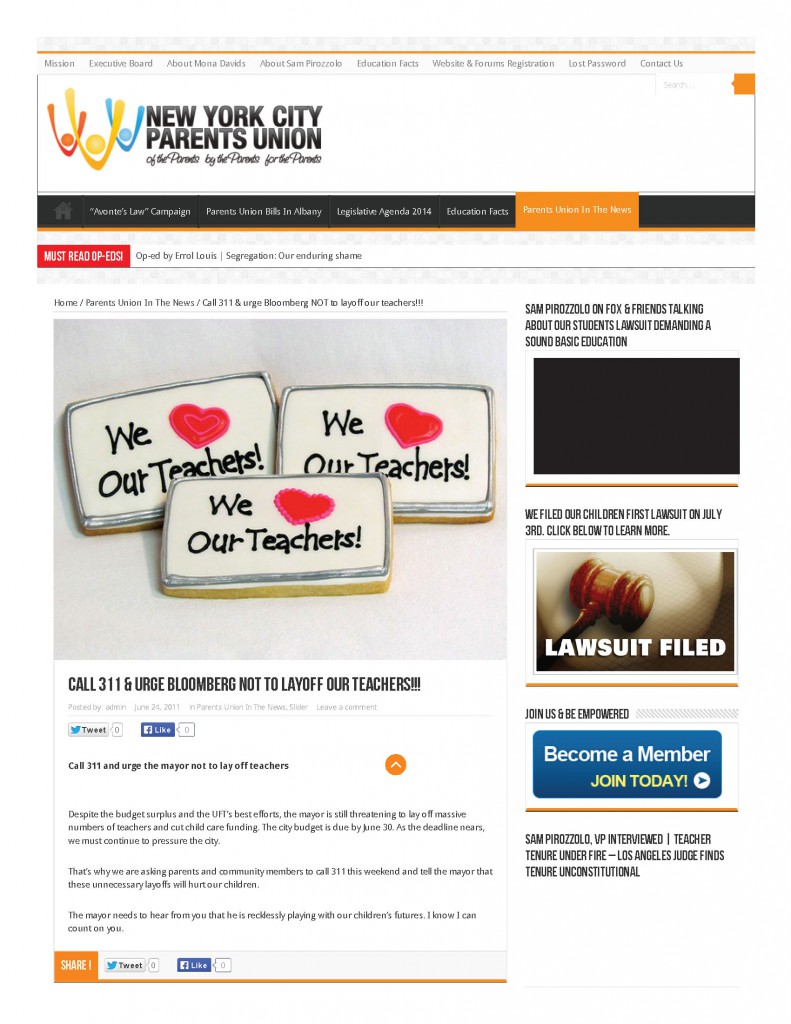 SUPPORT TEACHERS AND THEIRPROTECTION, SO THEY CAN EDUCATE YOUR CHILDREN.

Unless your Mona Davids who issued a press release out today stating I threatened these children during a sarcastic tweet to @MVOtter. I guess the real threat isn’t physical, but one of being outwitted. Now thenews is calling me to respond so Mona can have her name in thepapers again. 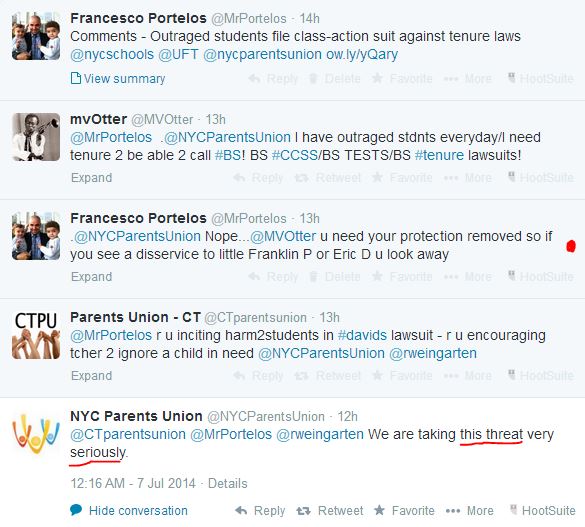 UPDATE IN THE NEWS

Read more stories on attacked and fired teachers at DTOE.org