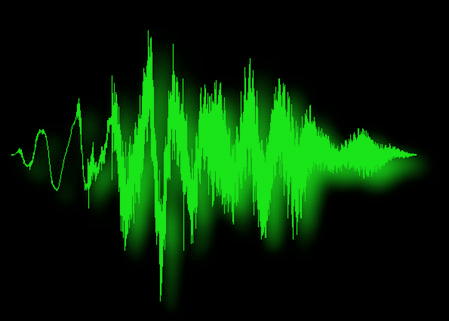 “This conversation may be recorded for quality control purposes.” In this modern-day David vs Goliath, my smartphone is my sling and I wield it very well.

A very vague and confusing SCI report came out on April 25, 2013. In case you have not seen the report it is 15 pages, mentions 35 complaints, took fourteen months and investigated by over ten investigators.

In any case, a few days later I received a disciplinary noticeand I was summoned to meet with District 31 Superintendent Erminia Claudio.

“Why does that name sound familiar Mr. Portelos“

Superintendent Erminia Claudio is who called my house on Sunday January 29, 2012. Just three days after I informed SCI that I believed Principal Hill was engaged in financial misconduct. This was after I reached out to her because of the many issues going on at school. Within just 24 hrs of reaching out to Superintendent Erminia Claudio I had my first THREE investigations started on me and my first TWO disciplinary notices. Yes, I contacted my bosses boss and within 24 hrs my clean record was besmirched with FIVE negative items. I repeatFIVE in less than 24 hours. It later turned to almost THIRTY in just three months and Superintendent Erminia Claudio was there at ever step including reassigning me and subsequently moving me twenty miles away from my school, chapter, home, wife and kids.

As you could imagine, I feel as though certain employees in the DOE, including Ms. Claudiobreed mistrust.Therefore I went into the meeting on the morning of May 3rd ready to legally record the conversation. I just did not trust her and I waived my right to bring union representation (That’s another story).

Read this email to see how things went down. The meeting lasted a total of three minutes. Actually 3 minutes 13 seconds to be exact. 😉

This morning I met you, and District 31 HS Superintendent Aimee Horowitz, at your office. Before I could speak to you about audio recording the conversation, for quality control purposes, you started to address it. You indicated that Icannotrecord. I indicated that I would like to for quality control purposes and as is my legal right. You again indicated Icould not and I excused myself to make a call outside. Upon my return I reinforced my right to record the conversation. You stated that wecannothave it recorded and I believe Ms. Horowitz made reference that “this is not a legal hearing.” I mentioned that the DOE is still within the confines of NY State and I referenced the respective NYS Law and penal code. What was not referenced, by you, was anything that stated Icould not legallyexercisemy right to record for quality control purposes or otherwise.
You also indicated that “we are here to address this [SCI] report from April 25th and if you do not want to do that without recording….” I responded “that is not what I said. I recommend we postpone this meeting until Robin Singer or Robin Greenfield can speak or put something in writing.” You said “OK” and the meeting ended.
I await a response from you or anyone else who can put in writing that I cannotexercisemy right to record this or any other meeting.
Thank you and enjoy your weekend.

Parent
Educator
IS 49 Chapter Leader
www.educatorfightsback.org
/////////////////////////////////
So what’s the problem Why are they afraid to have this conversation or any other recorded No accountabilityI rarely take part in any meeting now without a DOE attorney or representative asking me if I am recording. It may sound sneaky to record, but we are not playing with people who are fair, rational or just. In this modern-day David vs Goliath, my smartphone is my sling and I wield it very well.
Imagine every educator, who is being bullied, walks in to every disciplinary meeting and states “I’m recording this as per NYS law. Go ahead…write me up for something frivolous.”

I eagerly await a response from Robin Greenfield. “Who is Robin Greenfield Mr. Portelos” Robin is the Deputy General Counsel and runs the Senior Field Counsel. Taxpayers pay her her a salary of about $146,000 according tohttp://seethroughny.net/payrolls/city-of-ny.She reports to top DOE lawyer Courtenaye Jackson-Chase and has a whole office of attorney’s who guide all the administrators in NYC DOE working under her. She has two additional Robins who work in the office. Three Robins in one office Twenty Five percent of the Senior Field Counsel is named Robin. http://schools.nyc.gov/Offices/GeneralCounsel/Legal/SFC/default.htm

One, Robin Merrill, used to be Principal Linda Hill’s attorney. Not sure what happened, but when I was still in school Linda was asked if she still has Robin Merrill, she responded “No, I have someone better.” I assume she was referring to Marisol Vazquez, her current counsel. I think it was poor judgement to make a statement like that. The other Robin is Robin F. Singer. I’ve spoken to Robin Singer on the phone for my defamation of character case and met Marisol Vazquez at Small claims Court. I havenot met the other two Robins. In any case, I definitely gave them some work to do over the last sixteen months.. How did the UFT put it Ah yes “Portelos, you are breaking rules they have not even created yet.“

Two of the Robins were invited to that great happy hour party to celebrate the closing of 22 failing schools. Remember thathttp://gothamschools.org/2011/07/22/top-doe-official-proposes-happy-hour-to-celebrate-lawsuit-news/

More recently Robin Greenfield appeared in the famous Cathie Black emails that were recently released.http://educatorfightsback.org/cathie-black-emails-searchable/ Apparently she helped draft the document sent to Albany. Nice fluff piece Ms. Greenfield. Did you also come up with “Francesco Portelos breeds mistrust and stability in the school” and the DOE should move to terminate 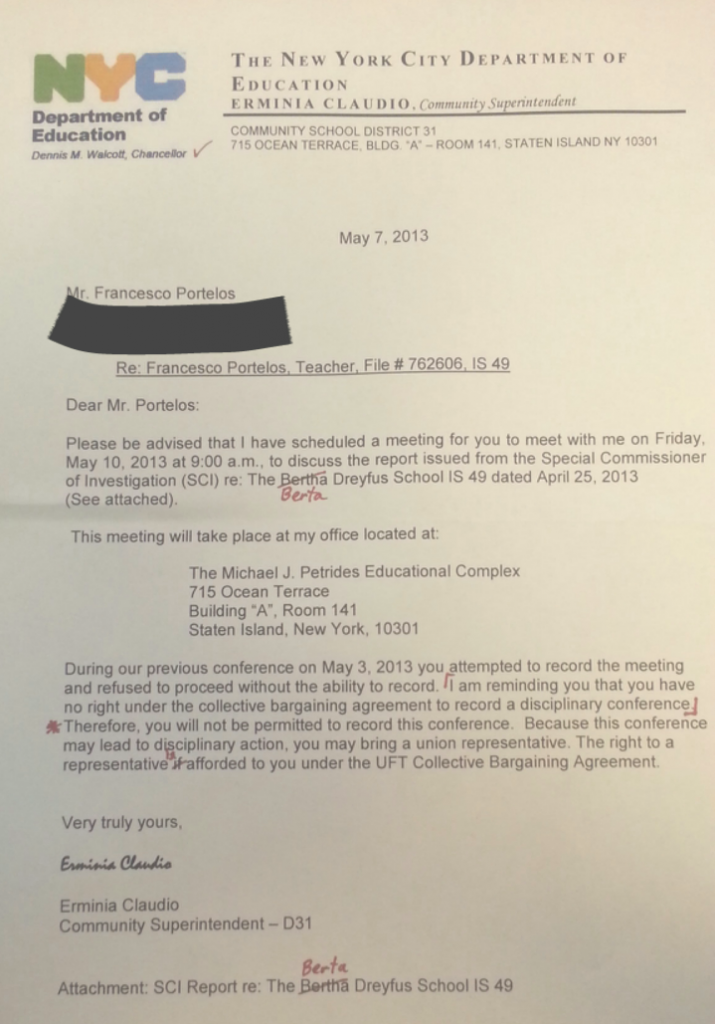 * I did not “refuse to proceed”. Shall we play back the recording See why it’s important I record

I am in receipt of your letter dated May 7, 2013 (attached). You have stated that I “have no right under the collective bargaining agreement to record a disciplinary conference.” I searched the entire CBA and found no mention of audio recording. Neither for or against it. As I stated during our previous conference on May 3, 2013, I am exercising my right under New York State Law. More specifically NY Wiretapping Law Penal Code Law 250.00. Am I supposed to understand that if it isnotmentioned in the UFT/DOE CBA I cannot do it Just to throw in a small analogy; If I was to not fully stop at a stop sign and speed past 15 mph in the Petrides Complex can I reference the CBA if I am pulled over, or do I have to follow state laws
Speaking of the CBA, I came across something interesting in Article Twenty-One Section C:
“C. Summons
1. A teacher summoned by the principal to a conference which may lead to
disciplinary action for reasons of misconduct may be accompanied, at his/her option, by
thechapter leader or his/her designated alternate.
2. Teachers summoned to the office of a community or high school superintendent
or to the Division of Human Resources shall be given two days notice and a statement of
the reason for the summons, except where an emergency is present or where
considerations of confidentiality are involved.
Whenever an employee is summoned for an interviewfor the recordwhich may lead
to disciplinary action, he/she shall be entitled to be accompanied by a representative who
is employed by the city school system, or by an employee of the Union who is not a
lawyer, and he/she shall be informed of this right.However, where thecommunity or
high school superintendentor the Division of Human Resources permitsan attorneywho
is not a member of the city school system to represent any participant in the interview,
the employee shall beentitled to be represented by an attorney.”
Pursuant to this section, I am requesting to be accompanied by my attorney for this disciplinary hearing.

Please be advised that a Department of Education attorney will not be present during the disciplinary conference; therefore you are not entitled to bring an attorney to the meeting. You may be accompanied to the meeting by a representative who is employed by the city school system, or by an employee of the Union who is not a lawyer. To reiterate, you will not be permitted to record the conference, as it is DOE custom and practice not to permit recording of disciplinary conferences.

Perhaps it’s best an attorney from the Department of Education is present as this situation is not only delicate, high profile and in litigation, but also that with new information provided, you may be added as a defendant in an amended complaint of Federal case 12 CV 3141. I’m simply saying this would be best for both of us considering that what both of us say will probably come up in a court hearing.

As we discussed, you are not permitted to record the disciplinary conference. I expect to see you tomorrow at 9:00am in my office without any recording devices. Should you prevent the conference from going forward for a second time, we will take whatever actions we deem appropriate.

I was summoned to your District 31 office for a disciplinary meeting last Friday May 3rd. At the meeting I indicated that I would like to exercise my right as a citizen and record the conversation. You indicated that I cannot. The meeting was postponed. I thought due to pending attorney review of the matter. This Wednesday I received another letter (attached), indicating I should meet you again today May 10, 2013. In addition you wrote I “have no right” to record as per the Collective Bargaining Agreement. You never cited an article or section. I believe that is because one does not exist and that was just another false statement made to me.

After being greeted by three School Safety Agents, I entered your office and stated that I’m again exercising my right to record. I also stated that the UFT told me to “stick to my guns”. You stated there is a policy against it. You failed to reference any law, policy, regulation or article of our contract that prohibits me from recording. I thought you had a week to discuss with attorneys. You tried to imply that I did not want the meeting to take place. That is not true. I always want to explain what is happening and have done so many times on my website www.educatorfightsback.org.

The meeting ended and I left, but not because I wished it to. I’m more than happy to address the SCI report, without recording, if you can show me something that states I legally can’t. I’m all about following the law.

On my 380th day of wrongful exile, I will drive 20 miles from my community school, and sit at an empty cubicle. The taxpayer will continue to cover that bill. This parent and educator is waiting to see when someone will step up to resolve this issue that has negatively affected countless children and adults.

Keep in mind that I’m still uncovering more allegations of financial misconduct on Principal Linda Hill. $40,000 in unsupervised overtime Using the school credit card for personal items Breaking down payments so she doesn’t need authorization Your signature appears to be missing from all time cards. Why http://educatorfightsback.org/all-down-hill/

Today 5/15/13 City attorney states that charges against me have been delayed because I insist on recording disciplinary hearing with superintendent. Federal magistrate responds “What’s the problem with recording” Lol.

UPDATE 10/10/13 – I finally received a copy of my personnel file and guess what. No letter of discipline from this event.