A Shot of Whiskey to Help Boost Grades

DISCLAIMER: In no way am I stating that the underage use of alcohol will help boost grades. 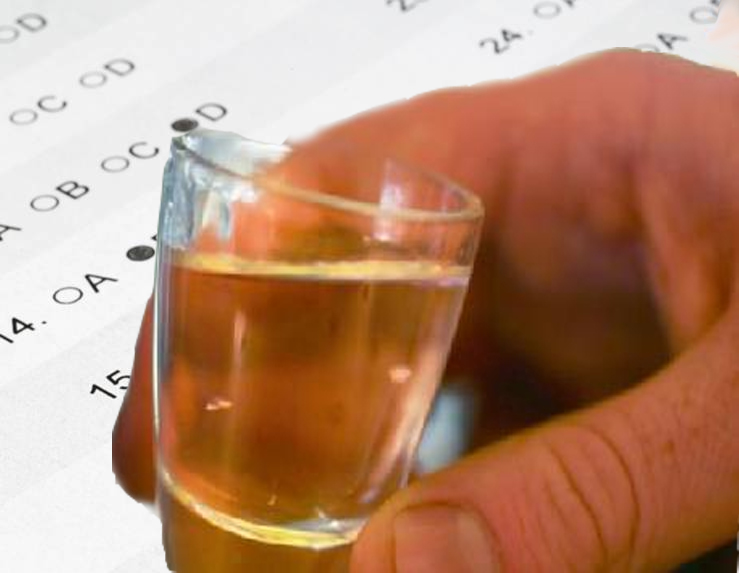 You are not going to believe this story. Actually you are, if you have been keeping up here with this ongoing saga. Nothing is outside of the realm of possibility.

Picture it… October 2007. It was my second month as a new teacher. I was used to dealing with iron workers, foremen, track inspectors et.c and now I was dealing with 11-15 year olds. I was already having weird dreams of teaching class under water and having to come up for air before diving back down again. I know, very Freudian. The backdrop to this story is my original computer lab before I remodeled it. They allegedly spent a million dollars on this lab before I got there with machines, cubicles and partitions. See picture below. Yes, imagine middle school students behind partitions and a new teacher. Oh the fun of running around that middle island section. 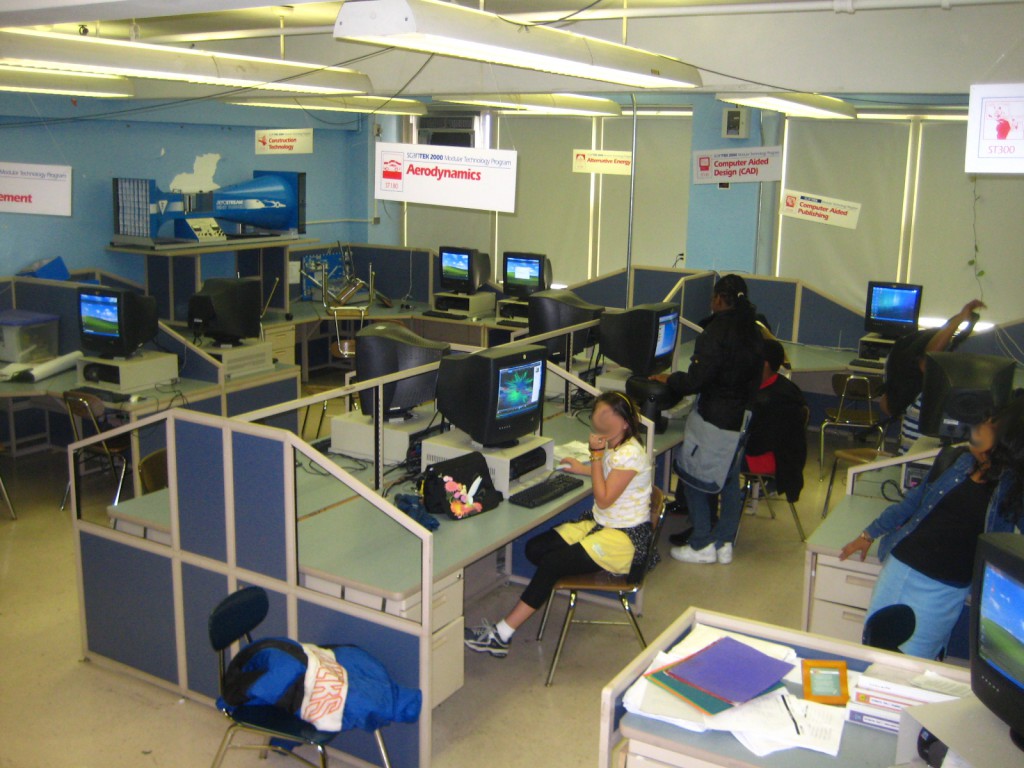 Mr. Portelos’ Lab with some partitions removed (before remodeling) 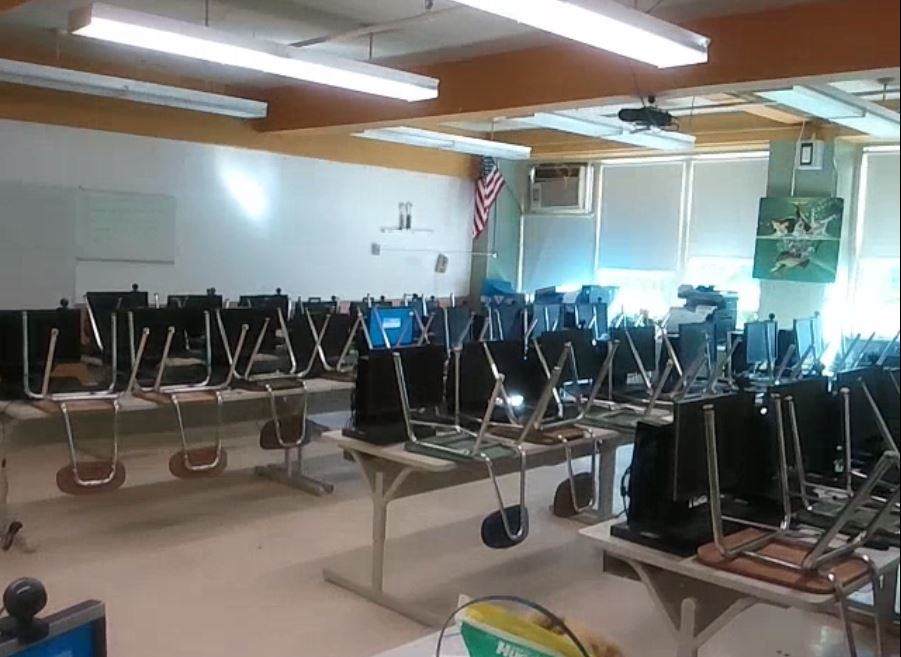 The lab above has unfortunately since been dissolved. :/

Anyway, it was October 2007. Although the million dollars was spent on and used for the top Magnet honors students before me, that was not the population of mystudentsmy first few years. I was given a mix of general and special education students all in one class. Most that were friends were only reunited during my two period session, so you can imagine the chatter and comotion. This day was a half day due to Parent Teacher Conferences. For those of you who don’t know half days are sometimes especially crazy, because classes are short and it is the next best thing to a day off for students. Despite it being a half day, I still attempted to teach students and gave out an assignment. As I was at my desk conferencing, my olfactory senses picked up a whiff of alcohol. My nose went up sniffing like that of a hunting dog. Not just alcohol, but more specifically…whiskey. How did I know I admit it is usually my drink of choice. I got up from my seat and and began walking around the partition opposite where the girl in the picture above was sitting. Low and behold I see a student with a shot glass and brown translucent liquid in it. He sees me and quickly pops the liquid into his mouth. I thought I was going to faint (remember it was my second month teaching). “Oh My God…Oh my God.. are you serious” I yelled out to the student as I reached for the glass and bottle. “Yo chill mister! Relax.” was his response. He gets up with everything and starts walking towards the back of the room around this ridiculous partition maze.

I realized chasing him around was not going to go anywhere and I as I pictured my very young career fading away I ran to the phone. I called the deans and told them. They asked who the student was and that they were on their way. By the time I got off the phone the student ran out of the class room with his bag. He ran to his mentor and Assistant Principal Denise Diacomanolis. I know this, because that is who I called next. “He’s here. I’m taking care of it.” was her response.

The dean and I checked the many drawers of the room and found no glass or bottle, but the smell of whiskey was still in the air.

What happened next will resonate throughout the rest of my career and became a running joke in the school among the staff. The student walks back in without his schoolbag, but a bag of Dunkin Donuts instead and he was munching away. It was at that very moment that I received my first foul taste of how the education system had drastically changed. He went to sit with his friend as the class was laughing at the whole incident. I went to the phone and called the Assistant Principal. “Oh he was just joking! It was apple juice.” she replied. I put the phone back and the bell rang. The school day was over and I had lost much respect for the system at that point.

I remember walking the hallways before parents came in that day. I came across another teacher. She looked at me and asked if I am OK since I looked like a zombie. I also remember using the word “befuddled” for the first time in my life. I told her what happened and she shook her head. Obviously she was used to this type of behavior going undisciplined. “I ambefuddled. I don’t even know if that is the right use of the word.” I said. “I think it’s the perfect use of the word.” she replied.

That was the end of that story. Like I said, it would resurface every now and then, especially in the staff lounge. Even in 2011, as the school was labeled “School Gone Wild” by the NY Post, I remember the UFT Chapter Leader saying “Maybe we should give all the kids Dunkin Donuts.”

I emailed the following to Principal Linda Hill:

“My second month at Dreyfus, ____ _____ did a shot of alcoholin my classroom. It smelled like whiskey and was in a shot glass. I called _____ ______ and Ms. D and I wrote it up. Nothing happened whatsoever. In fact he was right back in my class after 10minutes. I knew at that very point what I was dealing with back in 2007. What am I supposed to think”

“You definitely seemed concerned with the discipline in our school. It is easy to stand by the sidelines and gripe – the wiser choice would to be part of the solution, at least that is what I believe. [NOTE: I later became a union delegate and SLT member] You now have a child, a child that will go to many schools in his lifetime. Envision how you would like the teachers that Alexander will encounter to deal with educating and disciplining him.” “Frankly I don’t remember the incident with about ____ ____, but even if he did take a “shot”, what would you like to have seen happen to him If a parent could not be contacted he would have been sent back to class after a guidance intervention.”

Good question. With all these back and forth allegations now, I kept hearing Principal Linda Hill saying she is a mandated reporter and must report things even if she doesn’t believe them to be true. Apparently not this one against an AP she brought in with her from Pershing Middle School.

“But Mr. Portelos, maybe the kid was just joking and it was apple juice…”

Well hmmm. Not too long ago I was on Facebook. One of the many “People You May Know” suggestions popped up and I recognized the face and the name. It was that student I had six years ago. I didn’t click “add friend“, but I did message him. The reason was two fold. One to sincerely see how he was doing. I always want to know how my students are doing after they leave. Second reason was to finally close that case. 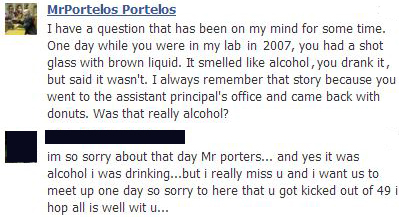 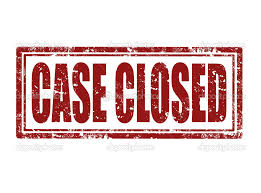