Throwback Thursday – Two Months Before it Got Ugly

For those not up to date on the lingo, TBT or Throw Back Thursday is in reference to the act of posting pictures or sharing memories from the past. It’s becoming an increasingly popular term and I thought to throw one out there. Maybe I will do it weekly.

The NYC Dept of Sanitation even used the term today: 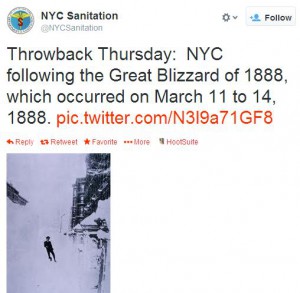 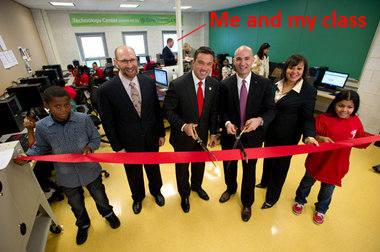 At the ribbon-cutting ceremony at the Gerard Carter Community Center are, from the left, an unidentified Dreyfus Intermediate School student; David Sorkin, executive director of the JCC; Rep. Michael G. Grimm; Bobby Amirshahi, vice president of communications for Time Warner Cable; Commissioner Jeanne B. Mullgrav, Department of Youth and Community Development, and another student from Dreyfus Intermediate School. (Photo Courtesy of Shahar Azran)

STATEN ISLAND, N.Y. –STAPLETON– The newest addition to the Gerard Carter Community Center is a state-of-the-art technology center that will serve children, teens and adults in the Stapleton neighborhood.

The technology center, consisting of some two-dozen, spanking-new desktop computers a mix of both Dell PCs that run Microsoft Windows, and Apple MACs was unveiled Monday during a ribbon-cutting ceremony.

The center is sponsored by and powered through Time Warner Cable. On hand for the ceremony wasRep. Michael Grimm(R-Staten Island/Brooklyn) andJeanne B. Mullgrav,commissioner of the city’s Department of Youth and Community Development (DYCD), along withDavid Sorkin, executive director of the Jewish Community Center (JCC).

Ms. Mullgrav said the state-of-the-art facility serves as a “vital resource to residents in the community.”

“When we’re talking about our young people, one thing is abundently clear having access to technology is a critical component of making sure they can compete in the 21st century econonomy. Opening the doors to this center will literally open the door to opportunity for hundreds of area residents,” she said.

The computers will be heavily used by students at nearby Dreyfus Intermediate School who attend the after-school program at the Carter Center sponsored by the JCC.

Guests at the ribbon-cutting were impressed by the work of Dreyfus sixth-graders in teacherFrancesco Portelos‘ science, technology and mathematics classes (STEM). The 11- and 12-year-olds demonstrated how to read a bar graph and create a spread sheet using data and information from the graph.

Poretelos said he puts all his lessons and assignments online so that his students can access the information at any time. “With computer technology like this, we can take lessons beyond the four walls of a classroom, so students will be able to come here and access their assignments and go over lessons online after school or anytime,” he said.

Eleven-year-oldDesi Kportufe, a sixth-grader, said he intends to walk to the center after school to complete his assignments. He was working on a spread sheet displaying “inventory” for “Desi’s Sneaker Store.”

His classmate,Rabekka Martinez, was doing the same across the room. She said she also plans to use the center after school to complete her assignments and do research.

Grimm called the tech center a “gorgeous facility” and said it will give students an edge in math and science.

“A center like this gives students the edge to compete in the 21st century, and it gives them a safe environment to come to as well,” he said.

The tech center will be open Monday through Friday from 2 to 6 p.m. for students from 5- to 12-years-old, and from 6 to 10 p.m. weekdays for teens and adults. The tech center will also be open Saturdays from 10 a.m. to 5 p.m. Adult and senior workshops are being planned, including a workshop on how to write and prepare a resume online.

The Carter Community Center, which opened in April, is named after slain Police Officer Gerard Carter, who died in 1998 after he was shot in the head while on patrol in the neighborhood. The center is located at 230 Broad St., in the Stapleton Houses.

Sometimes I have to pat myself on the back (…in order to check for knives.)

Next DTOE event is tentatively planned for April 7, 2014. Possibly in Brooklyn.

SCI informed me that they unsubstantiated yet another investigation initiated against me. I think the 28th in total.