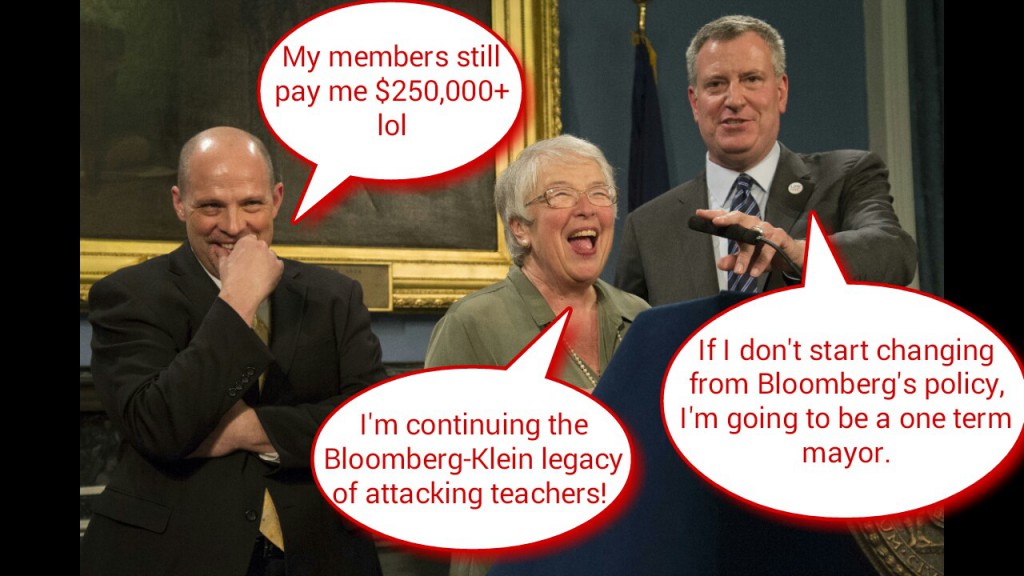 After years of working under an expired contract, United Federation of Teachers finally have a new one. Now we can argue whetheror not we should have voted for it, but it’s here and we would liketo believe that it means something and most importantly it is adhered to.

But what if it’s not

What if a principal comes in to your class and says, “I don’t like the way you arrange your desks. I’m writing you up and you will be disciplined and poorly rated.”

Thankfully, there is a procedure in place that allows for members to grieve alleged violations of theContract. I’ll tell you that in my experience it is worse than a “kangaroo court” though. The previous administration wiped their feet with our UFT contract and Chancellor Faria and her subordinates do the same.

Solidarity Caucus of theUFT has merged thefull contract together and made it more available for UFT members. We took the 2007-2009 and embedded the ratified portions.

We also have a copy of DTOE’s Grievance procedures and form here:

You can file a Step 1 grievance on your own or through your chapter leader. Step 1 is usuallyaddressed toyour principal. They will usually deny it asthere will be no accountability not to. I don’t know of any CSA union administrator that is concerned about the UFT knocking on their door.

Then you will go to Step 2 where you can go to meet the chancellor’s representatives and plead your case at 49-51 Chambers Street in Manhattan. You can have stacks of documentation and even video evidence of theviolation, but it does not matter. The DOE Office of Labor Relation will wait as long as they can and deny you your grievance again. I remember Michael Mulgrew told us that under Bloomberg, Step 2 grievances were denied at a rate of 98%. Not bad for engaging infair labor practices.We are told thatrate has not changed in the last 11 months under Mayor de Blasio and Chancellor Faria. Why should it changewhen the new administration has kept all the old Bloomberg-Klein lawyers and directorsNYC Education Bureaucracy Gone Wild– Diane Ravitch

If the UFT Grievance Department chooses, they will take your case to an arbitration where independent arbitrators will hear your case months, or a year, later. The whole time your rights are still being violated and perhaps affecting the education of students. There is also a chance that your UFT Borough office will not move forward as there are only 175-200 arbitration sessions allowed in one year.

I have gone to this Step 2 kangaroo court many times. The chancellor’s representatives have lied. The administrator’s representatives, that represent theprincipal or superintendent, havelied and sometimes they switch places and tag team. I’m not kidding. They all work together and share cubicle space. Why would they disagree with each other, when they are colleagues. One day the chancellor’s Rep can be Gary Laveman with Pedro Crespo as the principal’s rep and another day the swap.

Yes, SCI recommended he be terminated, but in the DOE, when you are an administrator, the only way to fall is up! Instead he was banishedto the 6th Floor of 49-51, being paidand ordered to continue ignoring contract articles.

Marcel Kshensky is another rep who wallows back and forth between hearing rooms and his OLR office. I had several hearings with him and no matter what the evidence, my grievanceis denied every time. Again, the students get hurt the most and this should be theconcern of theparents.

Of course all of theabove can just blame their bosses David Brodsky and Karen Solimando and actually have done just that. I have heard that Marcel would say “Let me see what Karen decides.” I once invited David Brodsky to my hearing but he did not show.

In any case I went to a hearing because I was made an ATR and not placed back in my school after my hearing. This decision predates any new contract that states otherwise.

Listen carefully as Marcel Kshensky asks “Where is that written” about ATRs and 3020-a hearings When my rep states it’s “notin the contract,” Marcel responds”Right, but it doesn’t prohibit it.”

He is basically saying if thecontract doesn’t say the DOE can’t do something, then therefore it can.

Anyone….I repeat anyone….can become an ATR and be stripped from their school based on this decision. 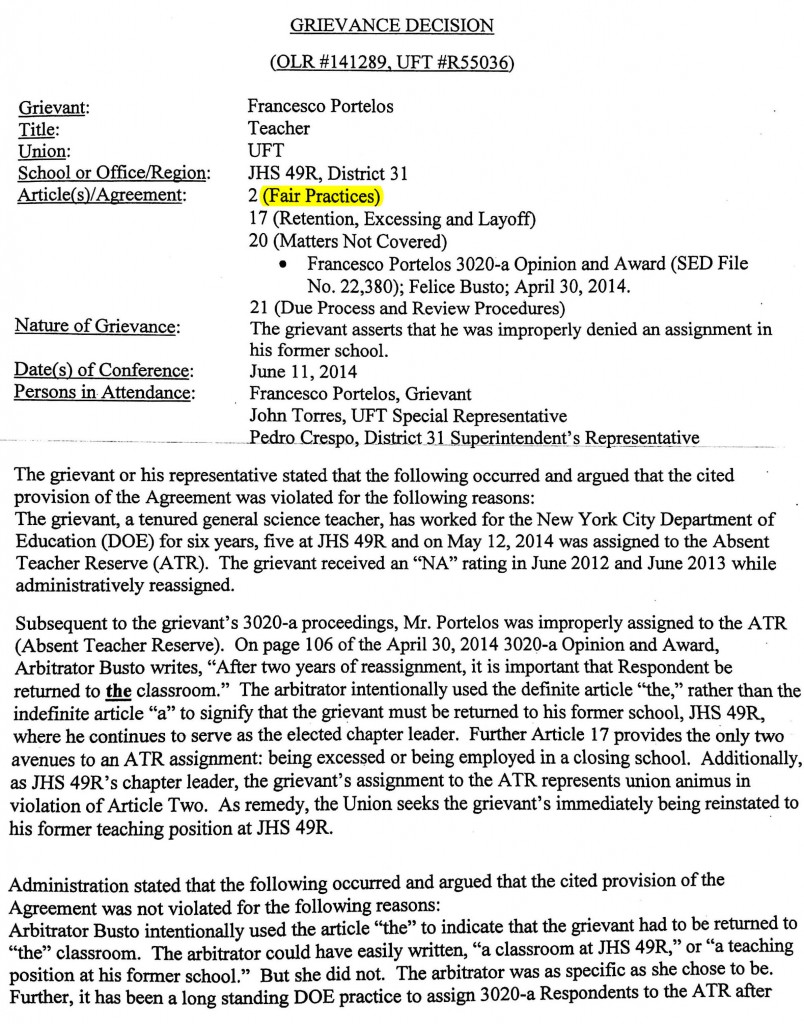 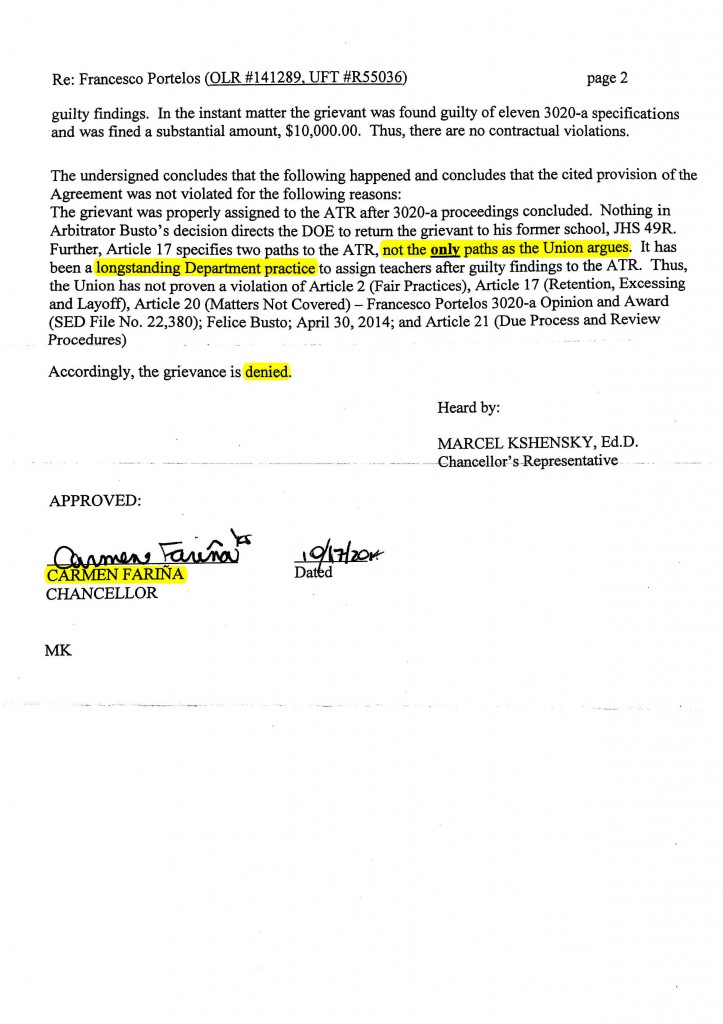