Some who have been helped by this site wanted to donate to $10,000 fine

I know that according to themany comments and messages I received, this site has helped many fight their battles like other sites have helped me. Having said that, many have offered to donate for the fine. My familyand Iappreciate thegesture greatly.

Because of the comments below, we have opened a donation link.

“You should also set up a paypal for donations.”

“Meanwhile Francesco, you need a piece leading into the request for donations that explains what you did as a protector of children.”

“…if going back to court to fight paying this fine is what it takes, Iwilldonate.”

“I hope that you will consider letting your peers, friends and supporters raise the money to pay your fine. You have paid enough already. I would be proud if you would let me help to organize such an effort in your behalf. As someone who experienced one-tenth what you have I would consider it a great honor if you would let me help to lay the basis for allowing your friends to show you their respect and admiration.”

I am appealing it, but who knows where it will lead and if it gets overturned. In the meantime, the DOE did not hesitate to start taking out the funds. In addition to losing out on the extra money I was obtaining while working the after-school programs, I was sent twenty miles and two boroughs away for over a year, plus legal fees and a plethora of other costs like raising two children and mortgage.

I am being really humble here and pasting this link created for donations. Please do not feel obligated. Many told me that they would be honored to be a small part of this fight, so here it is. Thank you all for your support both morally and financially. 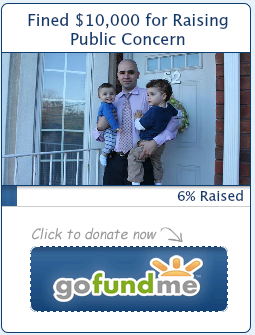