The Rise of UFT Solidarity- Rallies, Advocacy, Support and More

There is a group of educators in NYC like no other.It advocates for UFT members better than the UFT itself.It educates members and arms them with tools as well as stands with those under attack from the school administration, to the DOE headquarters to Albany. The list of issues educators in NYC face is lengthy and eclectic as is the range of members enlisting in this group. When this group meets in person, emails or has video conferences, it discusses matters no other group does. From Paperwork Reduction initiatives, to rallying shoulder to shoulder with members of an embattled school community. From representing and supporting the many the UFT leadership has discardedto learning from the retirees who have fought for our rights foryears. The group I am talking about is the 9 month old UFT Solidarity. New to the UFT political playing field, we bring energy, fearlessness, character, focus and drive.

Our mission is simple:

We are good at what we do given the resources we have. Today we helped a harassed teacher advocate avoid a disciplinary letter by simply telling the principal she was going to record the meeting. Next week we rally against Superintendent Aimiee Horowitz and Principal Neil Ganesh of Richmond Hill High School in Queens. Last month we rallied with another UFT group, New Action, to bring awareness to the 1,550 nontenured educators quietly terminated while the UFT leadership just watches.Make no mistake, the UFT leadership is as corrupt as the DOE itself and for that reason the UFT members contact us when they get no help from their localreps. Wenow even have evidence that UFT district office reps have been takinginformation sent to them by members and sending it straight to the DOE attorneys. More on that soon. Corruption!

Like I shared before, the list of issues is multifaceted and does not only revolve aroundtesting, co-locationsand social justice. For this reason, members of another UFT group that focuses mostlyontesting, co-locationsand social justicecome to us. When their school colleagues are in trouble, they send them to UFT Solidarity.When UFT members contact us, we do not care what race they are, what race their administrators are or the racial demographics of their school community. We simply say “Is there something wrong here Is it something hurting educators and students Let’s fix it.”

Ifeelproud to be part of the creationof UFT Solidarity and to watch it grow stronger. Unfortunately, but to be expected, there are critics out there. Surely a group fighting corruption and bullying in a fascist-like arena like the DOE and UFT is going to have critics and adversaries. It’s just sad that it comes from people like Francis Lewis High School Chapter Leader Arthur Goldstein and blogger Norm Scott. Two people I used to look up to and learn from during my three year fight. “…but wasn’t Norm a supporter, blogged about your fight and came to your termination hearings” my wife asked me recently. Apparently, the theory going around is that both got a little twisted that American Federation of Teachers President Randi Weingarten asked me out to lunch last August. So now they fabricated and spread rumors that “Portelos created UFT Solidarity as a plan byRandi to divide the opposition against current UFT Leadership- the Unity Caucus.” I even sent a tweet out to Randi once to please take them out to lunch too and I would pay for it if it would stop their high school whining. “Why did she ask you out”

In any case, as harassment, corruption and bullying was rampant, I looked around and there was no UFT group like UFT Solidarity, so I created one. In fact, during lunch at IS 34 in Staten Island, I bought the website name and created the logo- a person with people standing behind themin solidarity. I did this right in the building of Principal John Boyle, a bully himself. So the birthplace of UFT Solidarity was actually IS 34 right after Principal John Boyle gave me an unsatisfactoryrating for teaching Italian…a language I do not speak. 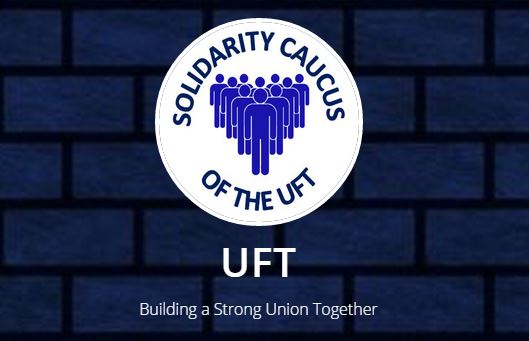 I haven’t blogging on this site much as I have been working with this growing group of teachers, guidance counselors, social workers, ATRs, retirees, substitutes and discontinued teachers. Brick by brick we will build despite all obstacles. The number of educators who reach out for help is growing exponentially and only a joint force can help battle all the issues.

It’s also great that there are other heavy hitters out there like David Rosen Garcia. David Rosen Garcia is a dean that advocated for equitable funding for sports teams in small schools. He has since created an army of advocates and has paid the price. In March he was reassigned to an office, but continues to fight and expose. Last week he called me on a trip to Staten Island. He came by and we chatted in my backyard about the issues we face as educators wanting to do the right thing. He is a hero and we need more like him. I try to educate him on who is really behind is reassignment and how to combat the lawyers hiding behind the curtains and computers. His students are learning more than just fighting for sports funding. Read more here.

Past and present UFT members can join us by clicking here: uftsolidarity.org/membership(no dues) or you can attend our General Meeting in Manhattan tomorrow May 29th at 68 Avenue C from 5 to 7PM.

Members in need of assistance can also call646-8UFT-4USor email help@uftsolidarity.org

We do have our first version of our member support app on the Google Play store as well.Teacher Support App