The Docile Educator vs The Badass One

Shhhh…quiet. We are in the habitat and age of the Docile Educator.

Wait, before we get into the Docile Educator, let’s talk about what scientists have discovered about frogs. Scientists say that if you take a pot of boiling water and throw a live frog into it, it will jump right out. Don’t try this at home. However, if you take a pot of room temperature water, place the frog in and slowly, but surely, increase the temperature, the frog will sit and boil to death.

That’s a metaphor and I want to accent it with a picture I created as it pertains to the Docile Educator and the frog. 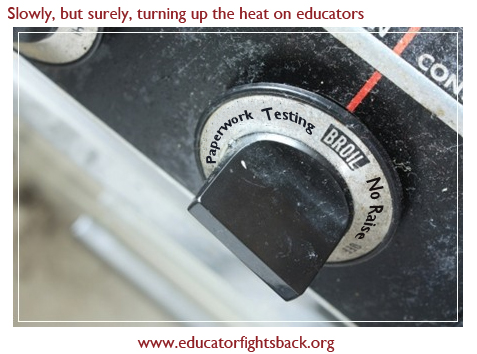 Back to the Docile Educator…

The Docile Educator is not necessarily a bad educator. When all the parameters are properly in place, they can do a pretty good job of conveying information to their students and even creating that “spark” that may last a lifetime. My hat is off to them.

The Docile Educator has a problem though. They are by naturedocileand therefore submissive. They won’t speak up to defend their students or careers. If you are an educator reading this and say “Hey! I defend my students!” then you are obviously not the species of educator I am describing. You are not a Docile Educator.

The Docile Educator will look the other way when a child is losing out on special and necessary services or being handled in an inappropriate way. They feel bad and may lose sleep at night, but shhhh…not a peep.

The Docile Educator will let their administrators punish them by making them line up to sign out at the end of the day like factory workers. Shhhh…the day is over, they are off the clock, but not a peep from the Docile Educator. They will wait their turn and pick up their children late. Principal Linda Hill made staff line up to sign out like factory workers and in violation of their contract. This went on for two months until the SI UFT Office and I stepped in.

The Docile Educator will teach to Common Core Learning Standards they do not believe in, but not sign a petition to oppose them.

The Docile Educator will change their entire set of lesson plans (that worked for years) because they were told to and…make not a peep about it.

The Docile Educator’s contract and rights will be violated again and again, but shhhh…..the Docile Educator will not grieve. They will not even ask for money they are owed for working extra during their prep periods.

Thankfully there is another species of educator in school buildings. The Badass Educator.

The Badass Educator is different. They may have once been docile, but then proclaimed “Enough is enough!” and “You will not treadon me any longer!” They may have said “Wait a minute…I’m an educator and am in the same career as Aristotle, Sophocles and Plato. Why am I treated like this I won’t stand for it!”

When I first thought of changing careers, I was walking on a chain link fence, inspecting the Verrazano Bridge. It was June 2005. There was intertwined metal preventing me from falling to the bay. It was a 150ft drop to my death. I thought “Teaching Sure I will lose out on a large chunk ofsalary, but I will be entering the most noble of professions.” My mind went to the picture below. I had seen it online and at a coworker’s office. Little did I know that just two months later I would be seeing it in real life on my honeymoon in Rome. Look at it. The “School of Athens” by the famous artist Raphael. It was painted back in a time when educators were highly respected and regarded. (Fun Fact: Raphael added himself sitting by that desk on the bottom left. He then redid his legs to make them look more muscular after seeing Michelangelo’s more muscular Creation of Adam.)

Raphael’s “School of Athens”. When educators were respected.

The Badass Educator is a good or great teacher. Usually, people who are really bad at their jobs do not make a lot of noise and instead try to fly under the radar. The Badass Educator will speak out even if they do it alone. They know that their job is more than a paycheck. WE ARE EDUCATORS! Our jobs are more important than putting food on a table. Don’t let anyone take that away from you! Anyone…not a parent, not a principal, not a superintendent, chancellor or mayor.

The Badass Educator will not only look out for themselves and their own students, but they will put out their neck for those of the Docile Educator as well. This career is too important not to.

The Badass Educator will not only speak up in school, but may also use social media to defend their rights and the rights of their students. So to compare, we have “not a peep” from the Docile Educator and “digital loudness” from the Badass Educator.

Education is under heavy attack. The system is broken and is putting obstacles in the way of all to break education. Be Badass fellow educators, because this docile mentality is not good for anyone. Be Badass, and defend your rights and the rights of your students. I and others will help in anyway we can.

BATs -Badass Teachers Associationalso on Facebook with over 30,000 members

Or contact me to help unleash your inner Badass. I used to be a Docile Educator. Sure I spoke up before I was tenured, but I was for the most part docile and lost many, many, many nights of sleep. I now sleep very well. I fight for something. I stand for something.

See also a bunch of Badass Educators, Badass Parents and Politicians who said “No More!” and successfully had a principal removed.

See you at to our co-sponsored forum on November 14th in Elmhurst,Queens. 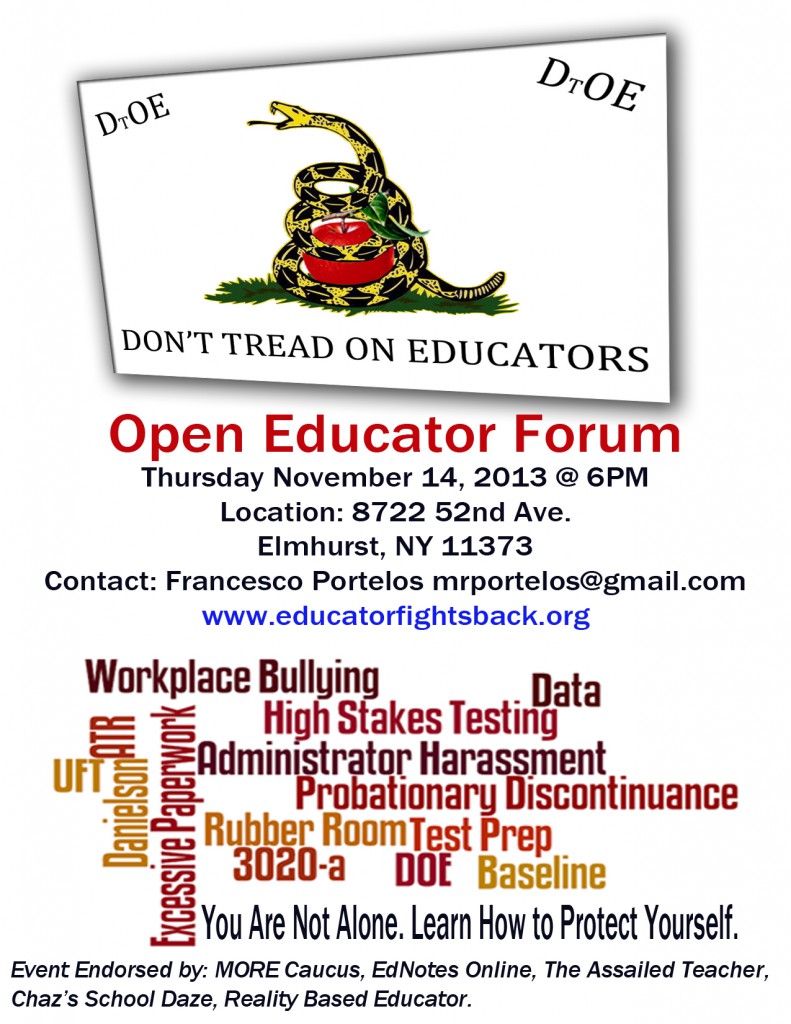