SCI Pt 2- A Tale of Two Videos is segment two of EducatorFightsBack.org’s SCI Series. Part 1 was “The Special Commissioner of Investigations Hand is in the Pocket of the Chancellor”

If you read Part 1, then you know that SCI investigators have visited my father-in-law at his job during the summer and more recently visited my mother-in-law the day before my termination hearing started.

Well, apparently SCI Investigators Mr. Romano and Mr. Martucci are still going around visiting my family, including my wife today at her school. Strange, that they don’t visit me. I’m not sure why they break protocol and do not come hand me their cards. I don’t bite. Instead they call my attorney that is not assigned to those cases.

They were also at my school prior to visiting my wife’s school. I didn’t have their number, but figured I can reach them by email and perhaps they receive it on their smartphone.

They are inquiring about a video that is on YouTube. What video This video belowcaptured of IS 49 Assistant Principal Denise Diacomanolis allegedly frisking a child. Apparently SCI wants to know who put it up on Youtube:

The kicker is that I am already being charged with the following for termination:

During the 2012-2013 school year, Respondent recorded a video in a school facility, namely, IS 49, of a student during school hours, without permission or authority.

On or about December 12, 2012, Respondent notified IS 49 Superintendent Erminia Claudio that he showed the video referenced in Specification 33 to parents, without permission or authority.

On or about December 3, 2012, at a Community Education Council Meeting, Respondent made disparaging comments about Assistant Principal Diacomanolis and/or discussed an ongoing confidential investigation regarding allegations that AP Diacomanolis had acted inappropriately with a student, despite the fact that he had already reported this conduct to Principal Hill and said allegation was under investigation by The Office of Special Commissioner of Investigation (SCI).

Did Laura Brantley, Director of ATU, realize “Crap, we have 38 specs, but no proof.”

Did you find the video disturbing or inappropriate This is what SCI Investigator Barry Lattig thought of the video. (By the way I believe he is my neighbor in Rosebank, Staten Island. Maybe we’ll have a beer at Danny Blaine’s) 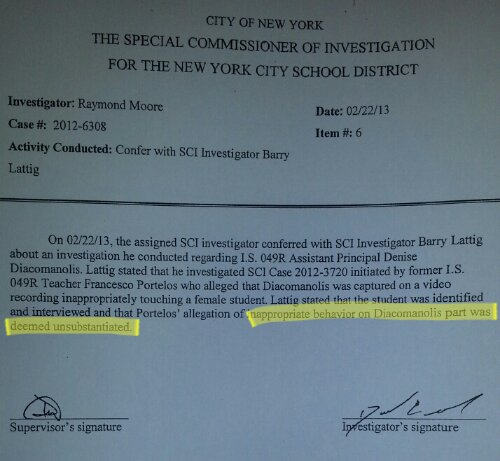 So SCI believe that the girl’s zipper was stuck and the AP was merely helping here. A careful review and pause of the video will show that the girl (whose identity was purposelymodified in face and voice (FERPA)) was wearing a sleeveless shirt. Not too mention if you have your audio on you will hear her scream “Ms. Deeeeeee!” as she keels over at 23 seconds.

No worries though. Richard Condon and his crew were on it. They interviewed me and others and deemed it appropriate, so everyone sleep tight. I don’t have to tell you what would happen if a teacher helped a student with a zipper, do I

Why record it Would anyone have believed it if I didn’t According to veteran staff in the building…”Nothing will happen Portelos. We have reported her before and nothing!” This isn’t the first allegation.

“Did you send it to parents Mr. Portelos” I did, because I thought maybe it’s just me. Here were some responses:

I justviewedthe video and it was very disturbing. I can’tbelievethis has happen and nothing has been done about it. Thank you for the info, have a great day.

Ok watched it. Who is that disgusting, inappropriately-attired thing touching that child If that was one of mine, all hell would break out.

Someone needs to submit those allegations to childrens services, the investigator generals office (NOT the school IG, the NYC IG) and send that video to the press. THAT will make the DOE react

If that was my kid, that woman would have no hands left. AND why is she allowed to dress that way for work She looks like a hooker!

“Mr. Portelos, why did you name this post A Tale of Two Videos Is there another”

You see since SCI deemed the act itself appropriate, they are coming at me with I “did not get anyone’s permission to record this video and now it’s on Youtube.” 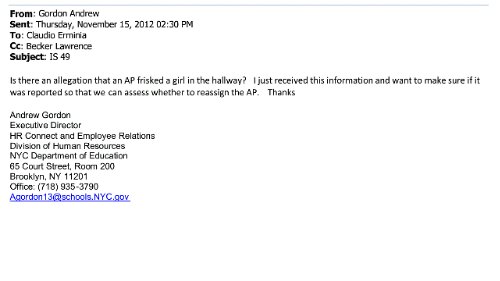 My question is why haven’t they questioned me about this other video that I recorded and is also on Youtube withhundreds of students. I did not get permission for that either. Wouldn’t this be a bigger violation

Stay tuned for more of SCI Series coming up followed by OSI Series.