This is Part 8 of the SCI Files.

[UPDATE: The Special Commissioner of Investigation Richard Condon’s office admits to my allegations that they tampered with evidence. See their memo appended at the end of this post.]

On February 28, 2012SCI investigators came to confiscate computers, while I was teaching a class, and then came to my house to take some more.

Imagine this hypothetical situation for a moment: Imagine you are an administrator of a school. You come to know that someone involved in your school has filed a complaint against you. Your only defense is offense, but how What if this “someone” has a clean record Worse yet, what if this someone has letters of praise and recommendations for an administrator program from you What if they haveover 70 emails where you are thanking them for their hard work Now what How do you get rid of this “someone”

Under the BloomKlein DOE the answer is simple; you pick up the phone and call DOE Legal. In the case of Principal Linda Hill of IS 49, she called Senior Field Counsel Marisol Vazquez Esq., who works under the supervision of Robin Singer Esq. and Robin Greenfield Esq. They in turn work under the supervision of top DOE attorney Courtenaye-Jackson-Chase Esq. They recommend the administrator call the NYC Special Commissioner of Investigation and open a complaint against the whistleblower. Build a paper trail even if it isn’t authentic.

You then work on a campaign to smear this problematic someone as much as possible until they are removed from your building. It doesn’t matter if the allegations are true or not as the investigative offices of SCI, OSI and OEO are on your side and will delay as much as possible. That is how former Mayor Michael Bloomberg and former Chancellor Joel Klein set it up. Principal Hill herself admitted that she did not make moves unless she cleared it with Marisol Vazquez, Esq. and “legal.”

Ok, now let’s move further from hypothetical and deeper into the corrupt reality that plagues our NYC Schools and theinvestigations.

In case you are new to this saga, here is a quick recap of what happened from the time I contacted SCI about financial misconduct to the time they came to confiscate my devices a month later:

–Thursday January 26, 2012 I contact SCI about allegations pertaining to financial misconduct I witnessed.
–Friday January 27, 2012 former Chapter Leader Richard Candia prevents me from speaking at UFT meeting, walks out as I continue to speak and emails me asking for my resignation while BCCing the administration in the email. I email the UFT members about his request and a few hours later Principal Hill disables my email account.
–Saturday January 28, 2012 I re-enable my account not knowing who had disabled it. (I happen to own the email system)
–Sunday January 29, 2012 I contact former Superintendent Erminia Claudio to help mediate. She calls my house and assures me she will speak with Principal Hill.
–Monday January 30, 2012 After speaking with Superintendent Claudio, Principal Hill, with the assistance of former Chapter Leader Richard Candia and former School Leadership Susanne Abramowitz, initiated my first two disciplinary notices and called in the first three investigations (one was real estate). Yes, the first 5 negative items of my career were created all in one day. I guess DOE Legal forgot to mention “be discreet.”

Now that you have that background let’s go into the down and dirty.

You might imagine what life and the day to day was like for me at this point. My career was being derailed and I had more questions than I had answers. I couldn’t get ahead of the game that was being played, but I couldn’t allow myself to fall too far behind. I was documenting everything and anything.

It’s now the morning of February 10, 2012. Now keep in mind I had no idea I was under any investigation, but suspected something was coming. I did so because I spoke to a veteran teacher who told me step by step the playbook the DOE follows and what was going to happen. Anyway I sit down at my desktop, that ran my STEM Lab in room 229, and logged in. Nothing strange except when I tried to go onto the internet. I was blocked. Instead of my usual Google.com page I saw a NYC DOE Websense block come up. Websense is the program the DOE uses to block potentially inappropriate material from being accessed by students.

Here is a similar image of what appeared: 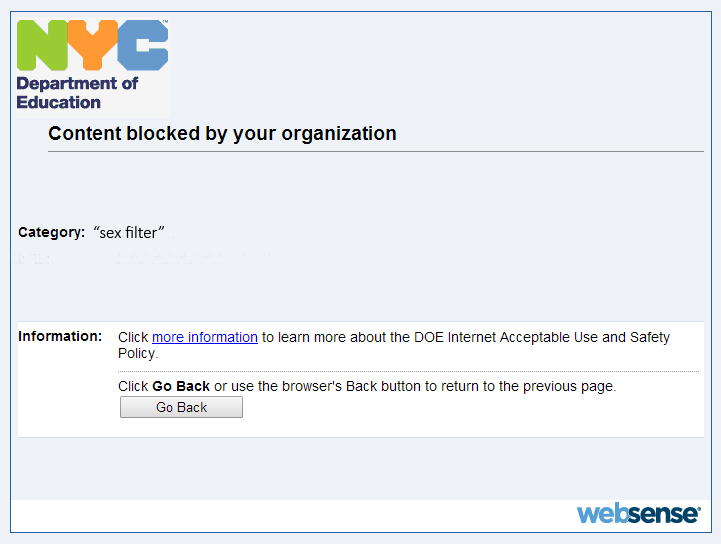 Category Sex Filter Sex Filter on my desktop computer at school Can you imagine what I was going through and what I felt like when I saw this pop up for the first time in 4 years “Oh no, no, no…I don’t think so. Nice try.” I thought to myself. I am not going to let them plant stuff on my computer. Sex filter Really I looked up the site that the browser was trying to access and wrote it down.

I then did what I do best…document. I submitted this tech ticket to document this bizarre sex site that miraculously appeared on my desktop. 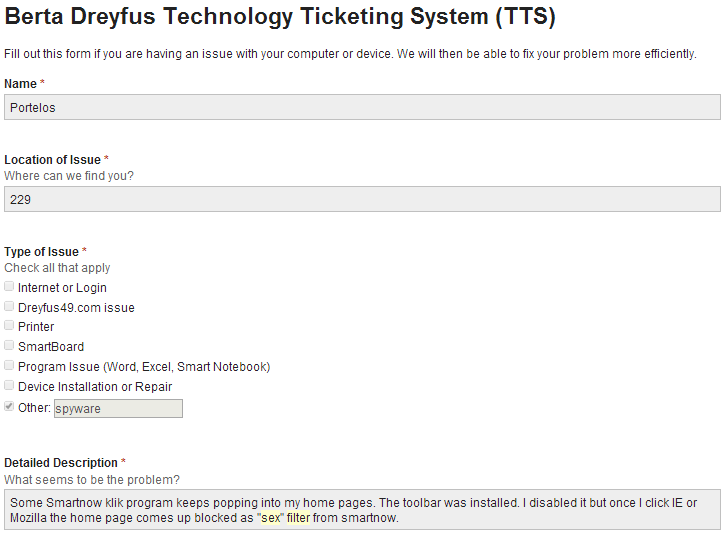 I wound up clearing out the issue that day and it never came back. However, later that day I was notified that I was being called in for a third disciplinary conference, the third in ten days. This post isn’t about that third letter, but just so you are aware, I did get a letter for staying 27 minutes too late. Did DOE Legal advise that as well

However, that sex filter is nothing compared to what happened next.

A few days later, on TuesdayFebruary 14, 2012, Superintendent Claudio accepted my request to have a mediation and invited me to her office. I attended with Principal Hill and my UFT District Rep Sean Rotkowitz. Nothing was cleared up at that meeting and matters actually became worse.

Now we are at Friday February 17, 2012. It was the Friday before a week long break for President’s Weekvacation. Right before I left school I did what I always do before a long break. I unplugged the power, internet cable and anything that ran from the students desktop to mine. I took all the wires and threw them on the row of student computers . I did that to clear the floor up, because the custodian, David, usually uses these long breaks to clean and polish the floors and the wires would get tangled.

Well here is where it became even more bizarre. I return to work on Monday February 27, 2012. My computer is not only plugged in, but it is running. Now just to bring you into my mindset at that time, my beautiful wife Angela informs me a few days earlier that we are expecting our second child. I have three letters in my file in ten days. I find sex filters on my computer and now my computer is plugged in over the break. I look in the admin console to see how long my computer was running for. It was turned on Friday February 24, 2012. So on Friday, during the vacation, someone went into my room and connected the wires and turned it on. That’s what the evidence shows.

Are you following so far

Now let’s bring the story to 11:00 am on Tuesday February 28, 2012. Two gentleman in suits appear at my classroom door while I was teaching class 730. I see them at the door with Assistant Principal Joanne Venier Aguirre. They were SCI investigators. I was nervous, but not surprised.

Within minutes they were in my room, denying me representation and confiscating….ready for this…the computer that was turned on during the break.Isn’t that interesting

Wait…it gets so much worse. They had a list with them that also listed “a Macbook and two iPads” that they also needed. The Macbook and one iPad I had left at home. The other iPad was no longer in my possession.

The two SCI investigators then came to my house and I gave them the DOE Macbook and iPad we were allowed to bring home.

Dirty Wait…there is more. At this point we can all agree about one fact here. February 28, 2012 was the last time I had access to those devices. To this day they have not been returned to the school.

The allegations stated thatinstead of teaching I was running a real estate business using my DOE devices. The truth is I held a real estate license an occasionally sold a house to friends and family who were looking for one.

“So what was on those devices Mr. Portelos What did expert SCI Forensic Specialist Richard Marin, SCI’s top tech guy, find“

According to theVague SCI Reportthat was published on April 25, 2013 (and shared with the media) and the 3020-a termination charges brought against me, they apparently found:

“Mr. Portelos!!! You were running a real estate business from your classroom and ran a successful STEM program How did you do it”

Was I Well here is where your head is going to explode.

UPDATE!: SCI ADMITTED THAT THE FILES WERE NOT FOUND ON MY COMPUTER’S HARD DRIVE! 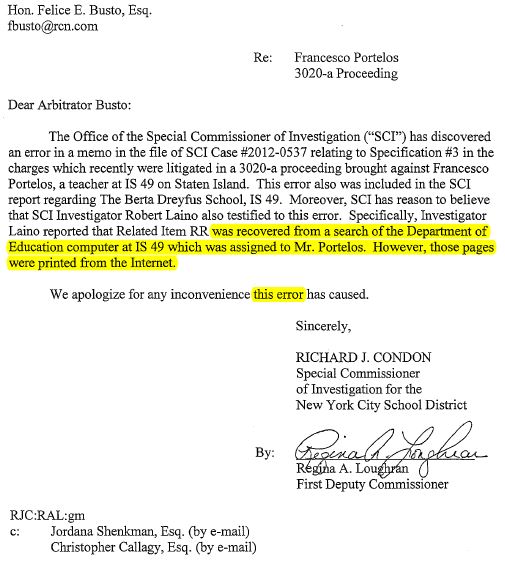 “Technology is my Turf”. I used to use my tech savvy knowledge to educate children. Now I use it to educate the public.