There has to be a professional and adult way of saying “Told you so!” Sit down and grab some popcorn again, because the craziness never ends here with this saga. I feel like I’m writing fiction or a John Grisham novel. I also felt as I was running low on material, but they keep giving me more!

Do you remember these headlines that came out after SCI published a vague report in April 2013 SCI stated that they found “real estate” related files on my desktop after former UFT Chapter Leader Richard Candia made up allegations about seeing me do real estate work while I had a class in session. Well, two years after SCI confiscated the desktop, it turns out theydid not find files on my computer! (Dun-dun-dun)

Laura Brantley esq., who is the director of the DOE’s Administrative Trials Unit (ATU), wasted no time in going for the termination. No, I’m serious…no time. The ink from the report was still drying on the 6th floor of Chamber Street when she sent the email below at 3:50 PM. The SCI Report came in at around 2 PM.

Pay attention to who was emailed and how DOE Legal holds the hand of the administrators when going after the teachers. Also, keep in mind that NYS Education Law 3020-a states that a school board must meet in executive session to determine if there is probable cause to bring a teacher up on charges. That obviously didn’t happen here. 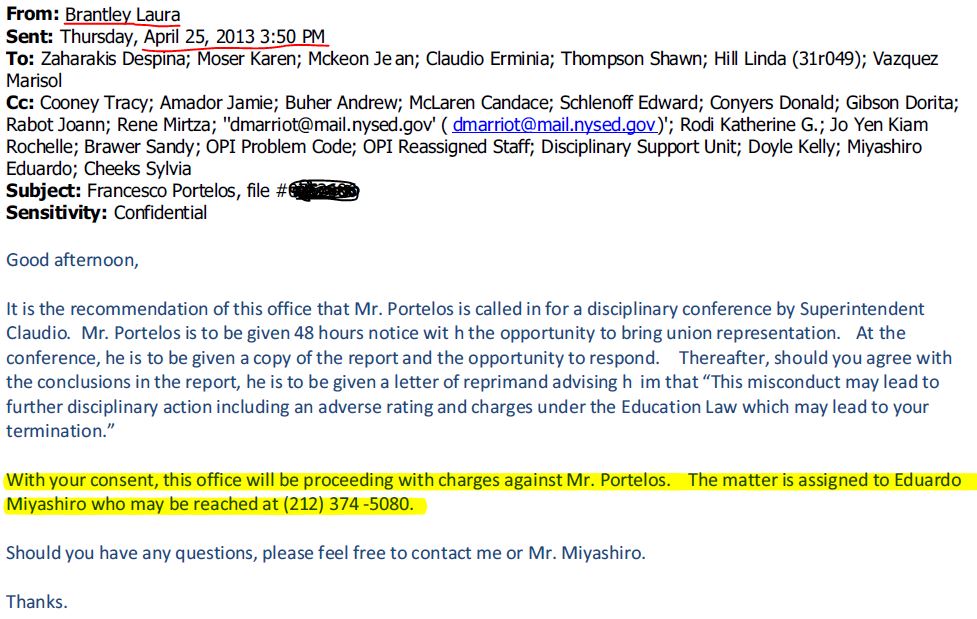 So what happened now What changed Well, on the two year anniversary (February 28, 2014) of the confiscation of my DOE devices, I wrote this post on how I believe files were planted,SCIPart 8 PlantingFilesand Confiscating Computers. In addition to that post being shared across various social media, I decided to send the post to Special Commissioner of Investigation Richard Condon as well. Almost as if saying “What’s up with this”

I would like the information contained within this post investigated. I feel as though someone, in possession of confiscated equipment, deliberately falsified information.

I did not know this, but while I was laying on a cold dirty jail cell floor (My 33 Hours Behind Bars), SCI sent the following memo stating there was an “error” in their investigation and they “apologize for any inconvenience this has caused“: 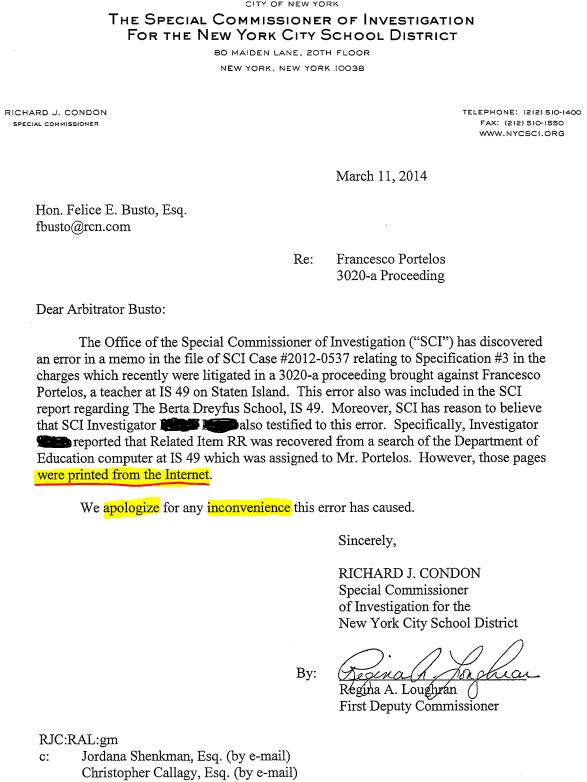 SCI admits to error in investigation.

What does this mean on a grander scale What does it mean when the office that is supposed to be investigating malfeasance is in turn guilty of it THIS IS BIG!!!!!

This is not the only time where I found evidence that was tampered with in my case though. Isn’t that right Mr. Richard Marin, SCI’s forensic expert The next in the SCI Files, SCI 10, will expose more deliberate tampering by SCI. Hey Mr. Condon, I’ll give you a hint…It has to do with this video:

The ATU office has decided to drop one of the 38 charges against me now. That was nice of them. We are expecting the arbitrator’s decision any day now.

Shall we continue this dance I think we shall…