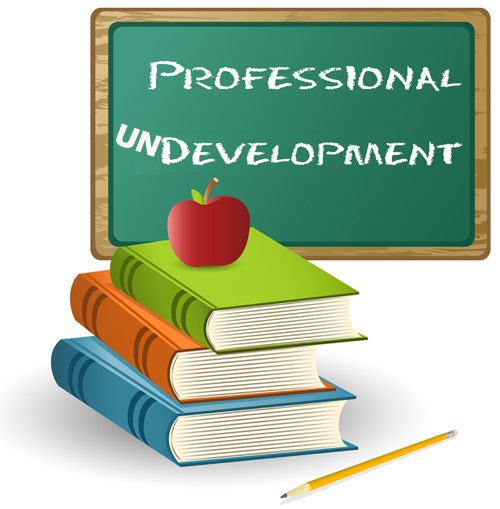 “We want the worst possible teachers in the classroom” – Said no one ever.

What I attempted to do, while in educator exile, is learn. Learn about law, physics, earth science, read up on other cases, read up on labor law and union contracts etc.

Want to hear what is even worse I have made several attempts to obtain access to any kind of professional development and was ….denied.

From:Francesco Portelos<fportelos@gmail.com>
Date: Mon, Sep 24, 2012 at 5:51 PM
Subject: Fwd: Special education workshop on Oct. 4 & 5
To: eclaudi@schools.nyc.gov, Shawn Thompson <sthomps@schools.nyc.gov>
Cc: Sean Rotkowitz <srotkowitz@uft.org>
Greetings Ms. Claudio and Ms. Thompson,
I would like to partake in this PD and need the OK from one of you. Thank you.
-Francesco Portelos
*Sent with Samsung Epic
— ———-
From: “Carmen Alvarez, VP for Special Education” <noreply@uft.org>
Date: Sep 24, 2012 2:36 PM
Subject: Special education workshop on Oct. 4 & 5
To: <mrportelos@gmail.com>
You are invited to a two-day special education workshop
The UFT, in collaboration with the UFT Teacher Center, is offering a series of Special Education Professional Development Institutes this year to support all school staff as the DOE implements special education reform in schools across the city.
Date: Thursday & Friday, Oct. 45
Time: 8:40 a.m. 3:00 p.m.
Location: UFT headquarters, 52 Broadway, 19th Floor
———

Wait, there is more….

I attempted to sit in on an iPad PD here in the conference room where I usually sit and was told to leave and sit in a cubicle alone and without anything. That is what they are doing here.

I was given the opportunity to sit in on an iPad training taking place across from room 308 2 weeks ago. I went up to find you but you were in a meeting. I asked Diane Ali “Would it be ok, since I finished the phone list” She responded, “It should be OK”. I sat in the training for about 2 hrs. It was beneficial to my professional development as well as to the instructors whom I helped troubleshoot network problems that halted training. You then came down and stated that I’m “not supposed to be in there” (training) since I was placed across the hall. I packed up my things and returned to my designated desk.

Last week you came down to my designated cubicle in room 308. You wanted to discuss a paper I was to fill out for HR. My laptop was on the desk and open. On the screen I had the official DOE website up. More specifically it contained information about the new Special Education reform I was reviewing. You stated something like “you can’t help yourself, can you” in reference to my persistent computer use. I responded that I’m following the guidelines you gave me and using the laptop in connection with my “DOE position”. You responded that my position is no longer a classroom teacher. You wanted me to put the laptop away and I did. I asked if “I’m not allowed to professionally develop myself”

I have been denied again and again from furthering my education. It’s not just me though. I hope you, the reader, are getting a better understanding of what the Rubber Rooms are really about.

Today we just had a new teacher come in. We are at about 16 in the building and at least 3 new inmates in the last week and a half.

Wake up public…something dirty is brewing and you are drinking it up.