I was called in to the Office of Special Investigation for a newinvestigation against me yesterday. It’s crazy.

I attended the OSI conference andI was told that on March 11, 2013 Principal Linda Hill made her 30th allegation on me. Principal Hill contacted SCI on March 11 about a blog post I made on January 8, 2013. Yes over three months later.

“Principal Hill made an allegation that Mr. Portelos posted on his blog how students can sneak weapons into school.” I’m paraphrasing, but it was something like that. Are you kidding me

Here is the post. They were referring to the part under the section called “Did You Know” Basically items I have been warning them about for months and they have ignored. Now the DOE is in a bit of Catch 22. If theyunsubstantiateI dodge another bullet (no pun intended). If the substantiate and find me guilty of this, then they continue to violate my first amendment right and discipline me for raising public concerns as a citizen. Your call.

By the way, the two gentleman from OSI were extremely professional. 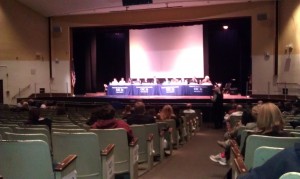 Last night I attended the Staten Island Community Education Council (CEC) for District 31. I raised some concerns at the December meeting and will probably be attending every monthly meeting. When I signed up, last week, to speak at this meeting, I had no idea about Resolution 76 – Proposal to hire retired and armed police officers to patrol our schools in plain clothes. I registered to speak to the council and not 100 concerned parents and community members. Every news station was there and I tried to speak on topic.

The next incident that occurs may not be from a stranger, but possibly someone who belongs in the school. That means the perp can walk right by school safety. What we need to work on is discipline and the proper education for these students. In March 2011, a student told his social studies teacher that he had a gun in his bag. The teacher followed protocol and called school safety agents. The student ran out of the class with his bag. The student was then cornered and out of rage punched a class door window, severely cutting up his arm. He, luckily, did not have a gun.

The staff at the school, that I represent, are texting, emailing and calling me to tell me how “out of control” things have become. One just wrote to me, “someone is going to get really hurt.” I hope they are wrong.