Final Report on Principal Hill is Published -Falls Short of Finding All Misconduct.

The other day I finally received the public version of thefinal report that found Principal Linda Hill of Berta Dreyfus IS 49 guilty of financial misconduct. Besides it being heavily redacted, it fell extremely short of finding all the malfeasance that took place at this troubled school. See the email I sent below to an eclectic range of people. Most of them have the power and authority toto do something. From politicians, auditors and attorney generals to DOE’s upper echelon, all have been made aware.Let’s see if Principal Hill will get away with it, a large bonus and residual pension inclusive of unearned money.

This month Intermediate School 49 Principal Linda Hill will be retiring and start collecting her pension. Her pension is calculated by taking the average of her salary inclusive of her overtime accrued. In addition, she will be collecting a substantial retro pay bonus of approximately $70,000 because of the agreement with the CSA union and NYC.
Principal Hill stole. She stole from me, she stole from all of you and most importantly she stole from our students and the community. The attached, and heavily redacted, final report falls very, very short of finding all the malfeasance that took place at the troubled middle school in Staten Island. I am no investigator, but comparing the information in the final report with a simple spreadsheet I created, from records I obtained, shows a great deficiency in the investigation.

For example:
– Investigator Lawrence Scott found that Principal Hill engaged in “double dipping” on 14 occasions, while in fact she engaged in this behavior at least 22 times.
– The report does not indicate that Principal Linda Hill was paid while out sick on November 2011, when in fact she was.
– The report does not indicate that instead of using a digital time clock, located just several feet from her office, Principal Linda Hill hand wrote her time in and out over 118 times.
-The investigation report also did not indicate the issue with the 3 hr time restraint for the program billed. Even though the Achieve Now Academy program required a 3 hr limit per day, Principal Linda Hill far exceeded that including in June 2011 when she was actually at a dinner having drinks and yes billed the tax payer.
-It also didn’t include the days she was billing the program on Saturdays and even after the last day of school.

What is worse is the high level of corruption and cover up by many upper level employees of the NYC Department of Education and investigative offices. From the chancellor’s office to the legal department.

I’ll contact each office copied here separately in an effort to bring justice. Principal Hill should be charged pursuant to NYS Ed Law 3020-a. She was already found guilty of larceny, defrauding the government and misdemeanor, yet still runs the school today.

Below is the spreadsheet I put together while in exile for even raising this concern. Notice the questionable billing. Much of it was not mentioned. The program was from Tuesday to Thursday for only three hours. 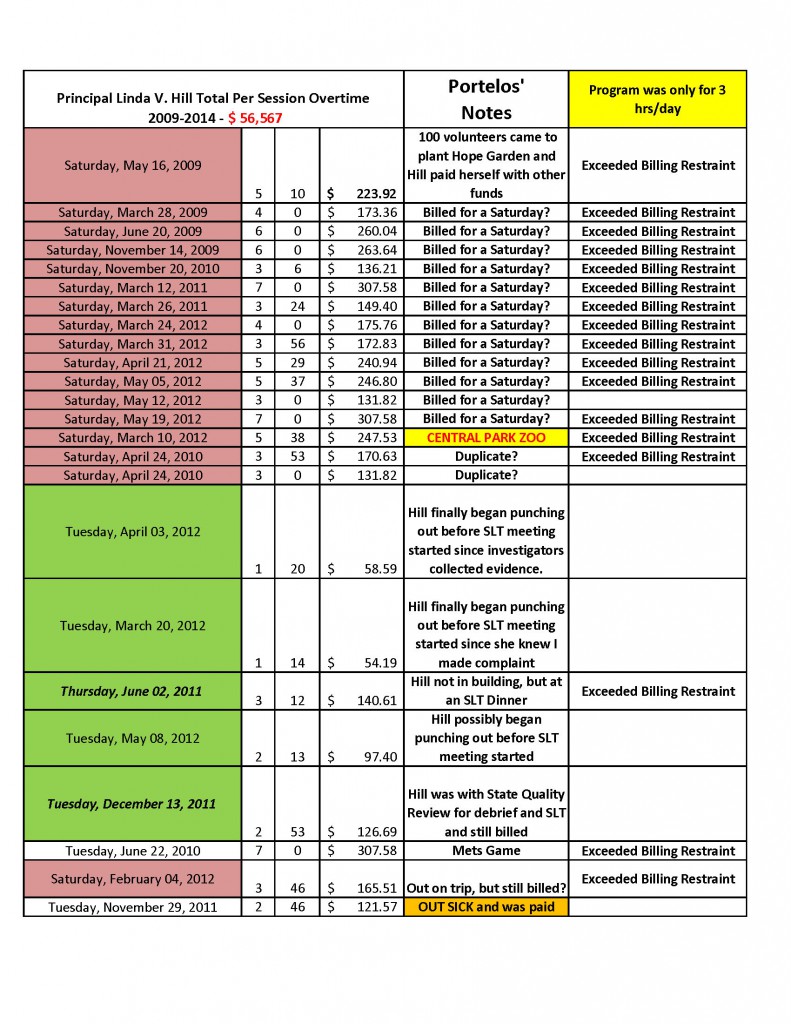 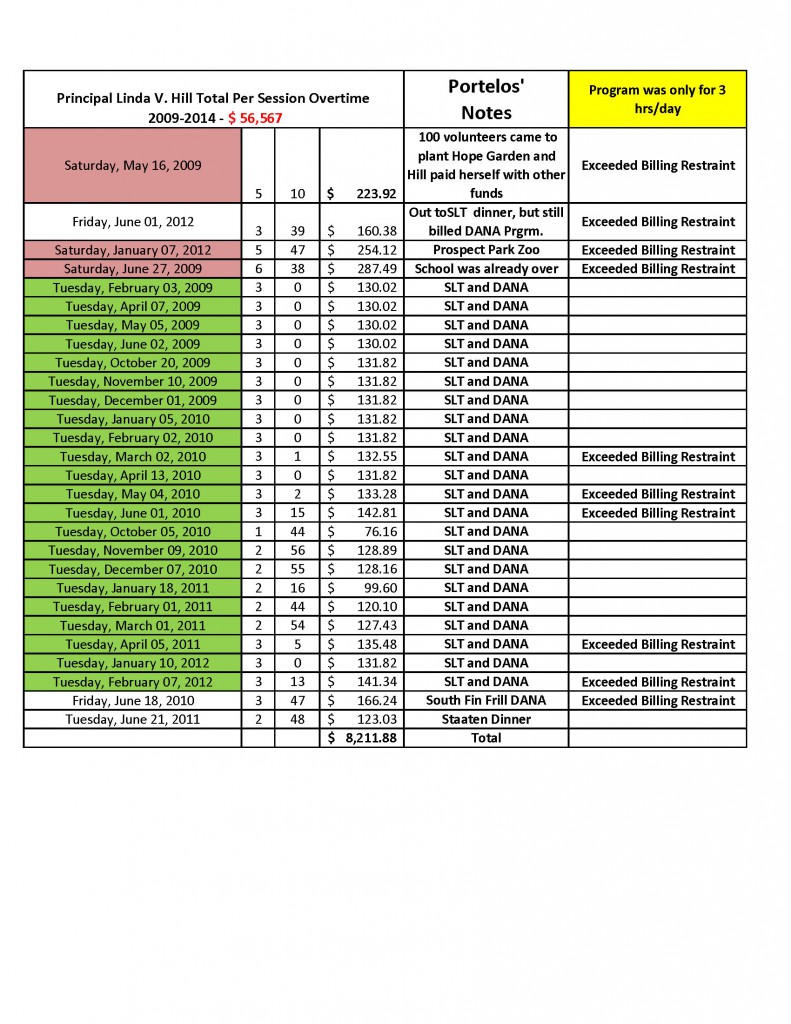 Here is thefinal public version of thereport. Among many other things, noticehow long this 900 day investigation took. Reported by me on January 26, 2012, then not mentioned here, but Principal Hill’s time cards were collected in March 2012, I was coincidentally removed from the school right after and then not questioned for over a year despite this website having posted all evidence needed in June 2012. 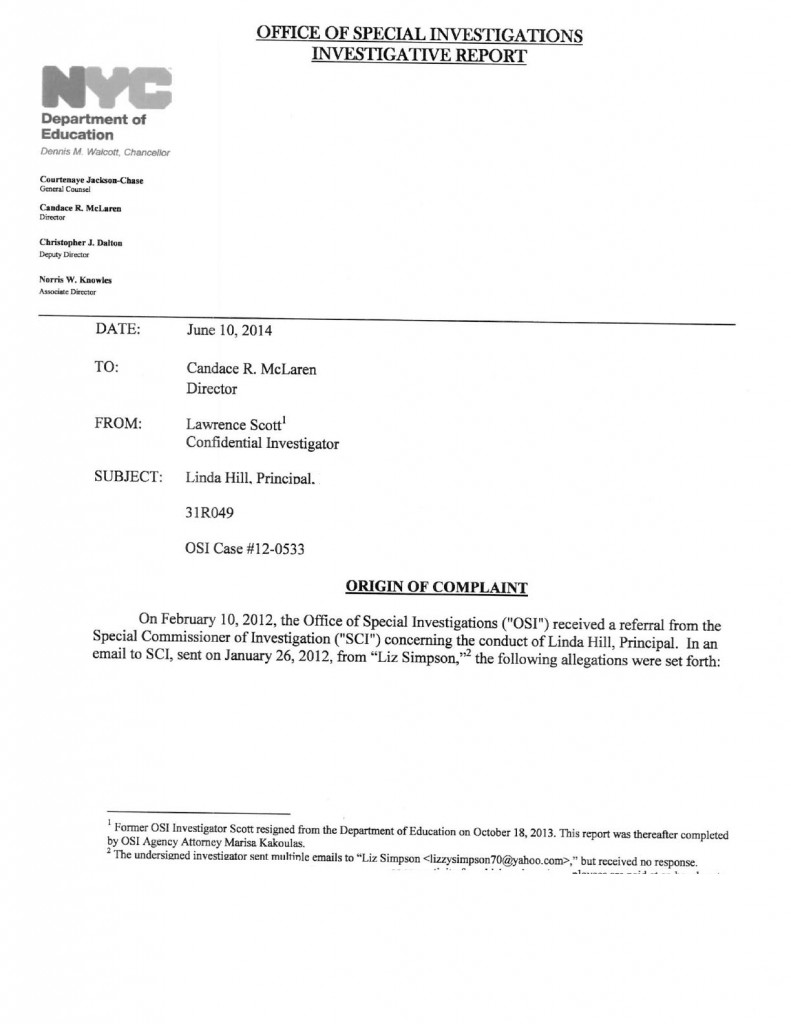 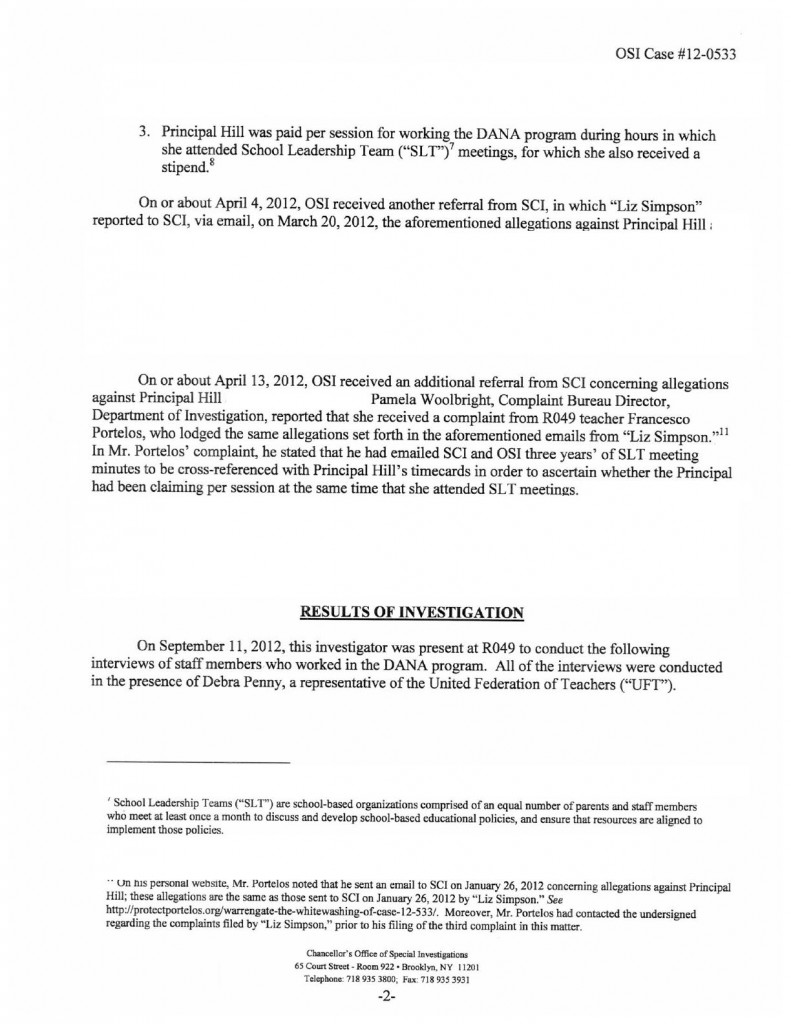 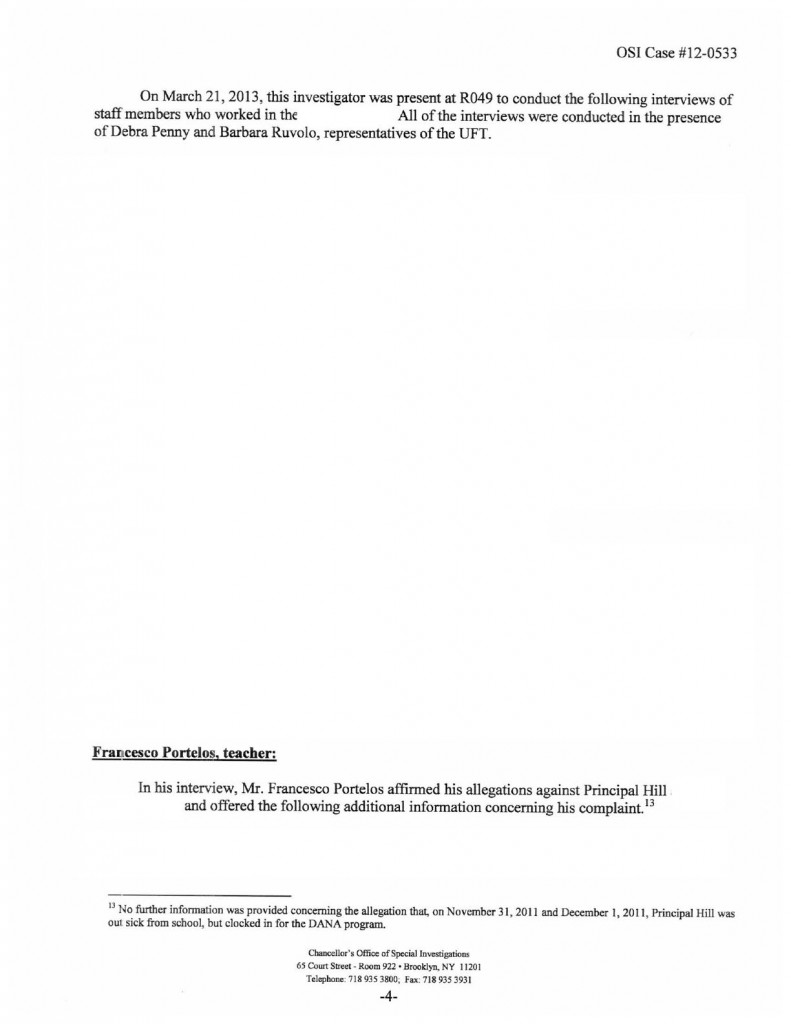 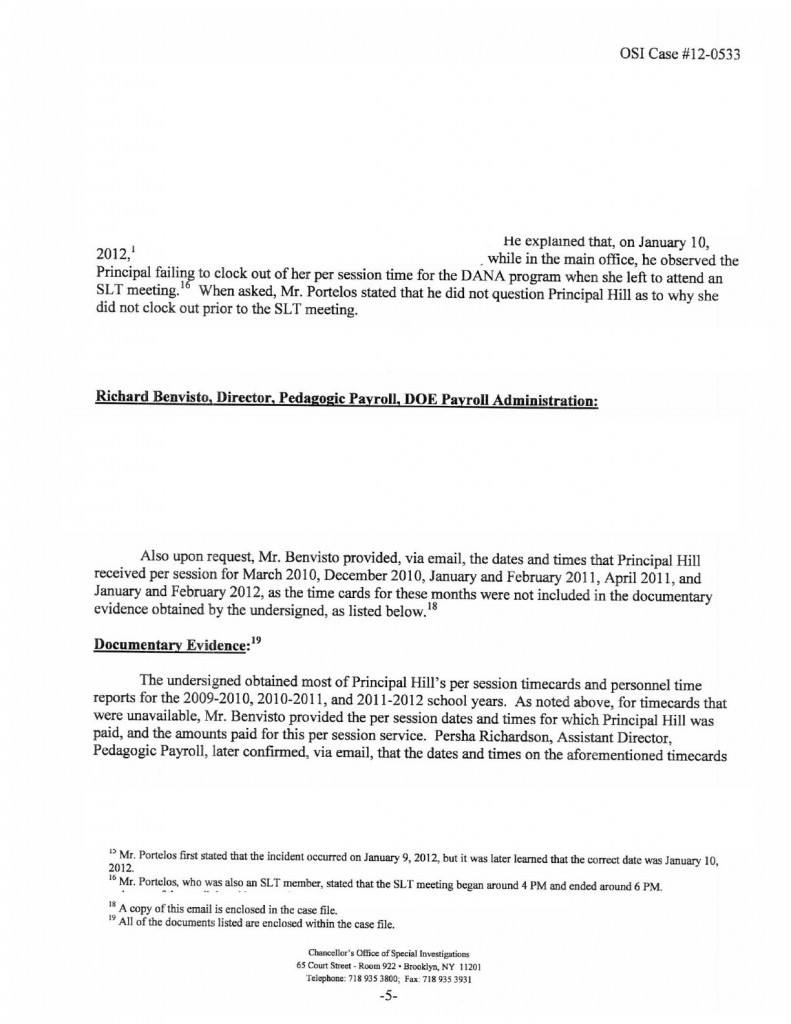 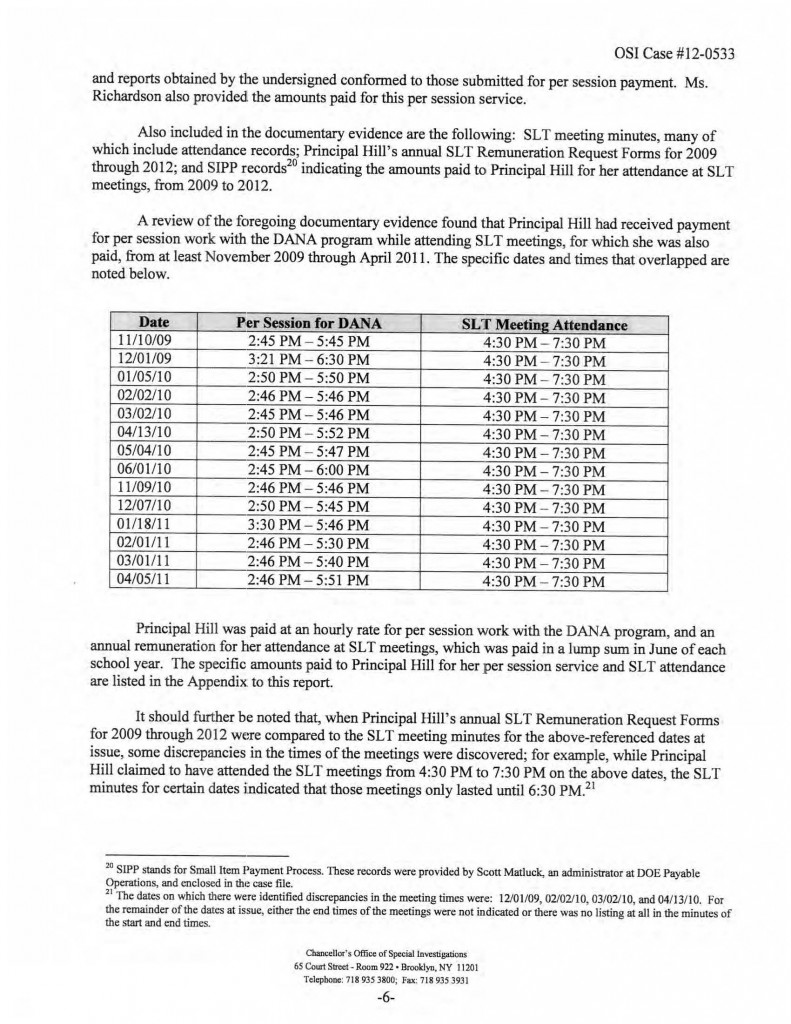 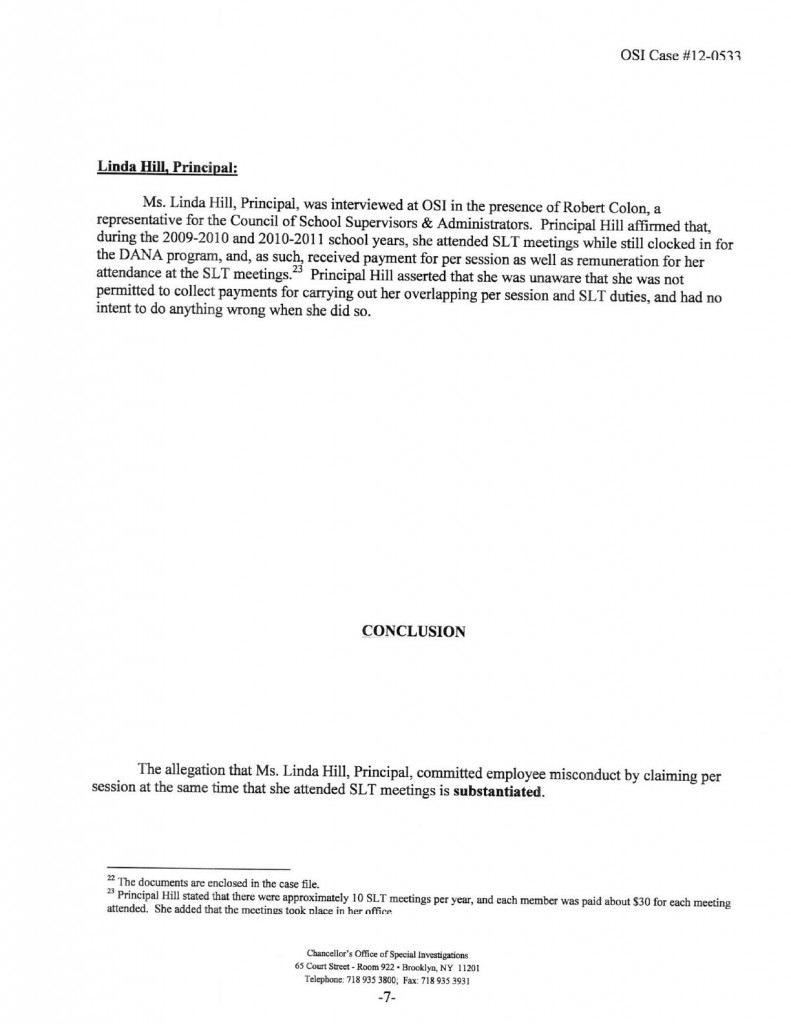 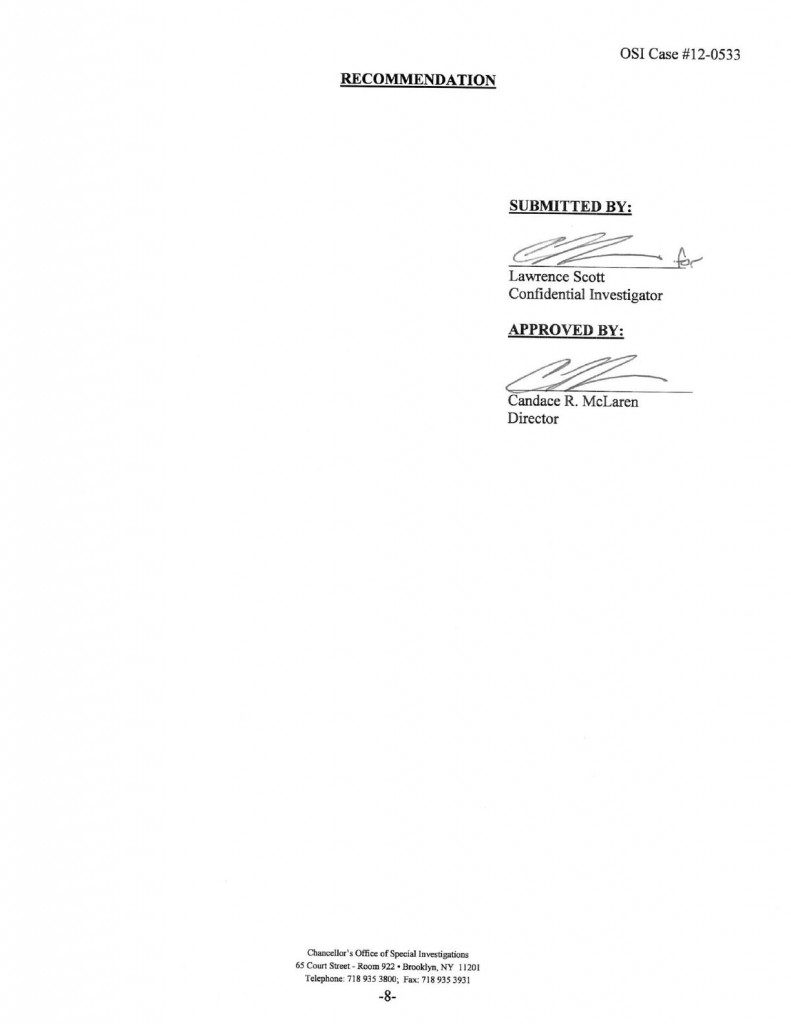 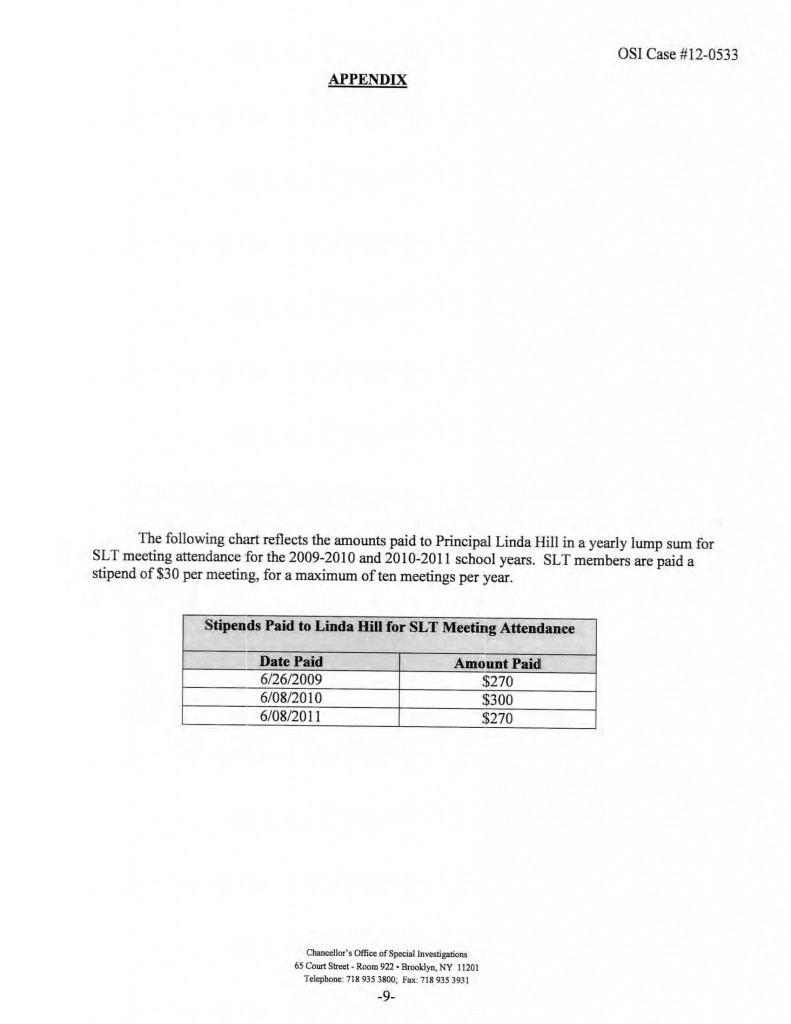 In the end she had to pay $801 in restitution. That’s it. The questionable money will continue to be deposited into her account as her pension.

Leave a comment below. Should we move forward with a rally before June is over No one steals from our students and community gets away with it! 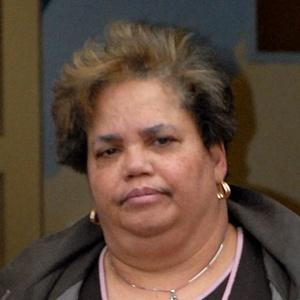