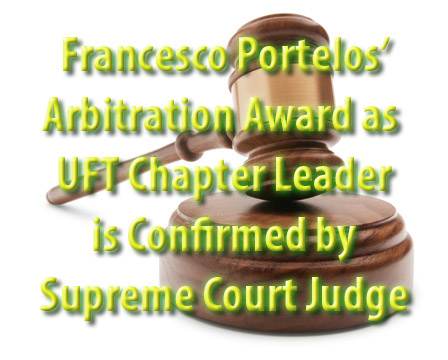 A great win for the staff and students of Berta Dreyfus Intermediate School 49 AND All UFT Chapter Leaders! Thanks to NYSUT and UFT.

As you may know, I am the duly elected UFT Chapter Leader for IS 49. I was elected after I was wrongly removed and have survived three attempts to be recalled and stripped of my title. Even before I took office I was raising legitimate concerns at IS 49. Once I became chapter leader, I at least had the UFT/DOE contract to back me. However, the DOE refused to adhere to our contract. I filed many grievances last year. They were denied by Principal Linda Hill and Office of Labor Relations reps (aka David Brodsky esq.)

In May of 2013, after months of ignored safety and educator rights violations, the case was finally heard before Arbitrator Jeffrey Tener. He decided in our favor. See post:

I then updated that post to include that the DOE Legal department decided to refuse to honor the arbitrator’s decision.They continued to refuse to allow me to function as a chapter leader and represent the educators of IS 49.

The arbitration decision concluded that the DOE should follow the remedy provided. That being:
“The grievance is sustained. The Department violated Articles 8, 19 and 20 of the
Teachers’ Agreement when it refused to meet with the grievant and refused to provide
him with school information necessary and required in his capacity as Chapter Leader.
As a remedy. it is directed to cease and desist from refusing to meet with Portelos and
refusing to provide him with necessary and required school information in his capacity as
Chapter Leader.”
This includes my role as a mandatory member of of the School Leadership Team that aligns NCLB funds with the school’s Comprehensive Education Plan.

The DOE lawyers will have a chance to appeal and most likely they will try.

Last Friday I held a UFT meeting at my school using Skype video calling and a projector. With this win, I should be able to function like all other Chapter Leaders and not need to do that again.

This win should set precedent for all targeted chapter leaders. If someone thinks they can attack a chapter leader and wrongly accuse them so they are removed, they should now think again. Sending them to the Rubber Room (that doesn’t exist) will not prevent them from acting as such.