NYC Dept. of Education Jails Whistleblower When No Crime Committed

It’s hard to believe that I was in a jail cell after DOE Chief Information Officer (CIO) Hal Friedlander made an allegation when no crime was committed. Meanwhile Principal Linda Hill admitted to stealing for years and over two dozen DOE employees, two chancellor’s and two mayors helped cover it up…no arrests, no fines…not even a disciplinary letter. I say “hard to believe,” but with a system full of corruption it is getting to be an easier pill to swallow.

You might have read the satirical blog post that got me arrested. If not, it is linked here. I refuse to take it down. This is the United States and as long as our students pledge allegiance to that flag, I will continue to speak up and out.How to Hack the DOE Payroll Portal and Give Yourself a Raise.

Before you read my interesting, yet awful, recount of my 33 hours behind bars, I want you to know more of what took place before March 10, 2013.

I sent it to DOE’s Chief Information Security Officer Desmond White since it was so ridiculous.

His boss, DOE’s Chief Information Officer (CIO) Hal Friedlanderthen sends this bizarre email to several employees admitting that I didn’t, and couldn’t, “hack thepayroll system” and then forwards it to the Chancellor’s attorney Courtenaye Jackson-Chase. I highlighted some interesting points. 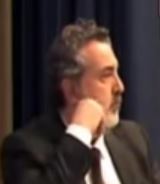 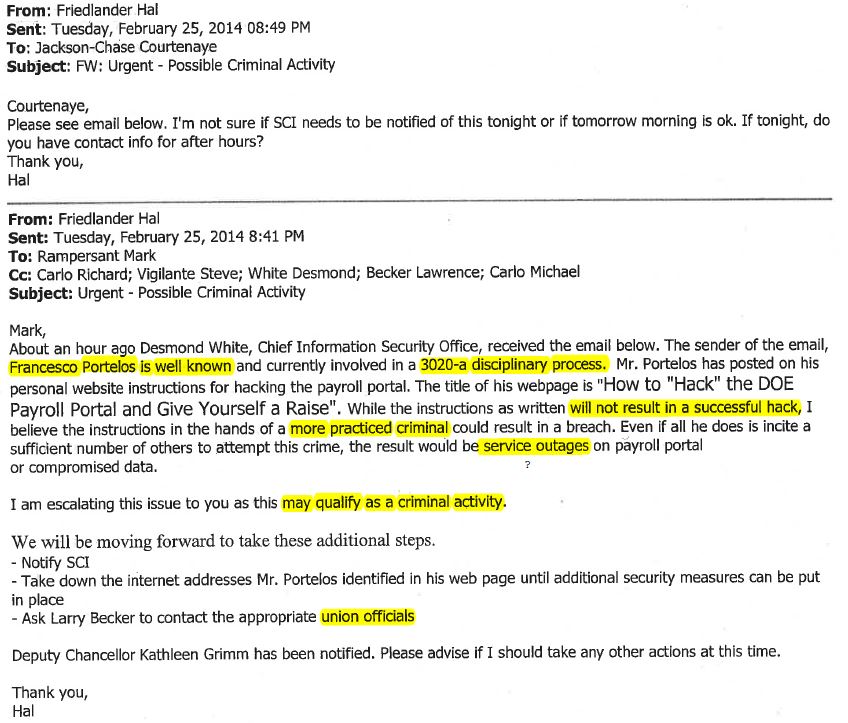 Meanwhile Desmond White goes to the NYPD and files an equally bizarre complaint.

Hal Friedlander, who moved to run Tech Ed Consortium techedconsortium.org before working at Princeton’s Tiger Challenge, Desmond White, who was demoted at the NYC DOE, and Attorney Courtenaye Jackson-Chase, who now heads now the Children Aids Society legal team, were not alone in the plan to “Keep Portelos Out of the Classroom.”

They had the assistance of Mark Rampersant, of the Office of Student and Youth Development. OSYD of course being the DOE entity that was giving Principal Linda Hill money hand over fist for work she wasn’t doing. Attorney Tracey Cooney, attorney Candace McLaren and DOE Chief Executive Officer of Human Resources Lawrence “Larry” Becker also joined in.

NYPD Lieutenant David Kalin and others at the NYPD also helped with the arrest. By the way, the password for “hacking the DOE payroll portal” was “kittensrcute” and that’s

If you haven’t read this, you should.

MY 33 HOURS BEHIND BARS

Falsely Arrested When No Crime Was Committed.

In July 2014, months after my false arrest… The DOE’s Office of Special Investigation also stated “not guilty.”

Makes you think how scared they were (are) that they had to falsely arrest me. A federal judge is currently deciding whether or not to include this false arrest into my Federal lawsuit.