A Big Victory for Transparency in NYC Schools 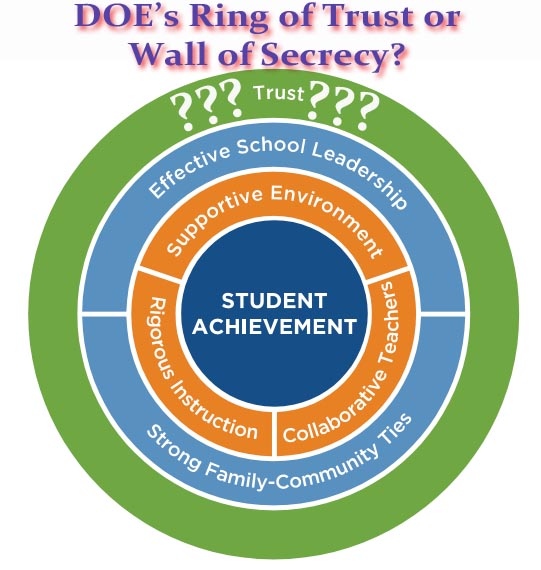 Trust has to be earned.

I’ve been so busy teaching and organizing that I didn’t have a chance to share this sweet, sweet victory from last week. Not my victory, but our victory; teachers, parents, students and the public as a whole.

If you’re familiar with my story, then you know I raised concerns at my school’s School Leadership Team back in 2011. It turns out that Principal Linda Hill was sitting at those meetings, getting paid, while she was paid for another program she wasn’t working simultaneously.

In addition to that she violated chancellor’s regulations and who knows what else. In any case, she exiled me from the school, I was elected UFT Chapter Leader, became a mandatory member of the SLT and was still forbidden from attending.Being the creative and cunning guy I am, I made an attempt to attend not as a chapter leader, but asa member of the public since I ama parent in the community. I was prevented from entering.

See an email from the Director of Labor Relations, David Brodsky, Esq. He’s one of thescummiest lawyers theDOE has. He’s bad for parents and bad for teachers. Joel Klein hired him in 2006 and Chancellor Farina kept him around to this day.

While I made this attempt,the New York State United Teachers took the case of me being prevented as chapter leader to the Supreme Court. There it failed, was dismissed and we went towards appealing it.

I have never met Michael Thomas, but while I was being hammered by the DOE’s lawyers, in an effort to protect the principal’s malfeasance, I was getting emails of support. One was from a guy named Michael Thomas in 2012. In September 2012,he wrote:

“Finally, remember the names of the lions at the main library: Patience and Fortitude. There is a terrible urge to lash out wildlyin protest ofinjustice. Resist the urge. The battle must be won in the courts, but cases must be legally sound.”

Little did he and I know that nearly three years we would be involved in an epic win with the courts providing that much needed justice. After I was barred from entering the SLT as a parent, I shared the news with Michael Thomas. He then asked for the SLT Chairperson’s information and sent a request to attend in 2014. The response was by the IS 49 SLT Chairperson was:

Michael
In an effort to assure all procedures were followed, I reviewed the SLT By Laws. During my read of said laws, I realized you would not be permitted to attend, even with prior notice, as you not a member of the school community. Our By Laws are quite specific as to whom is considered school community members and states that only such members may attend.

Fast forward he was denied access upon arriving at the school. He filed a suit. As both our cases progressed we made connection with Leonie Haimson of Classsizematters.com who connected with attorney Laura Barbieri and NYC Public Advocate Letisha James. I was convinced to drop my case, which had several angles, and allow Michael’s case to be the one to put all our chips on. I thanked the NYSUT attorneys and crossed my fingers that we made the right decision.

It worked and like I said before, we are allvictorious. The judge ruled a slam dunk decision and so far no sign of an appeal from David Brodsky and theDOE.

I therefore made a request to attend the next IS 49 SLT meeting and today received the following information.

Good evening,
I would like to attend the next IS 49 SLT meeting now that a judge has ruled that they are open to the public. Please let me knew the time and date. Thank you.

“The foundation of every state is the education of its youth.”-

Let’s see what happens. Three years ago I set out to make my small neighborhood school a better place and was thrown more obstacles than you could possibly imagine. I have not lost focus despite thevicious attacks and like Michael P Thomas originally advised, I exercised”Patience and Fortitude.“

In addition to thanking Letisha James, Michael Thomas, Leonie Haimson, NYSUT attorney Wendy Star and attorney Laur Barbieri, abig shout out is needed forATR James Calantjis who created sltsupport.blogspot.com. Had I not visited his site three years ago, I may not have learned Principal Linda Hill and SLT Chairperson Susanne Abramowitz had violated Chancellor’s Regulations and State Law.

Abstract: TheSupreme Court of the Stateof New York, New York Countyhas ruled that School Leadership Team (SLT) meetings are meetings of public bodies and, therefore, must be open to the general public under New York States Open Meetings Law (NYOML). It concluded SLT meetings involve a public body performing governmental functions. The court also found that an SLT operates as a decision maker, along with the schools principal, not as a mere advisor, in developing a comprehensive education plan (CEP), which involves a matter of public, rather than private, concern. As a result, it held that the New York City Department of Educations (NYCDE) decision that SLT meetings are not subject to NYOML is arbitrary, capricious and contrary to the law.

Facts/Issues: Under state law anddepartment of education regulations, everyNew York school must have an SLT. TheSLT iscomposed of a school administrator, teachers and parents who are charged with developing the schools comprehensive education plan and other tasks involving collaborative decision-making at the school.

Michael Thomas, a retired teacher, asked to attendan SLT meeting at IS 49 onStaten Island.After initially receiving permission to attend, he was informed by the SLTs chairperson that he could not attend because under the SLTs by-laws only members of the school community could attend. Thomas has no affiliation with IS 49. Thomas filedsuit.The Public Advocate for the City of New York, Letitia James, and Class Size Matters intervened in support of Thomas.

Thomas et al. argued that SLT meetings meet all the criteria for meetings specified in NYOML and, therefore, should be open to members of the public. NYCDE contended that SLTs play a limited advisory role in school governance and, thus, are not public bodies subject to NYOML.

Ruling/Rationale: The New York County Supreme Court held that SLTs are public bodies within the meaning of the NYOML, and, therefore, SLT meetings must be open to the general public. It indicated that it is well-established caselaw in New York courts that decisions made at meetings of organizations associated with publicly funded schools are governmental decisions subject to the Open Meetings Law.

Based on the factors set out in the caselaw, the court concluded that SLT meetings involve a public body performing governmental functions. It found that under thestates education laws SLTs are a vital part of school governance. It also noted that the publics interest in such meetings was demonstrated by the fact that state law requires public announcement of SLT meetings in accordance with NYOML.

Finally, the court stressed that anSLT operates as a decision maker, along with the schools principal, not as a mere advisor, in developing a schools CEP, which involves a matter of public, rather than private, concern. As a result, it held that the New York City Department of Educations (NYCDE) decision that SLT meetings are not subject to NYOML is arbitrary, capricious and contrary to the law. The court highlighted that the SLT acts in conjunction with the principal in formulating a CEP, making it a partner of the principal, as opposed to a subordinate.

[Editors Note: On April 23, 2015, Patrick Wall of Chalkbeat New York reported on the court ruling.A spokesman for the city law department said the agency is reviewing the decision with the education department in order to decide on a response. He wouldnt say whether they would appeal, adding only that the agencies are likely to discuss the possibility.Leonie Haimson, executive director of Class Size Matters, said an appeal would be pointless and a waste of taxpayer dollars, given this slam-dunk decision.]