Teacher was Retaliated for Engaging in Union Activity. A Small Win at PERB.

I remember the first time I heard the acronym PERB. It was when I sat for my first consultation with my attorney Bryan D. Glass, Esq. (ghnylaw.com). I sat in his office in May 2012 and, almost like a patient laying on a couch spewing stories to a therapist, I ran through a crazy tale of corruption, attacks and defense.

I explained that after becoming a parent in the school community, where I also taught, I became more involved in out of classroom activities, including being elected UFT union delegate and sitting on the School Leadership Team. I then went through the long list of disciplinary measures taken against me after partaking in these new roles. Bryan told me about the New York State Public Employment Relations Board (PERB). In sum and substance, an administrative law judge can hold a small trial to see if you were retaliated against for engaging in union activities. If so, then the employer probably violated Section § 209-a of the Taylor Law.

Union activities can include:

Running for UFT chapter leader or delegate.
Acting as union representative.
Filing a grievance.
Joining the UFT consultation committee.
…and other matters.

In addition to our Federal complaint alleging First Amendement retaliation, we filed a PERB charge against Principal Linda Hill and the NYCDOE.

Well, almost 5 years later and this is part of what we just received in the mail: 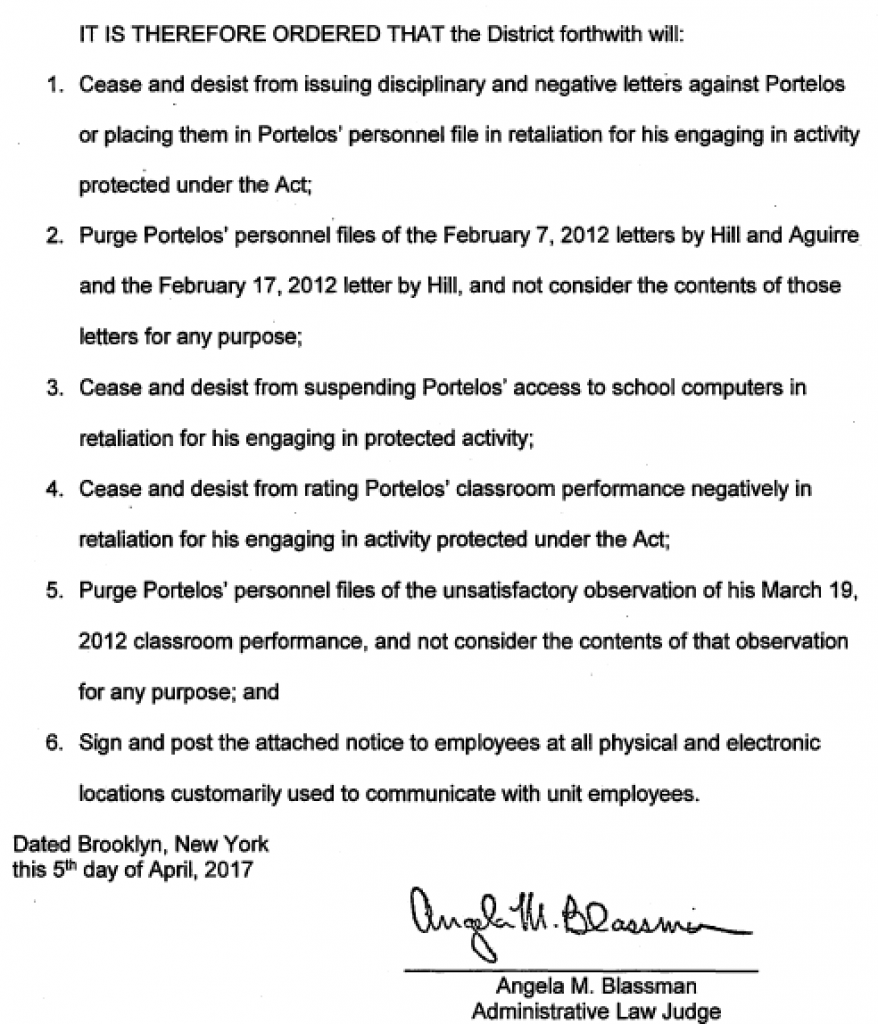 My file is much cleaner than it was and this is now the seacond person with authority that found retaliation by my employer. Although a bit dated, since some of this material was already removed, there were many benefits to going to PERB. On one hand, we had Principal Linda Hill on the stand. Bryan Glass grilled her and we were able to use some of the testimony in other matters. It also puts an employer on notice that you are fighting back. I recommend you use PERB and pack your complaint with a strong timeline showing retaliation after you engaged in some union activity.

Unfortunately this is something that my union discouraged. You almost never hear of the UFT taking cases to PERB when so many of our chapter leaders and delegates are attacked for speaking up on behalf of members.