[Note: there was an error and this did not post properly, so I re-posted.]

“In the time of chimpanzees, I was a monkey.” -Beck

Look, relax…it’s no big deal. We are just talking about the educational neglect of countless students and the squandering of millions of taxpayer dollars. Don’t get so worked up. I mean, the next time the cashier, or waiter, hands you a receipt and you see that three letter word, “tax“, think of me.

No, wait! …don’t think of me. This story…this site..that Tweet and that article…that’s not about me. It’s about us. All of us. A society that’s strategically broken. This issue is systemic.

It’s not on Bravo or TMZ…it’s not scripted or made up. Believe me when I say that there are times I think that due to an unknown micro-aneurysm I’m making this up and one day I’ll wake up staring at the hospital room ceiling.

“How long have I been out I’ve had the most bizarre dream.” I would mumble back.

“About 787 days.” She would respond (by the way, that’s how long ago I received my first two disciplinary notices and three investigations on the same day. In other words the day they aimed to fire me.)

[Ok I’m going to go with this scene a little more, because I’m picturing it myself and it’s funny. Also because I can…it’s my blog.]

“Angela, it was a crazy dream and…“as I look at the hospital staff that just walked in, “..you were there, and you, and you.”

I hope you got the “Wizard of Oz” reference.

Anyway, somebody pinch me already. Let’s move on.

I’m no cyber-bully by the way. A cyber-bully lies online and doesn’t back up what they write in real life. I do. See my latest speech to Chancellor Faria, DOE attorney Courtenaye Jackson-Chase, who approved my removal and everything else that they’ve done to me (us), and the entire Panel for Educational Policy.

-The DOE’s Office of Special Investigations continues to keep the financial misconduct cases against my principal and others wide open. 791 days. It’s a full on race. If my termination decision came out, then we can’t include their findings on record. If they substantiated the claims, then my attorney and I could open the record to include it.

Or call Chancellor Faria at 212-374-0200. She is well aware. Evidence of malfeasance could again be found here: ADMINISTRATOR MISCONDUCT

– SCI amended their report on me on their website. They included the memo about the “errors found” in the investigation. http://nycsci.org/reports/04-13%20IS%2049R%20Ltr.pdf

– Arrest update. I received some documents pertaining to the complaint made against me that landed me behind bars. It’s worse than I thought. DOE Chief Information Security Officer Desmond White was fearful for his safety I never even met the guy, nor world I recognize him. 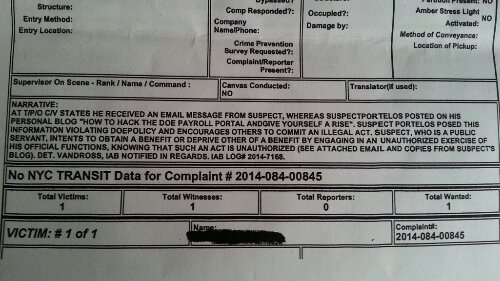 Que White Hispanic No offense to my Hispanic friends, but my name isn’t Francisco. Was this done in order to meet a strange quota

– The spin-off of this site, DTOE.org, is coming along, but slowly. Share your story there and nominate an abusive administrator.

– My defamation case against Richard Candia and Susanne Abramowitz was brought before an attorney working for the NYC Comptroller. They deposed me and every time he said “Ok, nothing further.” I interjected “Wait, I have more evidence.” This went on for a few hours.

– The City is still stalling on many discovery items they owe.

– Finally, I heard there is a manila folder with a Thank You card being passed around. It’s kind of like what they do with birthday cards to be signed around an office, when you don’t want the person to know. This one is written to Principal Linda Hill, Teacher Susanne Abramowitz and Teacher Richard Candia. Saying “Thank you for waking this Portelos guy with your lies.”